The Dark Inferno is a minor antagonist in Kingdom Hearts III, as a member of the Purblood Heartless faction.

The Dark Inferno first appeared in a part of the Badlands in the Keyblade Graveyard through a portal. This lead to it and Sora having a one-on-one fight, although the Dark Inferno was later defeated by Sora, leading to Sora collecting one of the many reports found in each world. If Sora were to open the portal again, he would have the ability to fight against the Dark Inferno once again.

When Sora went to search for Kairi and bring her back, he went into Ventus' dive to the Heart. There he noticed a voice calling itself 'Darkness', Sora originally though that it was Vanitas at first, though he later had to fight against a slightly stronger version of the Dark Inferno known as the Dark Inferno χ. Regardless, Sora fought against this Heartless and ended up defeating it.

The Dark Inferno appears to look masculine, it has two red horns on the side of it's head and a type of horn on top of it's forehead that resembles a heart shape, it also has a pair of small bat wings on it's shoulder blades. The Dark Inferno also carries around two lard swords, it has a scarf and two wheels on its legs that appear to be a type of light enegy. 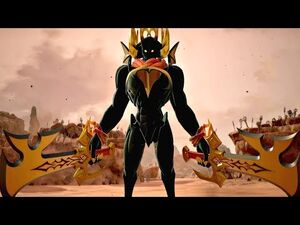