The Four Dark Judges (for the first four judges)

Each Dark Judges possess their own deadly supernatural powers

Stopping crimes of the world by cutting off life

The Dark Judges are a supernatural entities of extra-dimensional Judges from the Judge Dredd and IDW universes and are mass-murdering undead abominations who see life itself as a crime, since only the living can commit crime - going by this warped logic the Dark Judges must mercilessly pursue all beings guilty of the crime of living and put them to death.

The Dark Judges were originally a group of four lawkeepers from a parallel dimension known as Deadworld. They were led by Judge Death, who had determined that all crime was committed by the living - thus, by his logic, all life was a crime. The other three were slavishly devoted to him and his philosophy, and the four went around killing people on whatever justification they could find (Judge Fire sentenced a whole school to death for noise pollution). The society of the parallel universe they inhabited placed very little value on human life and many inhabitants were sadistic and violent, but even by the standards of their people the Dark Judges were vicious.

Things changed when Death encountered Phobia and Nausea (the future Sisters of Death) in a cave. The Sisters were death cultists and mass murderers with supernatural powers, and Death fell in love; the three of them committed acts on victims that he admitted sickened even him. With their help, he and his acolytes were able to become undead beings, thus being 'pure' to judge without hypocrisy. The Sisters would themselves become ethereal beings with hideous magical powers. The Dark Judges subsequently murdered the entire population of their world.

Judge Death in Mega-City One

Dimension-travelling visitors chanced upon the now 'Deadworld' and found the Dark Judges. After 'judging' (i.e., killing) them and taking their dimension jumping warp devices, Judge Death travelled to Mega-City One, against the opinions of his colleagues, in order to 'dispense justice'. Death was eventually defeated by the combined efforts of Judges Dredd and Anderson, his body having been destroyed, and his spirit form held inside Judge Anderson, herself encased in the miracle plastic Boing on display in the Justice Department's Hall of Heroes.

Having sensed Death's peril, his comrades Fear, Fire and Mortis crossed the dimension warp to rescue him. Released from imprisonment and with a new body created, the four Dark Judges continued their 'judgement' upon Mega-City One claiming thousands of victims. Dredd and Anderson intervened, and pursued the Dark Judges back to Deadworld using a Dimension Jump Globe liberated from the Dark Judges. There, the spirits of the Dark Judges' millions of victims flowed through Anderson and seemingly extinguished their spirits forever.

However, the Dark Judges were not destroyed but merely weakened, and four years later, Judge Anderson was duped into returning to Deadworld, where she was forced to resurrect them. Armed with teleporter technologies, the four returned to Mega-City One, leaving Anderson for dead. Anderson survived, however, and used the dimension warp technology against the Dark Judges, consigning them to limbo, the void between dimensions. This is where they were to remain for the next few years.

Following Judge Dredd's resignation and his replacement by the Judge Kraken , the sisters of Death - Phobia and Nausea - used their powers to influence Kraken and rescue the Dark Judges from Limbo. With the Mega-City One judge force under their control, the Dark Judges created Necropolis- the city of the dead, killing 60 million citizens. Judges Dredd, Anderson and Chief Judge McGruder, together with a handful of cadet judges, returned via the undercity to defeat them - returning the Sisters of Death to Deadworld, imprisoning Fear, Fire and Mortis within secure containment, and executing Kraken, who had become a fifth Dark Judge.

Judge Death eluded capture by hiding in the burial pits of the Cursed Earth and departed for another dimension, but was eventually captured by Dredd with the aid of Batman. Judge Death would escape several other times, with the most significant being when the Joker (see below) dimension-jumped to Mega-City One and freed the four prisoners when they were being transferred to a more secure prison. They entered a sealed hedonist community and slaughtered their way through it before Dredd, Anderson, and Batman could stop them again.

In 2124, Death was released again - after a series of child murders to bring out Anderson, he beat her into a coma so she couldn't track him, infected her with the supernatural Half-Life virus, and escaped into the Cursed Earth. He then went on a killing spree and searched for weapons of mass destruction, finally taking out Las Vegas before seemingly being dragged to hell by the angry ghosts of his victims. However, the Sisters of Death - now with three extra members - attacked again in 2127, striking blocks with poltergeist activity and plagues before Psi-Division drove them back; and during Death's time in the Cursed Earth, he created another undead killer named Mordechai to carry on after him.

In 2134, during a major Soviet-backed attack on Mega-City One, Soviet sleeper agent Judge Haldane used a forged warrant to enter the Dark Judge containment vault and open the containment vessels. He stole the imprisoned Fear, Fire, and Mortis, and with another sleeper agent he gave the Dark Judges physical form again. (They promptly killed the agents, to Haldane's horror.) They were later captured by genius serial killer PJ Maybe.

Later Death was freed from Hell by the Sisters of Death. He entered the home of PJ Maybe and rescued his brothers. They escaped from Earth on a spaceship, the Mayflower, and killed most of the passengers and crew. They were pursued by Dredd and Anderson, who managed to defeat them and left them stranded in space.

The Dark Judges are undead, and as such, cannot be conventionally killed. Their true forms are incoporial spirits that must inhabit corpses in order to cause physical harm. This involves obtaining recently deceased cadavers, which are subsequently processed by machinery that produces "dead fluids." These fluids bring the corpses to "full ripeness," prefatory for the spirits to inhabit and animate. The incarnate Dark Judges are emaciated, zombie-like humanoids with sharp claws that frequently serve for them to injure their victims. All four speak with a hiss.

Once incarnated, the Dark Judges don uniforms (or "robes of office") which reflect their identities. The uniforms are variants of the traditional judge uniforms, with specific modifications based upon the judges' personalities.

The Gang of Four

Judge Death wears a helmet similar to that of a traditional Judge, with a modified visor resembling a portcullis. His mouth is pulled into a rictus. In place of the Judges' eagle-shaped shoulder pauldrons, Death sports a pterodactyl on his right shoulder; his left shoulder and elbow pads are festooned with bones. His jacket is fastened with crude stitches rather than a zipper, and his badge and belt buckle are each shaped like a human skull with extended fangs, the latter is also adorned with bat wings. Death most often kills his victims by reaching directly into their chests (in an intangible state) and squeezing their hearts until they burst, without ever breaking the skin.

Judge Fire is immersed in flame, but otherwise his uniform resembles that of Death. He has a human skull for a head and wields a flame-spewing trident. As a human, he was an undercover Judge named Fuego who had infiltrated a resistance group, which he eventually led to the newly-created Judge Death to become his first kills. He earned the name Judge Fire when he was human, for burning a school down for breaking noise regulations at playtime.

Judge Fear is an imposing figure with a black, iron helm obscuring his face, which he will open before his victims to frighten them to death with whatever lies within, often saying "gaze into the face of Fear!". Judge Dredd, however, was able to resist long enough to punch Fear through the head, replying "gaze into the fist of Dredd!" (it is worth noting that Dredd however is far from an ordinary human - capable of taking immense physical and psychological damage that would cripple or kill an ordinary human).

The actual face under the helmet has only been seen once, as a mass of eyeballs - although no explanation was given whether it was his actual face, or a representation of Fear's manifestation of the person watching's greatest terror. Fear has an assortment of bear traps dangling from his belt, and is known to throw them at his enemies in order to immobilize them; it also holds an enormous padlock which he uses to secure his victims' potential exit routes. He wears a thick robe with ornamental bear traps on the shoulders. His belt buckle is a shrunken head.

Judge Mortis is in a perpetual state of disintegration, and his touch causes his victims to decay extremely rapidly. Like Fire and Fear, he spent his early years as a trainee Judge at Law School, Deadworld's equivalent to Mega-City One's Academy of Law, and graduated after Judge Death. He quickly developed an admiration for Sidney's methods and beliefs and became one of his three lieutenants, sharing his comrade's zeal for passing arbitrary death sentences.

He is sometimes employed by Judge Death to prepare the Dark Judges' host bodies. Mortis's head is a sheep skull and he has a bony tail. His uniform's right shoulder is a bird skeleton, and his left shoulder is protected by a perforated mantle. His badge is a stylized horse skull, with his name emblazoned in wood.

The undead incarnations of Nausea and Phobia normally only appear as spirits, although they do appear in their mortal form in the Judge Death prequel story, Young Death: Boyhood of a Superfiend.

The Dreams of Deadworld arc in the September 2015 2000 ADs introduced dark judges that existed on Deadworld prior to a coup by Death and his three lieutenants. They were:

In February 2014, IDW announced that nine new Dark Judges were to premiere in a forthcoming Judge Dredd title.The IDW Dredd is usually considered non-canonical. The new judges were:

The Joker as a Dark Judge

For a very brief time, DC comic's The Joker character was a Dark Judge, in the original graphic novel Die Laughing (1998). The Joker helped free the original Dark Judges in exchange for immortality. He received his payment by having his spirit merged into a corpse (which was not quite the "immortality" he'd sought), creating "Dark Judge Joker". As a Dark Judge, the Joker could kill masses of people with his laugh which caused human heads to explode.

His tenure was a brief one, as he quickly became bored with slaughter simply for its own sake and did not share the original Dark Judge's fanatical zeal for their "sacred mission" of purging all life. The Joker was restored to his normal, mortal form upon returning to Gotham City via a defective dimensional jump device. 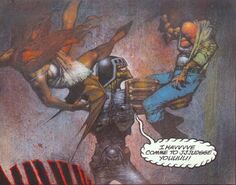 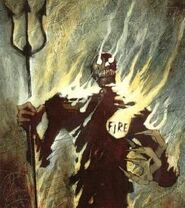 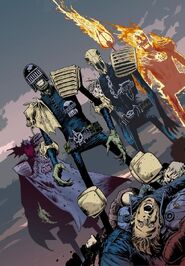 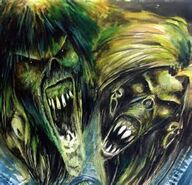 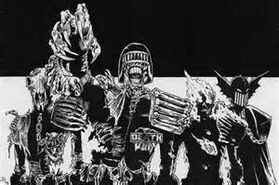 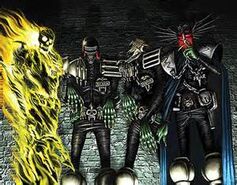 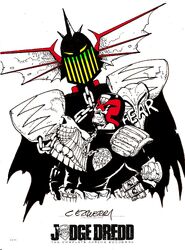 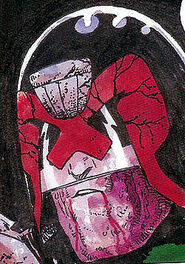 Judge Kraken as a Dark Judge.
Add a photo to this gallery
Retrieved from "https://villains.fandom.com/wiki/Dark_Judges?oldid=3017206"
Community content is available under CC-BY-SA unless otherwise noted.