All the supernatural powers of Shao Kahn and Darkseid

Enjoys watching others fight to the death.

Rule both the Mortal Kombat and DC universes. (Failed)

Dark Kahn is the main antagonist of Mortal Kombat vs. DC Universe. He is the combined form of both Shao Kahn and Darkseid.

Darkseid and his Parademons were defeated by Superman. Darkseid tried to escape by using a dimensional boom tube, but Superman used his heat vision and disrupted the boom tube, causing it to explode, with Darkseid in it.

Superman thought that Darkseid was killed, but Darkseid did not die. Instead, he merged with Shao Kahn, and they became Dark Kahn.

At the exact same time, after Shao Kahn was humiliated by his defeat at the hands of Raiden, he attempted to escape through one of his portals. However, Raiden shot Shao Kahn with a bolt of lightning, causing the portal to explode, with Shao Kahn inside it.

Raiden thought that Shao Kahn was killed. However, Shao Kahn didn't die. Instead, he merged with Darkseid, and they became Dark Kahn.

The Merging of Two Worlds

When Darkseid and Shao Kahn merged together, this also caused the Mortal Kombat world and the DC World to merge. Besides this, other negative events occurred as well. Some include; powers of certain heroes and villains began to flux, and they all started to have uncontrollable rage. Eventually both the Mortal Kombat and DC Universe Characters found out what was the cause of the merging and their uncontrollable rage; a new entity named Dark Kahn, which is the dark form of Darkseid and Shao Kahn.

They also found out that the merging happened shortly after Superman "killed" Darkseid, and Raiden "killed" Shao Kahn. In order to put everything back to normal, enemies and allies would have to team up and confront Dark Kahn. However, the Mortal Kombat Characters didn't know that the DC Characters wanted to defeat Dark Kahn and bring everything back to normal, and vice versa with the DC Universe Characters with the Mortal Kombat Characters.

When the Mortal Kombat Characters and the DC Universe Characters entered the merged world of Apokolips and Outworld, Dark Kahn was expecting them. He used his power of rage and force everyone to fight each other to the death. Nobody was killed during all of this, most of them were just knocked out. The only ones that were standing after the confrontation were Superman and Raiden. The two enter Dark Kahn's lair to confront him and to finally end the madness. Just as they were about to confront him, Dark Khan uses the power of rage to force Raiden and Superman to kill each other. However, after fighting each other, both of them managed to fight through the rage, after which the two found out that they both had the same agenda.

The two decided to team up and confront Dark Kahn. In the end, Superman and Raiden managed to defeat Dark Kahn. When Dark Kahn was defeated, everything was back to normal, except for two differences: Darkseid was trapped in the Mortal Kombat World, while Shao Kahn trapped in the DC Universe World. When they were in the other worlds, the two were powerless, resulting in them being easily imprisoned by the main heroes (and even some of the villains). Darkseid was tethered in the Neatherrealm, while Shao Khan was imprisoned in the Phantom Zone.

When Sub-Zero and Raiden arrived to the Injustice universe, Raiden suggested they should get prepared for Dark Kahn's return.

Dark Kahn is mentioned by one of the Joker's starting dialogues against Kotal Kahn in Mortal Kombat 11. 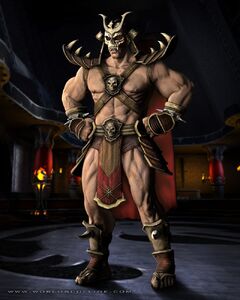 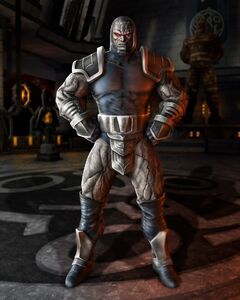 Darkseid, second half of Dark Kahn.
Add a photo to this gallery

Retrieved from "https://villains.fandom.com/wiki/Dark_Kahn?oldid=4327871"
Community content is available under CC-BY-SA unless otherwise noted.