Dark King is described as the most evil existence in this series. He loves destruction and wants to accomplish eternal life, since the Power of Destruction is killing himself. For his sake, he destroyed he Garden of Light and and stole five of the seven Prism Stones. He is impatient and threats his henchmen when they were not able to steal the two remaining Prism Stones. While Ilkubo, his most royal and strongest henchman at that time, was beating the Pretty Cures down, the extremely cold-hearted Dark King just killed him for the reason that Ilkubo could damage the Prism Stones. Since he see the Power of Creation as his rightfully property, he cruely consumes the suffering Seeds of Darkness who betrayed him.

The Destruction of the Garden of Light

The Power of Destruction of the Dusk Zone began to kill the Dark King, so he decided to steal the Prism Stones and to get the Power of Creation. However, he and his henchmen did steal only five of the seven stones and the two remaining stones were send to earth. Then, he entrust the Prism Stones to his henchmen Ilkubo, Poisony, Kiriya, Gekidrago and Pisard and send the last one to earth who had to steal the two Prism Stones which are protected by Mepple and Mipple.

Dark King is first shown after Pisard's first failure and he orders to steal the two Prism Stones. He threats him several times, but after Pisard's final defeat and the loss of s Prism Stones, Dark King sends Gekidrago who fails like his predecessor, too, and another Prism Stone is collected by the Pretty Cures. After then, Poisony and Kiriya take this task, but Poisony is eventually defeated and Kiriya betrays the Dark King, resulting the loss of two more Prism Stones. Dark King's last Prism Stone, held by Ilkubo, is eventually taken by the Cure Black and Cure White. However, Ilkubo handles to steal all seven Prism Stones and is about to hand over them to Dark King in the Dusk Zone. But the two Cures are fighting Ilkubo who is eventually beating them down, however, Dark King just kills him because he could damage the Prism Stones. The angered Cures attack Dark King with Marble Screw which is blocked by himself. Unfortunately for him, the Queen supports the two girls and gives them a little bit of her power and the Cures can destroy Dark King's body.

Resurrection and the Final Fight

Right after his body is getting destroyed by the Cures, he sends the Seeds of Darkness to earth Juna, Regine and Belzei Gertrude are born. They are able to resurrect him, but he still needs the Prism Stones or the Power of Destruction will kill him. Those henchmen do steal the Power of Creation from Pollun, but they use that power for themselves and get independent from Dark King. In the Dusk Zone, the Seeds of Darkness fuse to the Giant and fight on the one hand Dark King and on the other hand the Pretty Cures. While the Cure attack the Giant with Rainbow Storm, Dark King consumes the Giant and receives the Power of Creation. He enters in the Garden of Rainbows, uses his power to destroy the world, but Cure Black and Cure White fight him back. First, it seems that the Cures do not stand a chance against Dark King, but then, Pollun transfers the Power of Light to the two girls who overcome Dark King and eventually kill him with Rainbow Storm. 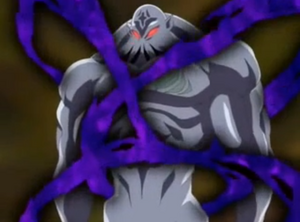 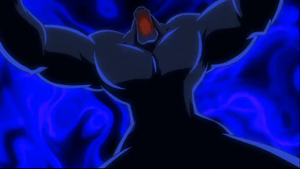 Retrieved from "https://villains.fandom.com/wiki/Dark_King_(Futari_wa_Pretty_Cure)?oldid=3784941"
Community content is available under CC-BY-SA unless otherwise noted.