Destroy the Earth via the Death Ball.

Dark Laser is a recurring antagonist in The Fairly OddParents. He first appeared in the episode "Hard Copy", as a toy from the catalogue that Timmy made come to life with his magic copier. He is a parody of Darth Vader, a core villain from Star Wars.

He was voiced by Kevin Michael Richardson, who also voiced the Joker in The Batman, Black Samurai in Scooby-Doo! and the Samurai Sword, Ian the Gator in The Princess and the Frog, Goro in Mortal Kombat, Sarevok Anchev in Dungeons & Dragons: Baldur's Gate, Captain Gantu in Lilo & Stitch, Trigon in Teen Titans Go!, Shredder in the 2012 Teenage Mutant Ninja Turtles animated series, Carlton Duquesne in Batman: Mystery of the Batwoman, Prince John in House of Mouse, Crunch Bandicoot in Crash Bandicoot, Temutai in Kung Fu Panda: Legends of Awesomeness, Floronic Man in Batman and Harley Quinn, Skulker in Danny Phantom, Gorilla Grodd and Captain Cold in Lego DC Comics Super Heroes: Justice League vs. Bizarro League, Jabba the Hutt in Star Wars: The Clone Wars, and Floronic Man in Batman and Harley Quinn.

Dark Laser has attempted to go through with a number of evil plans, as in his first appearance he made the Death Ball, parody of the Death Star . In "Escape from Unwish Island", he helped Imaginary Gary to defeat Timmy . He also pretended to have his own university in "The End of the Universe-ity" to recruit Timmy over to the dark side. Dark Laser also has a toy dog named Flipsie, which was also made by Timmy in the magic copier, and then Dark Laser stole him as his companion and fellow toy pet. Dark Laser was also recruited in Timmy's army to battle the Darkness, specifically to find a powerful wand on the Blue Moon of Vegan 6. He was also briefly incinerated in Dread N' Breakfast, but brought back to life by Wanda because Timmy didn't actually want to kill him.

In one ocassion, Dark Laser (tired of being contiuously defeated by Timmy Turner) decided to recruit him giving him a scholarship for his school, Dark Mouth University, to show him the greatness of the Dark Powers (a evident parody of The Dark Side of the Force) compared with Fairies Powers (suddenly a parody of The Light Side of the Force). After use against the Da Rules and enrolls in school, his first lesson is to destroy the Earth. But Timmy reform and turns against him, destroying his Death Ball once more.

In order to lure Dark Laser to Earth to use his spaceship, Timmy Turner created a TooYube parody of Dark Laser. The video featured Dark Laser sticking his butt out and making fart noises. The video reached over a million views in a matter of seconds. Dark Laser quickly came to Earth to destroy Timmy, but was convinced into helping him get to the Blue Moon of Vegan.

Dark Laser wears a purple space suit that comes with a huge cape and helmet, and speaks in a deep voice, reminiscent of the real Darth Vader. It is unknown if he is a human, toy, or even an alien, although the latter seems most likely as he has an army of space robots at his command, and wants to dominate Earth once Timmy Turner is out of the way. Dark Laser also has a variety of buttons on his suit which can transform him into different objects, such as a life raft, hinting that he may also be a giant living toy. Timmy and Tootie use the threat of pressing these buttons on Dark Laser's suit against him.

Dark Laser was originally just a toy, the leader of a series of toys modeled after the Empire from Star Wars (called Space Wars in the series), with Dark Laser himself being a parody of Darth Vader. When Timmy's magic copy machine brought Dark Laser to life, he quickly set off to cause destruction in Dimmsdale. After being defeated by Timmy, Dark Laser swore revenge, and has resided in space actively trying to trick Timmy Turner and lure the boy to him, so that he can destroy him. It is virtually unclear if Dark Laser is an alien, a toy, or a robot, though he considers his attacks on Earth as an "invasion".

Dark Laser is extremely cunning, unscrupulous, arrogant, evil, uncaring, manipulative, and diabolical, although like most other villains, his own incompetence is usually his worst enemy more so than Timmy. He also tends to do a weird laugh where he will mumble something quickly in between his laughter, which are usually repeats of what he said before. Dark Laser showed a small shred of kindness toward Timmy by lending his spaceship to him to help find his family during "Wishology", although he was back to his old evil ways by the end of the special. 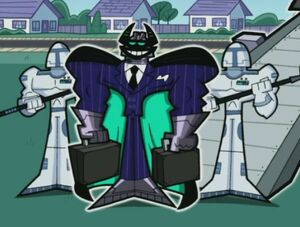 Dark Laser manipulating Timmy's parents into sending Timmy to his side, impersonating as "Professor Laser". 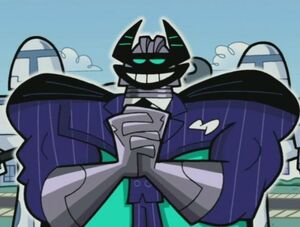 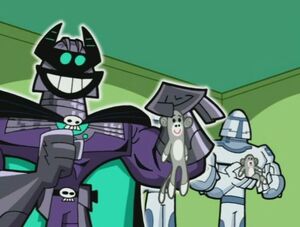 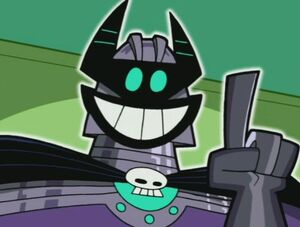 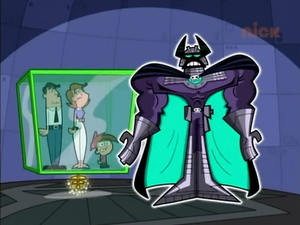 Dark Laser after capuring Timmy and his parents, intending to use them for his zoo. 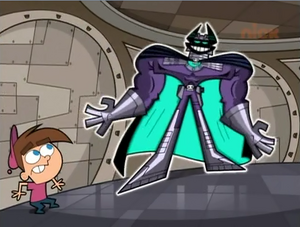 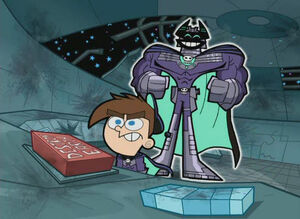