Dark Link is an evil doppelganger of Link who appears as an enemy in many The Legend of Zelda games. His battles are often thought of as the hero Link overcoming the darkness within himself. He is the most recurring minor boss character in the franchise.

Though there are slight differences in how each piece of media presents him, Dark Link is one of the most enigmatic characters in the entire series, lacking any definite origin backstory whatsoever.

This history of the Dark Link entities is organized into the latest "official Zelda timeline". This may change completely in the future, as the timeline given is merely meant as an example, and there have been official timelines before it.

The Unified Timeline refers to events before the split in The Legend of Zelda: Ocarina of Time and thus occurs in every timeline, the split happens in the final battle with Ganon.

Dark Link appears in The Legend of Zelda: Ocarina of Time as a mini-boss in the Water Temple, as he was sent there by Ganondorf. Here he copies Link's attacks move-for-move. For every hit Dark Link takes, his attacks become increasingly more aggressive, as well as him becoming more opaque and less transparent.

In the manga, Dark Link comes out of the well in Kakariko Village and attempts to kill Link; he is able to match Link, but is defeated after Link uses a new skill. The two then have a horseback battle, with Dark Link using his own Dark Epona. Link and Epona manage to defeat Dark Link and Dark Epona after a brief battle.

This is the timeline where Link was sent back to the past and was able to warn the Royal Family of Ganondorf's treachery, leading to the events of The Legend of Zelda: Twilight Princess' backstory.

He also makes a small cameo in The Legend of Zelda: Twilight Princess in a flashback, where Dark Link is used to represent evil beings named the Dark Interlopers. It is unsure if they separate entities or the same being.

This is the timeline where Ganondorf was sealed after ruling Hyrule and then being defeated by Link; he eventually escaped, leading to the backstory of The Legend of Zelda: The Wind Waker.

The Legend of Zelda: Spirit Tracks

Dark Link appears after Link manages to get to the end of the Take 'Em All On game in Castle Town. He attacks using a copy of Link's sword, bombs, and Bow & Arrow.

This is the timeline where Ganondorf killed Link in his final battle with him, leading to the Imprisoning War described in A Link to the Past's backstory.

After braving the Palace of the Four Sword and destroying the four entities guarding it, Link faces off against four Dark Links, which each wear a different colored tunic: Green, Orange, Blue, and Purple. After they are defeated, the curse on the four sword is broken.

The Legend of Zelda: Oracle of Ages

Four Dark Links are created by Veran in the final battle against her. These Dark Links do not attack and die in one hit; though they are dangerous obstacles, they move opposite of Link. 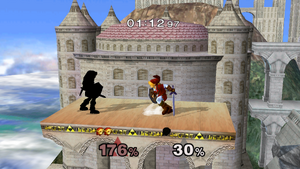 Link fighting with the Dark Link. 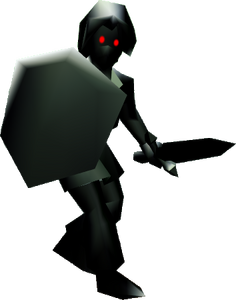 Dark Link in Legend of Zelda: Ocarina of Time. 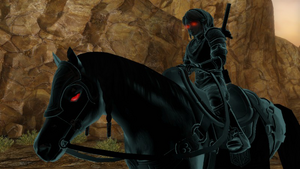 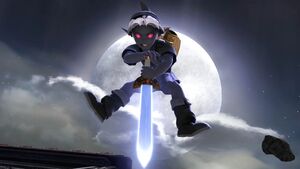