Fighting The Chosen One (formerly).

Destroy the Chosen One (failed).

Destroy the animator's computer (succeeded).
Infect computers around the world with the ViraBot virus (failed).

In "Animator vs. Animation III", the Chosen One (who had been enslaved and used as a pop-up blocker) escapes and once again begins fighting the animator's mouse pointer. The battle continues on to a Word document where the animator and Clippy fight the Chosen One using text-based attacks. As the Chosen One and the paper clip fight, the animator creates a new red stick figure, the Dark Lord, to be the Chosen One's equally powerful enemy.

However, it is revealed in the Animator vs Animation Shorts episode "The Flashback" that the Dark Lord and the Chosen One were able to escape into the internet just before the computer was destroyed. The two stick figures then proceeded to spread chaos and destruction across the internet, to a point where even the Chosen One was appalled by the Dark Lord's ruthlessness and depravity. 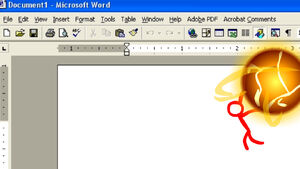 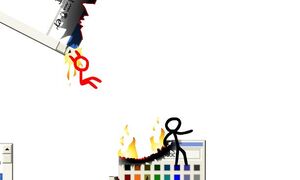 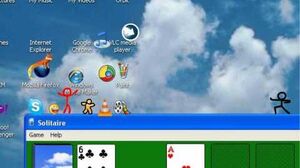 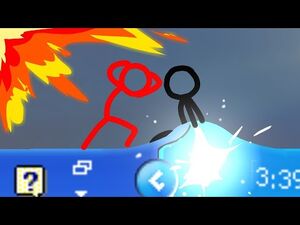 The Flashback - Animator vs. Animation Shorts Episode 3
Add a photo to this gallery

Retrieved from "https://villains.fandom.com/wiki/Dark_Lord_(Animator_vs._Animation)?oldid=3562186"
Community content is available under CC-BY-SA unless otherwise noted.