Putting Mii's faces on other creatures

Stealing Mii's faces and putting them on his minions.

Take every Mii in Miitopia's face and then take over (failed).

Stealing Miis' faces and placing them on monsters

Hegemonic Dark Lord
The Dark Lord (in Japanese: 大魔王), is the central antagonist of the Miitopia fantasy RPG, which is based upon the Nintendo Wii player-avatar system (refered to as Miis) - like many aspects of the game the Dark Lord can be customized by players (for example his name is not set, instead it is chosen by the player - he will always have the title of Dark Lord, no matter what name or face the player may create for him) but always has the goal of terrorizing the Miis and causing havoc in his surroundings, true to his title.

The general plot of the game is that the Dark Lord has amassed great and terrible magic which he uses to take the faces of Miis and place them into monsters, leaving his victims faceless and in despair - he enjoys inflicting misery not just in his victims but in others, as he forces family and friends to watch as their loved ones are transformed by his evil magic.

In the end, however, his evil ways are put in danger when the player-controlled Mii is called upon by divine powers to put a stop to the Dark Lord and his reign of terror - alongside multiple friends (which make up a traditional "group" found in fantasy RPGs).

An employee at a banana factory encountered the Dark Curse locked inside a wooden chest. The Dark Curse falsely promised him power and wealth so it could earn his trust and take over his body. Now as the Dark Lord, it began to steal other people's faces and place them upon monsters. The protagonist of the game came across the Dark Lord who appeared in the town of Greenhorne and stole some faces of the residence there. As soon as the Dark Lord finds the hero after him, he encounters them and places the face of a sassy child on a Mini Slime before leaving him to his battle.

As the game progresses, the hero recovers the faces of the Dark Lord's victims, as well as getting a class of power and some teammates along the way, and faces the Dark Lord again. This time, the Dark Lord summons an energy ball and is about to unleash it upon the hero until the Great Sage appears and stops him. The Dark Lord soon disappears from the sage's arrival.

In retaliation, the Dark Lord kidnaps the heroes' teammates, as they were staying at an inn, and seals away the hero's power, making the hero choose another type of job. The hero encounters new teammates in the desert of Neksdor and a mischievous genie causing trouble there, such as stealing gold from the Desert Celebrity, who the Great Sage informed the hero about and was freed by the prince due to his depression of losing the favor of the princess. After the hero defeated the genie and threatened to imprison him in the lamp, the genie is forced to redeem himself by returning the gold and apologizing to the Desert Celebrity for his actions. Just then, the Dark Lord appears and steals the faces of the Dancing Guide, the Shady Merchant Family, the male member of the Prickly Couple, the Desert Celebrity, and the Genie of the Lamp. After the hero manages to save all but the genies' faces, they go to the Great Pyramid where the Dark Lord is. The Dark Lord attaches the genies' face to a Pharaoh's head, who he calls as the strongest of his minions, before leaving the hero to their fight with it.

After defeating Pharaoh Genie, the Dark Lord kidnaps the hero's friends and seals their powers away a second time. He then moves on to the land of the elves, the Realm of the Fey, where he is easily fended off by the three sister guardians, the Fab Fairies. After a fierce battle with them, the Dark Lord seemingly retreats, but is then revealed to be a ploy to let the Fab Fairies' guard down for his monster minions to capture the older two sisters. The youngest Fab Fairy flees in terror and then shortly runs into the hero who just arrived at Elven Retreat. After she tells them about the situation, the youngest Fab Fairy accompanies the hero's new party to save the two older sisters. They first venture to the Citrus Cave where the Middle Fab Fairy is being held captive and has her face placed on a giant spider. After defeating it and saving the Middle Fab Fairy, the youngest stays behind in Elven Retreat while the Middle Fab Fairy now accompanies the hero on the quest to save the oldest Fab Fairy sister. The oldest Fab Fairy was held at the Bigg Forest where her face is placed upon an owl. The hero and their party managed to defeat the monster and recover the oldest Fab Fairy's face, and once the Fab Fairies reunite, they perform a magical dance to open the gate leading to the east for the hero. However, the Dark Lord then appears and steals the youngest Fab Fairy's face, making the hero and the Fab Fairies return to Elven Retreat, and once they returned there, they discover the Dark Lord has also stolen the faces of the the Fab Fairy Fans, Scaredy-Cat and the Mischievous Witch. After the hero rescues the faces scattered around the Realm of the Fey, including the youngest Fab Fairy, the Dark Lord becomes outraged by it once again and kidnaps his team, but could not steal his powers that time, and retreats to his castle in Karkaton.

After the hero and their teammates reach the Dark Lord in his castle and defeat him, the Dark Curse exits the former banana factory worker's body, reverting him back to his own self. The Dark Curse then attempts to possess the hero, but the Great Sage shields them with his own body and is possessed instead, transforming the Dark Curse into the Darker Lord, who then teleports away.

To rescue the Great Sage, the hero and their teammates enter the Darker Lord's residence, the Sky Scraper, where he steals the face of the factory worker who used to be the Dark Lord, and attaches it to a lookalike of the Dark Lord called the Phantom of Evil. After the hero and their teammates defeat it and rescue the worker, they ask to join the the hero's team (and will do so even if the player answers "no"). In battle, the worker's only attack is a rock throw that only does 1 point of damage, but they can also create HP Bananas for teammates that are low on health.

When the party goes to Otherworld to defeat the Darker Lord, the factory worker stays behind, stating that ordinary humans cannot survive for long in Otherwold.

After the teams defeat the Darkest Lord's hands, he will steal their faces and absorb them, becoming even more powerful, leaving the hero and their remaining three friends to fight the Darkest Lord.

After the Darkest Lord's defeat, the former factory worker takes a job in New Lumos, a city where the Dark Lord's most dangerous monsters, which even he was unable to control, have settled, warning people who blissfully wander there of the danger, including the hero when they go there. However, the hero ignores their warning and goes into the city anyway. After talking to him, the eight districts of the city are unlocked. 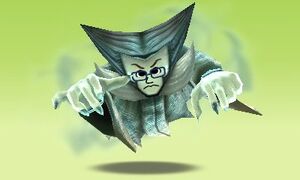 The Phantom of Evil, the monster the Ex-Dark Lord's face was placed on.
Add a photo to this gallery

Retrieved from "https://villains.fandom.com/wiki/Dark_Lord_(Miitopia)?oldid=3357658"
Community content is available under CC-BY-SA unless otherwise noted.