Dark Lord Gaol is a character making her debut minor villain in the Video Game: Kid Icarus Uprising. She was one of the members of Medusa's Underworld Army.

Gaol was a childhood friend of Magnus. The two used to team up with each other and fight when they were part of the same mercenary group. It's also revealed that she volunteered to spy on the Underworld Army, but was later captured and forced to wear the cursed armour of a dark lord, making her into nothing more than a slave to the very evil she fought against.

As Pit and Magnus entered the throne room of Gaol's Castle, they come across the Dark Lord Gaol. Gaol immediately proceeded to fight both Pit and Magnus.  After a long battle Pit and Magnus manage to defeat Gaol. After getting defeated by Pit and Magnus, Gaol's armour falls apart with her face revealed.

Though Pit regrets having to fight her, he was relieved to learn that Gaol is only knocked unconscious.

Three years later, Gaol, along with Magnus, returns to participate in testing Pit's skill during the Three Trials. Pit must face and defeat both of them in order to complete the trials. For the past three years, Gaol apparently was attempting to master the armour. After three years, she managed to master the cursed suit of armour so that it no longer controls her, since her voice isn't warped and the fact that she now intends to help Pit to defeat Hades as their mid-battle chat shows. 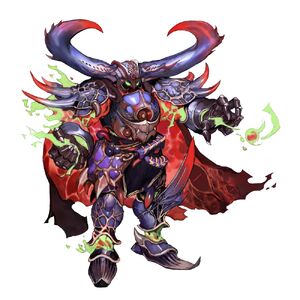 Retrieved from "https://villains.fandom.com/wiki/Dark_Lord_Gaol?oldid=3845916"
Community content is available under CC-BY-SA unless otherwise noted.