Dark Lovers are the group of water demons, with no official leader of the group of 4. They protect and serve Gaito.

They were all created by Gaito. They were ordered to capture the mermaid princesses, failing every time. The only mermaids that were captured was Coco and Yuri and Gaito captured Noel when she protected Rina.

They also compete with each other for their master's affections. The closest being Maria. At the end of season 1, they gave up their physical form to assist Gaito in fighting the mermaids. They are later seen in their original form in the throne room with Gaito and Sara, when the castle sinks to the bottom of the sea/ocean. At the end of season 2, they are seen with the whole cast of both seasons, singing. It is unknown if the whole thing was just a play or not. 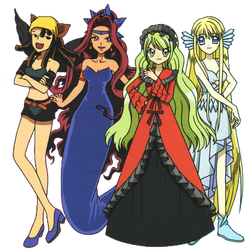 Retrieved from "https://villains.fandom.com/wiki/Dark_Lovers?oldid=3567824"
Community content is available under CC-BY-SA unless otherwise noted.