Dark Man, or Dark Men for plural, is a series of four robots that were created by Dr. Wily, one of which was created to frame Proto Man, taking his form. They appear in Proto Man's Castle, each occupying their own individual stage, and are the main antagonists in Mega Man 5.

Dr. Wily created the Dark Men intending on getting his revenge on Proto Man for spoiling his last plan. He gave each Dark Man a different ability. The first one can roll around and shoot, the second one can create electric barriers, the third one can freeze the target and shoot like a machine gun, and the last one being able to shoot, use electric barriers like the second Dark Man robot, and shape-shift. The last Dark Man disguised himself as Proto Man to frame him for his crimes, attacking the city with his army of Robot Masters. He kidnaps Dr. Light, leaving his scarf behind, making Mega Man believe that Proto Man became evil. Mega Man defeats the Robot Masters and goes after him to his castle. There, he fights the first three Dark Men, and finally meets with the fake Proto Man. Mega Man refuses to fight, and the fake shoots him, draining his HP to near-death. It's then that the real Proto Man appears and unmasks the Dark Man, and gives Mega Man an L-Tank to recover his health before fighting Dark Man. Mega Man fights him and defeats him, discovering that it was all another plan of Dr. Wily.

In the 1994 Mega Man Cartoon, The second Dark Man robot makes an appearance in the show (referred only as Dark Man) in the episodes The Day the Moon Fell and Brain Bot. Instead of using electromagnetic barriers, he instead uses an unnamed net-like energy weapon that works the same way, deflecting all blaster shots. While the other Dark Man robots do not appear, Dark Man robots 1 and 3 appeared in the tape of the Mega Man cartoon promotional pitch. Dark Man here was voiced by Garry Chalk, who also voiced Guts Man in the same cartoon.

Mega Man: Upon A Star

All four of the Dark Man robots have a brief appearance in the Mega Man: Upon a Star OVA Anime in the first episode Appearance in Japan. Here, they occupy the Wily Castle, just like their game counterparts.

Dark Man 4 appears in Super Smash Bros. Ultimate as a novice support spirit that makes the fighter start the battle with a Rage Blaster. His spirit battle is a stamina battle against Mega Man on the Battlefield form of Wily Castle. When defeated, three Samuses appear representing the other Dark Men with extra shield durability. 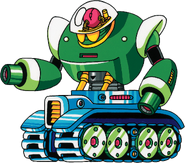 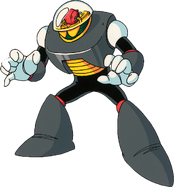 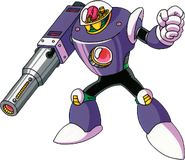 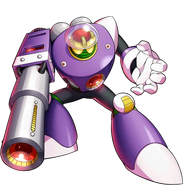