Leader of the Villain League

Mentor Max and help him become a supervillain and successor.

Destroy the Thundermans and take over Hiddenville with Max to build his evil empire. (both failed)

Shooting someone into space

He is voiced by Jamieson Price but is portrayed by Omid Zader.

Like every great villain Dark Mayhem keeps himself a mystery, so we don't really know a lot about him. He wears a black cloak and a metal mask and speaks in a booming, Darth Vader like voice.

Even though he is a highly famous villain, he still manages to try to take in Max Thunderman, although the way he approaches Max isn't really the most respectful way. He seems to be a very degrading, tormenting, conniving, jerk, but then again, what evil villain isn't? If you had to use one word to describe Dark Mayhem, it would be that he is evil and that's what makes him one of the greatest villains in all of history.

Dark Mayhem seems to be very impatient as seen during his calls with Max and Dr. Colosso. He easily gets mad when someone loses focus of what they're discussing. When he gets angry, he causes the electricity in the room to start flickering and generating sparks. Phoebe did the same when she impersonated Dark Mayhem.

His superpowers are laser eyes, force field creation, levitation, ergokinesis, and electrokinesis. Until the episode, "Thundermans: Secret Revealed", his powers are zapped into his own orb by Max, which was given to him in order to take his sister, Phoebe's powers. So, Dark Mayhem, completely rid of his evil powers and is imprisoned in Metroburg prison, sharing his cell with Strongdor, much to his dismay.

Dark Mayhem was the world most powerful villain with superpowers like laser eyes, force field creation, levitation, ergokinesis, and electrokinesis at a higher level than a normal superhero/villain. It stated his powers have electro-plasma energy which is strong enough to destroy Thundertanium. After Thundermans Secret Revealed, Dark Mayhem lost all of his powers by Max. His powers were then used by Phoebe but it slowly turned her evil and she started to experience weird dreams of her being Evil. Later in Thunder in Paradise, Max attempted to use the orb on Phoebe but she destroyed it and he had to use what was left of the orb to get Dark Mayhem's evil powers out of Phoebe. Afterwards the orb and the evil powers were permanently destroyed.

Dark Mayhem was said to be the most powerful and dangerous villain on the planet. He committed various of crimes and was very cruel to his own family. At one time he hung out with Mike Evilman and he turned the lateral into Hank Thunderman archenemy. Dark Mayhem also encounter Hank Thunderman and Dark Mayhem shot his old sidekick into space. During Season 1 and 2 he mentor Max to become a more competent villain after Max gave away the top secret location of the Villain League. He made his first appearance in Phoebe vs. Max: The Sequel when he asks Max to start keeping a record of his evil deeds in an evil chronicle for periodic reviews. Dark Mayhem doesn't like it when Max calls it a "journal" or a "diary" forcing him to settle for "evil chronicle." Max starts committing small crimes in Hiddenville and recording them for Dark Mayhem to review.

In Floral Support, Max's chronicle is confiscated by Principal Bradford just before Dark Mayhem's call to review the chronicle. Max manipulates Phoebe and Allison's Green Teenz Club to steal his chronicle back. During the chronicle review call, Dark Mayhem is impressed by Max for betraying Phoebe. However, Max feels guilty about hurting his sister and walks out on Dark Mayhem, making him mad. When Max returns, Dr. Colosso informs him that Dark Mayhem was actually impressed by Max walking out on him because it shows Max has a real villain potential.

In I'm Gonna Forget You, Sucka, During another chronicle review, Dark Mayhem demands that Max should change his appearance to look more villain-y. He doesn't like Max's "babyface" because it makes him look so innocent. Max upgrades the Nose-Hairilizer in order to use it to grow an evil beard but he accidentally zaps Nora with it. In the end, he confronts Dark Mayhem that he doesn't need to change his look to prove that he is villain material.

In Thundermans: Secret Revealed, Dark Mayhem send Lady Web to steal a large diamond to pay for a new Villain League Headquarters. When Phoebe foiled the heist Dark Mayhem  calls Max to the Villain League and introduces his new associates: Fairy Pinch-ess, Strongdor and Son of Scalestro. He shows Max the world's first power-sapping orb and gives it to Max, asking him to take ThunderGirl's powers. Max is reluctant about it but takes the orb anyway. Down in Max's Lair, Phoebe finds Max's chronicle open and reads it, realizing that Max left for a meeting with Dark Mayhem. She accidentally calls Dark Mayhem who reveals the plan for Max to take her powers. Dark Mayhem becomes impatient and wants to do the job himself. If only he knew where ThunderGirl lives. After watching a news coverage revealing that the Thundermans live in Hiddenville, Dark Mayhem asks his minions to go to Hiddenville and take ThunderGirl down. They fly to Hiddenville on Dark Mayhem's helicopter. On their way, Mayhem has a video call with Dr. Colosso during who is excited for Mayhem to take over Hiddenville. Dr. Colosso also informs him that Max took his parents power, which really impresses Dark Mayhem. Unfortunately, Mayhem accidentally tells his minions that Dr. Colosso will be the first one he'd dispose of - while the video chat is still on. This turns Dr. Colosso against Dark Mayhem.

Dark Mayhem arrives at Hiddenville and finds reporters and civilians outside the Thundermans house. He attacks them with his powers, causing them to leave. He then starts knocking down the Thundermans house to get inside. Dr. Colosso uses one of Max's dynamites to help the Thundermans escape. He reads a note on the kitchen counter revealing that ThunderGirl is at the prom at the museum. He follows them there and finds Max confronting Phoebe. He asks Max to take Phoebe's powers so that he can finally join them and become like one of them. But Phoebe gives a passionate talk to Max to help him see the truth, turning him against Dark Mayhem. Disappointed in Max's betrayal, Dark Mayhem warns that Max has made a huge mistake. He starts attacking both Thunder Twins. After fighting for a long time, Max gets the orb and tries to take Dark Mayhem's powers. Dark Mayhem gets the upper hand and blows away both Phoebe and Max. He then takes the orb, ready to take away the twins powers. Luckily, Chloe using her newly gained super strength, drops a heavy pillar on Dark Mayhem, rendering him useless. Max then uses the orb to take away Dark Mayhem's powers.

In Come What Mayhem, when Max realized that his stinkbomb would go off during the Super Awards, Phoebe suggests that they add his powers to one of them so that they can use his energy balls to destroy the bomb. Max strongly advises against this because Dark Mayhem's powers would also turn whoever has them evil as well. But Phoebe used the powers anyway, destroying the stinkbomb. However, when Phoebe tried to return them to the orb they couldn't go back into it and she was slowly turning evil.

In Thunder in Paradise, Phoebe started to experience weird dreams of her being Evil. So she goes to the Metroburg Superjail to ask Dark Mayhem for help with getting rid of his evil superpowers. She finds that he's sharing a jail cell with Strongdor. Dark Mayhem tells her that she can't. She needs to embrace them and complete his plan to take over the world. He gives her the details of where to find his former sidekick, Destructo to help her complete the evil plan. Phoebe tells Dark Mayhem that she will never be evil like him. She will be eviler. Destructo complains to Phoebe that she's treating him the same way Dark Mayhem was treating him. After Max used what was left of the Orb to drain Dark Mayhem powers from Phoebe, they were destroyed along with the orb. After the Thundermans save Phoebe and defeat Destructo, Hank kicks Destructo into the Dark Mayhem jail cell where he finds Dark Mayhem playing a board game with Strongdor. 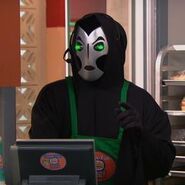 Dark Mayhem and his sidekick Destructo.
Add a photo to this gallery

Retrieved from "https://villains.fandom.com/wiki/Dark_Mayhem?oldid=4166847"
Community content is available under CC-BY-SA unless otherwise noted.