Deputy Captain of the Night Raider

Tricking people.
Be with Nagi.

Defeat Jun Himeya/Nexus.
Gaining greater power.
Regains his memory after his battle with Nexus.
Redeem himself.

Dark Mephisto (ダークメフィスト Dāku Mefisuto) is an evil Ultraman created by Dark Zagi a year before the events of Ultraman Nexus began. He bonded with deputy captain Shinya Mizorogi. He is the master of Dark Faust,

A year before the series started, he was Deputy Captain of the Night Raider and he was very close to Nagi, he and Nagi had the instinct to know the existence of Space Beasts even when the TLT equipment could not. After that, Mizorogi dreamed that he encountered a strange ruin,

One night, he and Nagi went to a building and they defeated the Beast Human. Their corpses were covered with beast cells. After they defeated the Human Beast, Mizorogi went alone and he was met by Dark Mephisto, Mephisto explained to Shinya that humans defeated Space Beasts while Space Beasts ate humans, therefore Mephisto finally merged with Mizorogi after he explained his social darwinist ideology.

Dark Mephisto is the mastermind of all events, he ordered Nosferu to kill Riko's family and he was the one who killed Riko by firing Cannon Blast in Riko's face. After Faust died, Mizorogi psychologically tortured Komon and in the end he challenged Himeya/Nexus to a fight. While in the middle of the battle, Mephisto summoned Nosferu to capture the little girl as a hostage in order to psychologically torture Komon again. Mizorogi again summoned Himeya to challenge him when Nosferu returned, after which the two of them fought in Mephisto's Dark Field, both of them were badly injured and they surrendered. Mizorogi hasn't given up and makes another plan to make Komon side with Mizorogi by creating a vision of his dead girlfriend, but Mizorogi's plan is thwarted by Himeya. Mizorogi still hasn't given up, when he is surrounded by Komon, Nagi, Jun and other Night Raider, Mizorogi makes Dark Field in human form and summoned Galberos, while Nexus is fighting Galberos, Mizorogi taunts Ultraman and he is shot by Nagi from behind but not dead.

After his repeated defeats, Mizorogi intends to open the Gates of Darkness to kill Ultraman and all of the Night Raiders. He summoned Kutuura to defeat Ultraman. After Ultraman died in the Land of Death, the Night Raider arrived and defeated Kuutura. Mephisto transforms into Mephisto and challenges Night Raider to fight him. In the middle of his battle with Night Raider, Ultraman awakens but is still weak. Illustrator then tells Night Raider to fire the Ultimate Vanisher into Nexus' Energy Core. Nexus awakens and starts fighting once again. After a fierce battle between the two giants, they collided with the strength of their beams. Mephisto then disappeared.

Mizorogi was still alive and survived his fight with Himeya but he lost his memory. During the Banpira incident, Mizorogi was arrested by TLT. While he was detained, Director Matsunaga revealed to Mizorogi that he had hurt people and committed heinous acts. Then, Unknown Hand returned his memory and Mizorogi managed to escape. when Misawa revealed himself, he shots Mizorogi in the back and nearly killed him. Mizorogi was able to transform into Dark Mephisto again because Mephisto power was still in him while Mephisto's original personality had already disappeared from him.

While Nexus power is being absorbed when he fought Dark Mephisto Zwei, Mizorogi helps Nexus and fights Misawa/Zwei. Mizorogi sacrifices himself so that Zwei can be defeated. Nexus fires his Arrow-Ray Schtrom at Zwei. After a brutal fight, Mephisto reverted to his human form and died at the hands of Nagi, before died he informed her that Unknown Hand was in the Night Raider and he is just a puppet that Unknown Hand used.

When Nexus, Max, Cosmos, Zero, and Ginga Victory arrive at Eteldummy's first floor, Dark Mephisto is created to stop them. He fights Nexus while the other Ultramen go in search of Etelgar. Dark Mephisto was defeated by Nexus' Over-Ray Schtrom. 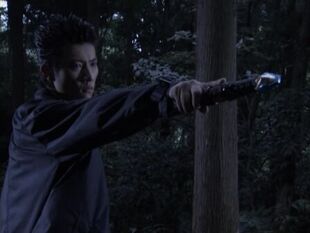 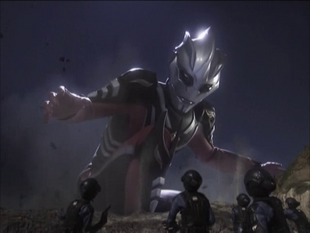