Kill and replace Mizorogi Shinya as the second Dark Mephisto.

Dark Mephisto (Zwei) (ダークメフィスト（ツヴァイ） Dāku Mefisuto (Tsuvai)) is an evil Ultraman created by Unknown Hand after the fall of the first Dark Mephisto. He was created with the same appearance as the first Mephisto but with even more power. Unknown Hand corrupts TLT Memory Police officer Hiroyuki Misawa as his pawn.

Misawa later appears when he shoots Mizorogi from behind and after he shoots Mizorogi he tells Nagi, Komon, and Mizuo that he will paint the world into darkness, Misawa eventually turns into Dark Mephisto (Zwei). After he transformed, he seemed to have the same appearance as the first Mephisto, he was in his giant form trying to kill the three of them.

Luckily, Ultraman Nexus came to defeat the black giant, Zwei finally turned his eyes red and challenged Nexus. But when Zwei takes out his Mephisto Claw, Nexus is easily overpowered by him, because Zwei is hard to beat, Nexus turns into Junis Blue and flies into the sky. Mephisto followed Nexus flying and eventually Nexus was still overpowered.

Zwei ends up absorbing Nexus' energy because he knows that the life of Nexus human host is very short. Mizorogi turned into Dark Mephisto of his own will and Mizorogi was ready to take on Zwei. When they were fighting, Mizorogi overpowered Zwei at first but in the end Zwei was able to overpowered Mizorogi and stabbed his stomach. Zwei laughs seeing Mizorogi suffer and torment, Mizorogi tells Nexus that saving people is his duty because light has come to him. Nexus uses Over-ray Schtrom to kill Zwei and the attack is successful and Zwei turns into blue particles.

After Zwei died, the dying Mizorogi told Nagi that he and Misawa were puppets manipulated by the Unknown Hand. At the end of the scene, an unknown person has deleted the data of the person who has the potential to become a Deunamist. 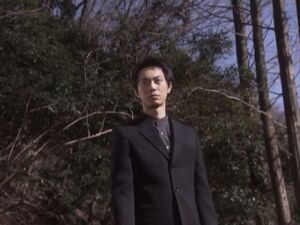 Hiroyuki Misawa
Add a photo to this gallery

Retrieved from "https://villains.fandom.com/wiki/Dark_Mephisto_(Zwei)?oldid=4226636"
Community content is available under CC-BY-SA unless otherwise noted.