He is an evil mirror version of Meta Knight, except he is a much more vicious, violent and brutal fighter, displaying and showing no mercy nor honor for his opponents. Throughout the games, Dark Meta Knight has mainly served as a villain against Kirby and his allies but he has recently become an ally of Kirby's himself, starting in Kirby: Star Allies as a playable Dream Friend.

The third and final time he is fought is within the Dimension Mirror, where he attempts to disguise himself as Meta Knight to fool Kirby, but the real Meta Knight reveals the impostor. Dark Meta Knight then assumes his true colors and fights Kirby. When he is finally defeated, his body shatters and a portal opens up leading to the final boss, Dark Mind.

Although Dark Meta Knight does not appear in person until Dededetour has been unlocked, it is strongly implied that he is the main antagonist of the entire game (instead of Queen Sectonia), or at least the greater-scope antagonist, as he was in control of the Dimension Mirror the entire time, which was responsible for corrupting Sectonia and turning her evil.

Sectonia was once a just and kind ruler of Floralia and a close friend of her right-hand man Taranza, who eventually came across a mirror which he then presented to her. She soon became obsessed with both the Mirror itself and her own beauty and vanity. Little did she know that Dark Meta Knight was the new master of the Dimension Mirror and was casting a negative influence on her. She eventually used her newfound dark magic (presumably obtained through Dark Meta Knight's manipulation) to transform herself into a giant bee, seeing her new form as true beauty. The more evil Dark Meta Knight fed her through the mirror, the worse she became towards Taranza and her citizens. She eventually tried to rule over Floralia's inhabitants as their goddess and began imprisoning them to serve her.

He also appears as the penultimate foe and boss in The True Arena. Upon Kirby destroying him a second time, he violently shatters like glass, leaving Kirby to destroy Sectonia Soul (who is still under Dark Meta Knight's evil power and influence, although his physical body is destroyed) however, as Dark Meta Knight had been destroyed before in the same way by Kirby, it is likely that he will make a return.

Dark Meta Knight makes his most recent reappearance in Kirby Star Allies, but not as an antagonist. Instead, he appears as one of the three Dream Friends of Wave 2 along with Daroach and Adeleine/Ribbon. Contrary to belief, he is vastly different from his counterpart, both in terms of gameplay and visuals.

He has received an updated look in which his eyes appear to glow orange and his mask has scratched markings around it. His wings have also been given a torn look, in order to fit with his torn cape and the M logo appears on his right shoulder. Interestingly enough, the sword he wields retains its original design from Kirby & the Amazing Mirror, instead of being a recolor of Galaxia.

According to the official flavor text given to him, Dark Meta Knight is only allying himself with Kirby simply because he is invested in the Jamba Hearts and most likely wishes to claim their powers as his own. 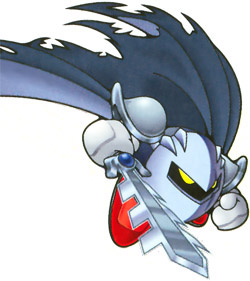 Artwork of Dark Meta Knight in Kirby & the Amazing Mirror. 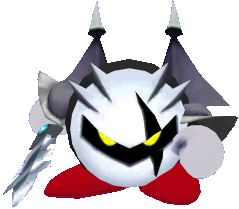 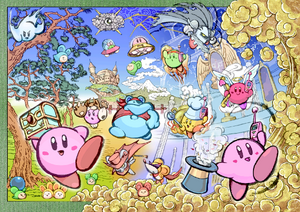 Dark Meta Knight in the top-right of unlockable artwork for Kirby Star Allies. 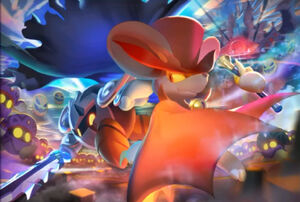 Dark Meta Knight with Daroach in Kirby Star Allies as one of the unlockable artwork.