The Dark Mother is an ancient evil being and a fictional villainess that appears in the comic series W.I.T.C.H. She is the primary villain of the Seventh Arc, New Power.

Dark Mother is the most powerful and dangerous foe, worse than Prince Phobos, Nerissa and other villains in the W.I.T.C.H. universe put together.

The origins of Dark Mother came from the legend of Meter, which Yan Lin retold to the Oracle. Meter was originally the Queen of Spring, who made the woods grow where she walked. She also controlled the flower cycles and the nature. But her heart filled with arrogance and she used her magic to transform into a monster. Then she attacked Kandrakar, but she was defeated by the other Queens of Elements, and she was sentenced into the nothingness, far from all the worlds. But one of Meter's seeds found a place to take a root, and that place was Earth.

Now, Dark Mother's lair is beneath Heatherfield. She looks like a plant, and with her roots she can get anywhere she wants. Dark mother has extreme powers and control over Earth. She has many pawns at her disposal which includes dangerous creatures and loyal servants like Romur. She was defeated by the W.I.T.C.H girls and was sealed in a stone tomb. Her dark roots that inhabited Kandrakar threatened the mystical fortress but with the combined powers of the girls they succeeded in protecting the foundations of Kandrakar. Despite her vast power over the earth, she is still trapped in her own prison of vines and roots, sealed by Kandrakar. It was later broken unintentionally by Will, when she discovered the root to her powers. Dark Mother later sent a black seed to Kandrakar, infiltrating its protective barrier, and slowly, it took over the minds of the Elders. After she escapes from her earthly prison, Dark Mother infiltrated Kandrakar, turning it into her desired kingdom, with the Oracle and the Elders under her control, save for Yan Lin. The W.I.T.C.H. were near the edge of defeat against her, but in the end, the girls managed to defeat her by sealing her in a stone tomb. Although Dark Mother was sealed away, her roots still threatens the foundation of Kandrakar, which the W.I.T.C.H. girls later saved.

When Meter was good, she was extremely beautiful with the appearance of an innocent maiden. She was slim and willowy with pale skin and soft, gentle features which were framed by a waterfall of long flowing white hair. Blossoms and leafs grew around her head like a wreath or crown and she dressed in a sleeveless gown which was blue but fades to violet as it reaches the knees. Flowing, watery or fiery shapes adorn the sides of the dress where the colours fade into each other.

After her vanity, pride and lust for power grew, she remained stunningly beautiful but it became a different kind of beauty. She retained her willowy form but her hair became brown like the bark of a tree. The greatest change was her face which had become more mature yet still beautiful with slanted, yellow eyes and a smile which shows her cocky and vain heart. After her corruption, she wears revealing purple and violet dresses.

Dark Mother could also take the form of a monstrous tree with huge branches and long roots which emits a red aura. Her face and upper body are visible on the trunk but she is now a frightening and hideous creature.

Dark Mother is probably one of, if not the most powerful foe the guardians have ever faced with more energy than a thousand suns. She is an immortal being who can live forever in a youthful state and she cannot be killed as easily as a human. She can also shift from a humanoid form to a monstrous plant shape.

As the Elemental Queen of earth, Meter has powers over the earth element that surpass Cornelia's. Her elemental powers are described as infinite. She can manipulate the cycles of flora and trees grow wherever she walks. She can generate magical seeds and can cause earthquakes. In both humanoid and tree forms, she can generate vines and roots and command them to do her bidding. Over time, her roots can grow long enough to travel beneath every surface of the Earth. Her vines can reach anyone anywhere and even conduct huge amounts of electricity from lightning, enough to recharge a city the size of Heatherfield. She also has power over the creatures of the earth like spiders and insects and commands legions of monsters undiscovered by humans. Dark Mother had vast magical knowledge and the power to wield it. She could weave spells into her plants such as the tree in Kandrakar that enchanted nearly everyone, put their roots into their minds and filled them with shadows and the plant which turns everything into a scent.

Meter also possess psychic powers. She could sense the guardians' presence and could tell which ones had found their root of power and which ones hadn't and tell when someone broke through the Earth's surface as well as predict natural disasters. She could even sense them before they became guardians and knew they would become a threat. She tried to kill Taranee when she was just a baby but was foiled by the power of fire and a meteorite. 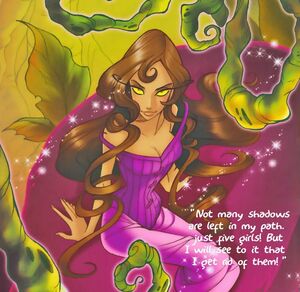 Dark Mother
Add a photo to this gallery
Retrieved from "https://villains.fandom.com/wiki/Dark_Mother?oldid=3741534"
Community content is available under CC-BY-SA unless otherwise noted.