All of the powers of Naruto

Feeding off of the darkness and hatred inside Naruto's heart.

Fragmental Dark Form
Dark Naruto is the manifestation of the dark side of Naruto Uzumaki, having been created from all the hatred that festered while the boy was ostracized and despised by the Hidden Leaf when Naruto was a child, purely due to the fact that Naruto harbored Kurama in his body which led to many villagers resenting or even hating him.

Like the original Naruto, Dark Naruto is voiced by Maile Flanagan in English and Junko Takeuchi in Japanese.

Unlike his counterpart, Dark Naruto is cold, vengeful, and arrogant. He has a deep hatred for the people of the Leaf Village who treated him badly for no apparent reason, just for simply being the Jinchūriki of Kurama. However, he does not blame Kurama for his pain, and despite his negative traits, Dark Naruto has a sense of honor; desiring only to get revenge on the people of the Leaf Village who treated him badly, sparing the people who are innocent. As a Jinchūriki, the only thing Dark Naruto cares about is his own kind; other Jinchūrikis or people who are similar to Jinchūrikis; being outcasts, he dislikes people in general who don't care about their comrades/allies or are only using them for their own ends.

While training at the Falls of Truth to confront Kurama, Naruto is confronted by Dark Naruto as he explains he is while belittles Naruto on how quickly the people who used to hate him changed their standing after Naruto saved them from Pain. From there, Naruto finds himself in a fight neither he nor his other self could win no matter how hard the either tried.

However, with Killer Bee's help, Naruto confronts his dark self once more and explains that while the Hidden villagers did hate him, he still trusted them as they were important to him and gave him the confidence to live up to their eventual trust. This in turn weakens Dark Naruto as Naruto embraces him and thanked him for helping him become who is now. This causes Dark Naruto, accepting Naruto's ideals, to let go of his anger and fade away. 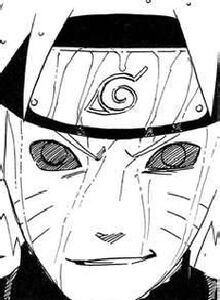 Dark Naruto in the manga.