Dark Ones (The Evil Dead)

Army of Darkness vs. Re-Animator

Escape from the Deadlands/Mirror Dimension (succeeded).

Kill Ruby Knowby and Kaya for betraying them (succeeded).
Reclaim the Necronomicon and human world as theirs once more (succeeded).
Kill the Prophesied One (ongoing).

The Dark Ones, known by many alias, are ancient evil entities who serve as the overarching antagonists of the Evil Dead franchise. They initially made appearance in comic book adaptations of the franchise before finally making a canonical appearance in TV Series.

In Ash vs Evil Dead, the Dark Ones' characteristics further elaborated on. They are stated to be “neither demon nor fully human”, while as they appeared to be humanoid entities dressed in dark hooded cloaks that completely conceal their appearance. One of them, "Ruby Knowby", creator of the very Necronomicon which plagues Ash the day he stumbled upon the accursed book, can also shapeshift into a human form as alternate method.

Army of Darkness vs. Re-Animator

The Dark Ones' debuts. While locked up in Arkham Asylum, Ash Williams encounters The Dark Ones when they are summoned by Herbert West and Dr. Whateley who is a mentor of West. As the eldritch deities begin to emerge from an open portal, Ash manages to destroy The Necronomicon that had opened the portal and had it closed before any of the Dark Ones could escape, causing Arkham Asylum to collapse on itself.

Evil Dead 2: Cradle of the Damned

Dark Ones are mentioned. When Annie Knowby and Simulacrum Ash (a copy of Ash created from Ash's severed hand mixed with Annie's spellcasting using her own blood. But unlike the Canonical counterpart from Ash vs. Evil Dead which was also made from Ash's severed hand minus Annie's blood, this version of Ash copy is a heroic man) are sucked into the Mirror Dimension (aka Deadlands), they encounter a man named Regardie, who has been trapped the said dimension since the turn of the 20th century. When Regardie first arrived, his soul was taken by a Dark One, trapping him in the dimension for all eternity.

Only one of the Dark Ones, Cthulhu, makes its appearance as the comic's main antagonist. It appears through a sinkhole that connects between human world and mirror dimension, sucking souls of all around the area. Annie Knowby and Simulacrum Ash unleashes souls of some of the most powerful voodoo sorcerers of the last century to aid them in the battle against Cthulhu.

The souls came together to form Damballa, the creator of life. Cthulhu was ultimately defeated by Damballa. Thinking that the battle is won, Annie and Simulacrum Ash looks for a place to feed themselves only for Cthulhu's hand appear out of nowhere and crushes Annie and Ash. It is revealed that they never left Mirror Dimension / Deadlands and are still trapped within the eldritch dimension. The experience Annie and Simulacrum Ash went through was a test to see if souls on Earth was worth taking.

Eons ago, Dark Ones, with their supernatural god-like powers, wreaked incredible havoc upon human realm and humanity found itself at their mercy. There seemed to be no way of stopping their madness, until one of them named Ruby Knowby, back then known as Mulier Daemonium de Igne (Demonic Woman of Fire in Latin), with the help of her partner in crime Kaya the Necromancer betrayed the rest of Dark Ones and cast them off to an alternate dimension known as Deadlands (Mirror Dimension in comics). Ruby committed the act of treachery for wanting to have unlimited power over all evil for herself and for Kaya.

For the next thousands of years, the Dark Ones remained trapped in Deadlands until various events of season 3 caused "The Rift", a phenomenon in which magical seal responsible for keeping the Dark Ones imprisoned in Deadlands, started to become weaker and the portal that would enable Dark Ones to cross over into human world had been established (but not yet in its full power).

It is foretold by the Necronomicon that the Dark Ones will be ultimately unleashed from their dimensional prison, walk upon the human realm once again and the Prophesied One will rise up to stop them. Ruby, tipped off by Kaya from Necronomicon, who after aiding Ruby sealing away Dark Ones, ended up losing her body by the destructive power of Necronomicon and having her soul trapped within the accursed book.

Realizing that the prophecy foretold is in motion and that the Dark Ones, once freed would be coming after her, Ruby hatches a plot to anticipate the Dark Ones' coming in her own way: to have the powers of the Prophesied One transferred to her own demonic offspring (a being born from Ruby made in the image of Prophesied One) and to herself. This way, she believes that not even the Dark Ones would be able to touch her. As Ruby advances her devious plot, the seal increasingly weakens and the Rift becomes wider as episodes progress.

However, Ruby's grand scheme is foiled when her demonic Prophesied-One-to-be is killed by the real Prophesied One, leaving Ruby with little option with so little time against impending arrival of her former brethrens.

As predicted, Dark Ones make their full canonical appearance in Judgement Day. After being instructed by Ash to keep the Rift shut, which is located in Ash's hardware store cellar, Pablo the Shaman goes to the store only to find the rift already torn open. The young shaman attempts to close the rift to no avail. As Pablo looks into the Necromicon's lost pages to check if he is missing something, Dark Ones come through the Rift, much to Pablo's horror. Immediately after arriving, Dark Ones reclaim part of Necronomicon's passages which were engraved onto Pablo's body along with the rest of lost pages of the book. They then leave the cellar to find Ruby and Kaya, leaving Pablo to wonder why he was spared. Dark Ones' arrival has unleashed evil entities which proceed to rampage throughout Elk Grove, turning its residents into Deadites and deadites terrorizing any non-possessed people.

Meanwhile in the hideout, Dark Ones' presence is also sensed by Ruby and Kaya, who were busy creating a new page for Necronomicon using Zoe (sole surviving agent from Knights of Sumeria)'s flesh and blood in order to hide their presence from the oncoming Dark Ones, albeit only temporary (Kaya complains to Ruby that they are merely delaying the inevitable) until Ruby comes up with a way to destroy Dark Ones. Their bloody work is interrupted by the arrival of Ash Williams, who intends to kill Ruby and reclaim Kelly (Ash is unaware that opened Rift cannot be closed). Although Ash is no match for Ruby's supernatural powers and ends up having his beloved chain-saw crumpled, his presence delayed what Ruby and Kaya were doing and bought enough time for Dark Ones to locate the pair of traitresses. Before Kaya and Ruby can do something very bad to the defeated Ash, Dark Ones home in on the two women. They waste in no time ripping Kaya's soul out of Kelly's body, spitting Kaya's original body out and forcing her soul back in there. Then Dark Ones incinerate Kaya's body and soul with inferno as Ruby helplessly watches her partner in crime being roasted. Knowing her doom at the hands of her former pantheon impending, Ruby curses at her former pantheon in a final act of spite, shouting that they too, will be defeated by the Prophesied One (aka Ash Williams) before her soul was claimed by Dark Ones and her body was reduced to a de-calcified skeleton that broke into chunks upon being tossed, with Dark ones finally getting their millenia-old vengeance.

Then Dark Ones realize that Necronomicon is missing: Ash, taking advantage of the 'reunion' between Dark Ones and Ruby, has fled with Kandarian Dagger, Necronomicon and now soulless husk of Kelly. On his way back, Ash sees a car that contains Brandy and Pablo who were out on the chaotic street of Elk Grove attempting to inform Ash about the Rift, ends up running head-on towards Ash. Attempting to avoid hitting a car that has his daughter and buddy, Ash loses the control of his car and crashes onto a restaurant. Dark Ones quickly catch onto Ash, tossing him out of their way and reclaim the Necronomicon, reattaching and completing the accursed book, good as new. Pablo attempts to stop them but is instead effortlessly incapacitated. Once again inexplicably sparing Pablo, Dark Ones complete their summoning spell before disappearing, and with their spell emerges a 60+ft. Kandarian Demon titan from the underground.

In "The Mettle of Man", the Dark Ones do not make actual appearance but consequences of their release are being shown: the Kandarian Demon, upon being summoned by the Dark Ones, proceeds to smash everything in sight, possessing Elk Grove residents left and right along the way. The deadite outbreak, it turns out, occurs not just in Elk Grove: breaking news reveal that Dark Ones and their evil forces are wreaking havoc all around continents, waging a global war against humanity. Pablo deduces that Dark Ones summoned Kandarian Demon as a challenging the Prophesied One, who represents all humanity, to a duel.

But seeing a titanic demon out for his head and people either turning evil and falling dead left and right, in addition to having enough of evil, in spite of Ash's effort to stop them, just keeps on coming (this time on a global scale), Ash is completely demoralized and undergoes shell-shock. After lots of cheer-ups and straightforward honesty from Brandy, Ash regains his morale and is snapped back into battle.

After bringing back Kelly to life, engaging in lots of fights against army of deadites, running through the streets of Elk Grove in the midst of national guards and deadites killing each other, Ash and his gang made to the safety managed by the guardsmen. As the world of humanity is falling apart Ash musters all remaining courage to take on the challenge imposed upon him by Dark Ones. Military force announces their intention to release a nuke to destroy Kandarian Demon along with Elk Grove (not knowing that man-made weaponry is worthless against the demon). Pablo, Kelly and Brandy evacuate with the military, but Ash decides to stay behind and vanquish the Kandarian demon against wishes of Pablo, Kelly and Brandy. He commandeers a tank and attaches the Kandarian dagger onto a tank round, and attracts the demon's attention long enough to be able to fire the round through it, killing it for good but Ash too, is seriously wounded.

In the aftermath, a badly wounded Ash is recovered by the Knights of Sumeria agents moments before nuke is dropped onto Elk Grove. He wakes up in a post-apocalyptic future, with a new augmented hand. Ash is then told by KOS agent that Dark Ones is on the move, apparently on the verge of winning their war against humanity but are still looking for Ashley Williams aka The Prophesied One, for they know their victory against humanity is not complete until they kill Prophesied One.

The Dark Ones are mentioned by Ash as a cult called "The Guild" in the Middle East who claimed them to be the supposed writers of the Necronomicon Ex-Mortis in the videogame Evil Dead: A Fistful of Boomstick. 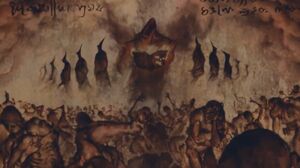 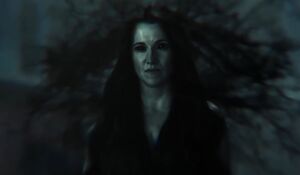 Ruby in her Dark One form. 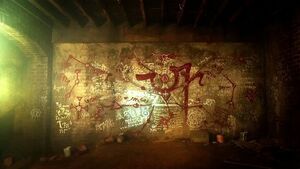 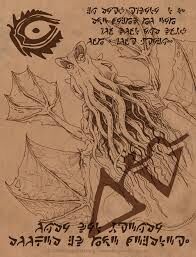 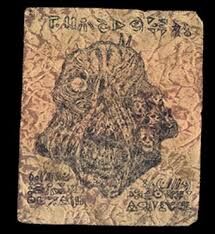 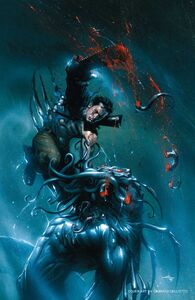 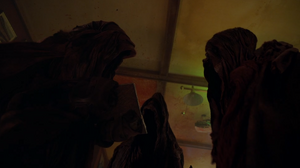