Harnessing the powers of darkness.
Possessing living organisms as their hosts.
Wreaking havoc and terror.

The Dark Overlords of the Universe themselves are giant, mawed, scorpion-like creatures as shown in the movie.

In the Howard the Duck comics, they appeared as shadowy and monstrous humanoids as they are seen being trapped in the Nexus of Sominus, a strange netherworld that is a region of demons exists between the planets which they rule with an iron fist.

The Dark Overlords of the Universe are an ancient and powerful alien race of immortal, demonic tyrants. The reason why they called themselves the "Dark Overlords of the Universe" is because they were once feared and even worshiped, and their power was unmatched and unopposed throughout the cosmos. They were later challenged and defeated by unknown adversaries in the First Cosmic War. They are now the rulers of an alternate dimension called the Nexus of Sominus, a region of demons that exists between the planets, the Dark Overlords seek revenge and wait for the occasion of their dominion to come back.

When Dr. Walter Jenning, an astrophysicist, tries to send Howard T. Duck back on his home planet, something goes wrong and one of the Dark Overlords escaped and was brought to Earth, where he takes possession of Jenning's body. He reveals himself in a diner, just a moment before destroying it and kidnapping Howard's human friend Beverly Switzler for having her as a host for another member of his kind. After taking possession of a truck, the Dark Overlord comes back to the lab, but Howard, with the aid of Phil Blumburtt, hits him with an experimental neutron disintegrator. The Dark Overlord seems to be destroyed, but in reality, he has just been expelled from Jenning's body, thus gaining his original form. After a hard battle, Howard manages to hit him again with the disintegrator, killing him, and then he destroys the laser spectroscope, preventing other Dark Overlords from coming to Earth (and prevents Howard from ever going back to his homeworld).

Each Dark Overlord of the Universe is a powerful being, who disposes of many powers: while in a host, the Dark Overlords possess pyrokinesis and telekinesis; in their original form, they are gargantuan monsters with incredible strength, speed, and stamina, able to project plasma beams from their tails, with many prehensile tentacles and sharp teeth and claws.

The Dark Overlords only exist for destruction and domination, eager to once again establish their dominion over the whole universe. 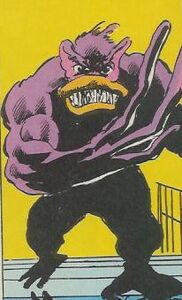 Another monstrous and duck-like form of the Dark Overlords in the Howard the Duck comics. 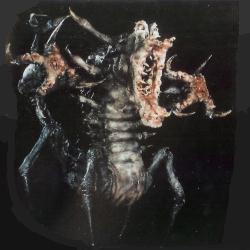 One of the Dark Overlords in their true, monsterous and insectoid form.

One of the Dark Overlords. 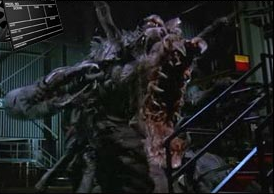 The destruction of a Dark Overlord.
Add a photo to this gallery

Retrieved from "https://villains.fandom.com/wiki/Dark_Overlords_of_the_Universe?oldid=3491786"
Community content is available under CC-BY-SA unless otherwise noted.