Cause mass destruction upon the universe and kill the X-Men

Uncontrolled Power, Evil from the Past

Dark Phoenix is the name given to Jean Grey after she became corrupted by the Hellfire Club and turned into a vastly powerful supervillain who proceeded to cause chaos across the universe until being defeated in a battle than supposedly claimed her life (of course Jean Grey was later revealed alive) - although modern retelling attribute much of the events to the corruption of the Phoenix-Force in the original comic book (and X-Men 3) the Dark-Phoenix was simply Jean Grey gone bad rather than a separate/merged entity.

The Phoenix, in the form of Jean, appeared as the primary antagonist of X-Men: The Last Stand and a prominent plot point in the final episodes of Wolverine and the X-Men. Dark Phoenix was also used in the 1990's X-Men cartoon's third season. She was portrayed by actress Famke Jansen in X-Men: The Last Stand.

Dark Phoenix is the secondary, later true main antagonist in X-Men: The Last Stand - this time caused by Jean apparently going insane. In the film, Professor Xavier recognizably remembered this alternate personality of Jean Grey by its other name "The Phoenix", whom he sees as in his own words, "a creature all desire, joy and rage".

Dark Phoenix also appeared in the animated series X-Men, in its third season as the true main antagonist. In this series, the ending of the Phoenix story arc shows Jean Grey, as Phoenix (still as a fiery creature), taking the super-powerful M'Kraan Crystal into the core of the Earth's yellow sun. Oddly, both survived this and were eventually brought to Muir Island, where Phoenix was developing a darker side that Xavier was understandably scared of. Phoenix would refuse to abandon Jean's body, which leads to her getting captured by the Inner Circle (Hellfire Club) and mind-controlled. Dark Phoenix emerged and broke free of the Inner Circle's control, going into space to destroy a star that was monitored by Shi'Ar explorers. Shi'Ar queen Lilandra goes to Earth and demands that the Dark Phoenix be executed due to it being able to destroy "all that is", just like the M'Kraan Crystal that spawned it. The X-Men have to battle the Shi'Ar's gladiators to save Jean, but when her powers become dangerous, she uses a Shi'Ar space cannon to kill herself. Phoenix emerges and, with the X-Men's life-force, resurrects Jean and leaves.

The Phoenix is featured as the hidden tertiary antagonist in the TV series Wolverine and the X-Men. In this series, the Phoenix is a creature that has been around on Earth since homo superior first appeared. It would enter the host mutant at birth, grow within it and then reach maturity, at which point it would cause mass destruction and risk total destruction of Earth. At the start of the series, a mysterious explosion occurred at the X-Mansion that presumably killed Jean Grey and Professor X.

A year later, Magneto finds a comatose Professor X on the shores of his kingdom of Genosha. The Professor is brought back to the X-Mansion, where the Professor reveals that the coma he is in will last for 20 years and he has woken up to see a world ravaged by fire and the robotic Sentinels are making mutants an endangered species. The cause of both the explosion and the fires on Earth were revealed towards the end of the series, when Emma Frost and Cyclops look at the X-Mansion before it is destroyed; both were caused by stress from Jean Grey, the unfortunate host of the Phoenix, who would unintentionally unleash her powers.

In "Shades of Grey", Jean Grey (who has recently woken up from a coma in a hospital) is ratted out to the Mutant Response Division, who comes to capture her. The Phoenix suddenly manifests and unleashes a psychic wave that causes a portion of the East Coast to lose consciousness. Cyclops and Emma save Jean from Mister Sinister, who uses her Phoenix powers to defeat him. Emma brings Jean before the Inner Circle and tells Jean of the Phoenix, what it can do and how they can stop it; by getting the Stepford Cuckoos to absorb the Phoenix. However, when Emma discovers what the Inner Circle plans to do with the Phoenix, she absorbs the fiery creature into her body, turns into diamond and explodes, releasing the Phoenix into the atmosphere and killing both of them.

In the first game, Dark Phoenix appears at the end of the game. If the player decided to save Nightcrawler instead of Jean Grey in Mephisto's realm, Dark Phoenix will come to Earth and take revenge on the people who refused to save her.

In Marvel: Ultimate Alliance 2, Jean Grey is playable with the Phoenix and Dark Phoenix outfits being available to her.

Dark Phoenix appears as a playable character in Marvel vs. Capcom 3: Fate of Two Worlds. If Phoenix's life gets empty and her Hyper Combo Bar is full, she will turn into Dark Phoenix.

Initially, Jean's powers were simply restricted to telekinesis, and even lifting her own weight quickly tired her. With training her telekinesis improved, but it wasn't until after she was released from the stasis chamber she was placed in by the Phoenix Force that her telekinesis really started to become powerful.

Jean's telepathy was suppressed at a young age by Charles Xavier after she connected with her dying friend, Annie Richardson. Later, Xavier released these mental blocks for a more mature Jean.[1]Template:R She lost telepathy following her release from the Phoenix egg, only to regain it after battling Psynapse with X-Factor.

While accessing the Phoenix Force, Jean's empathy, telepathy and telekinesis are greatly magnified and heightened to an incredible degree. The Phoenix Force also allows her to travel unaided through the vacuum of space, cross interstellar distances faster than the speed of light, and to manifest flames while using her powers, often in the shape of a fiery raptor.

As the Phoenix Force Avatar

As the favored and true avatar of the powerful Phoenix Force, Jean may greatly increase her powers by tapping into the life energies of those yet unborn. Excalibur #25
{{{2}}}
Template:R The Phoenix Force also allows its avatars to manifest additional powers, especially in terms of Jean as its "host, house, and self". Jean Grey is the strongest and complete host of Phoenix Force and as such, she is even capable of forcibly ripping it out of another host and forcing its status upon herself [3]. They became the White Phoenix Of The Crown.

| Abilities = Phoenix excels at astral combat. She maintained a psychic link to Cyclops for a number of years. She possessed the memories of the Phoenix duplicate of her as well as those of Madelyne Pryor-Summers, her clone, and is thus an expert pilot. Jean has shown some proficiency in hand-to-hand, non-psionic combat; the extent of this is unknown as she prefers to utilize her telekinesis and telepathy during battle. She has a college education from Metro College.

| Strength = Jean possesses the normal human strength of a woman of her age, height and build who engages in moderate regular exercise. However, some incarnations of Phoenix, including at least the first appearance of Dark Phoenix at the Hellfire Club, possessed superstrength sufficient to lift over 100 tons physically.

Jean demonstrated the upper-limit of her kinetic strength by grasping multiple components (the strewn rubble of a Genoshan school), which, according to Hank McCoy, weighed anywhere up to 50 tons.Template:R From this display it can be theorized that Jean's maximum telekinetic load without the use of the phoenix force is 50 tons, though she could lift Avalon. And could stop a plane in mid air and lift it, while feeling Cable's pain with her telepathy. 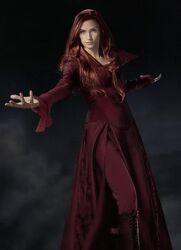 Phoenix as she appears in X2 X-men United 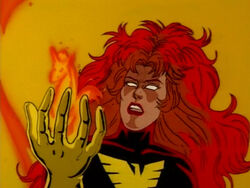 Dark Phoenix in the animated series

Cite error: <ref> tags exist, but no <references/> tag was found
Retrieved from "https://villains.fandom.com/wiki/Dark_Phoenix?oldid=1464156"
Community content is available under CC-BY-SA unless otherwise noted.