Officer of the Forces of Nature

All powers and weapons of Pit

Defeat Pit and prove that he is the superior version.

Help Pit defeat the Chaos Kin and save Palutena.
Defeat Hades and the Underworld Army alongside Pit (both succeeded).

Dark Pit, or Black Pit (due to his colour), also nicknamed "Pittoo" by Pit and Palutena and "Ptooey" by Hades, is the flawed, incomplete clone of the hero Pit and the secondary antagonist in Kid Icarus: Uprising.

He serves as a rival to Pit and dons a portrayal of an anti-heroic personality. He makes his first appearance in Chapter 5 and is first encountered for battle in Chapter 6. Dark Pit has various nicknames but no matter which version it is, he hates being referred to by them.

He was voiced by Minami Takayama in the Japanese version, and Antony Del Rio in the English version.

Dark Pit was a copy of Pit created when Pit himself shattered the Mirror of Truth. He turned against Pandora and absorbed her powers to gain infinite flying capabilities. Dark Pit appeared a few times either as an ally or an adversary. His alliance was confirmed indefinitely when Pit sacrificed himself to save him from the ashes of the Chaos Kin. Dark Pit returned the favor by bringing him to the rewind spring. But Pandora brought her energy out of him and was able to reclaim her old body. Dark Pit soon defeated her and brought Pit back to life. His last appearance in the game was when he was seen flying with Pit after defeating Hades.

Dark Pit appears as one of the playable characters in the 2014 video games Super Smash Bros. for 3DS/Super Smash Bros. for Wii U. Dark Pit is a clone of Pit but is more of a close-range fighter. He is an unlockable character in both versions. His Final Smash is the Dark Pit Staff. It performs in a similar fashion to Zelda and Sheik's Light Arrow. Dark Pit also stated that after the events of Kid Icarus: Uprising he allied himself with Viridi and the Forces of Nature. He is tied with Pit as they are both ranked 32-33.

However, Dark Pit's differences are marginal compared to some other Echo Fighters (such as Lucina, Chrom, and Ken), so choosing him over Pit is almost entirely up to personal preference.

In terms of appearance, Dark Pit is nearly identical to that of Pit, with the most obvious differences being his black clothing, hair, low voice, and shadowy teal wings. The darker color scheme is also similar to that of the "fallen angel" palette swap from Super Smash Bros. Brawl with some minor changes, such as red eyes, and some golden décor as well as a golden laurel crown.

As Dark Pit is the physical manifestation of Pit's dark side. He is said to represent the repressed feelings that Pit keeps to himself. Dark Pit is significantly more serious than his jovial counterpart, often having a more dry sense of humor. Dark Pit is more arrogant and cocky, claiming to be the original Pit. Dark Pit is also more aggressive and pragmatic than Pit, often striking opponents when their guard is down. Dark Pit proves to be sharper than Pit, possessing more common sense. This is shown when he deduces that it would take more than one soul to create an Underworld monster.

Dark Pit's most notable trait is his independent streak. As the Mirror of Truth was destroyed before the process could be complete, Dark Pit becomes a neutral character, refusing to side with any of the gods. This is shown when he defies Pandora, and flat out refuses Medusa's offer for an alliance. In Chapter 22: Scorched Feathers, he even openly calls out the gods for their selfishness, claiming that they are no better than humans as their wars throw the world off balance.

During the Chaos Kin arc, Dark Pit's personality begins to progressively change. Once he realizes that if Pit dies, he would die as well, he becomes Pit's closest ally, fighting side by side to aid him in rescuing Palutena's soul. And when Pit sacrifices himself and his wings to save Dark Pit's life, the doppelganger is determined to save Pit at all costs, though it is possible that he still acts out of selfishness to keep his own life.

Dark Pit, true to his state as a clone, has a very similar fighting style to Pit, almost an exact copy. While he proves to be more aggressive, he can dodge, melee, shoot, and use a variety of weaponry like his rival. During Chapter 6, Pit must fight Dark Pit four times, on and off during the air battle, twice during land battle, and once on the ground. In the two randomly occurring duels, he uses an arsenal of different weapons, depending on where he is. The list below accounts for them:

During the boss battle, Dark Pit will use the Silver Bow. He will use charged dash shots, gets up close and unleashes continuous fire. However, Dark Pit has the added advantage of inexhaustible flight, given to him by Pandora's remains. He will fly around on occasion, moving away from the platform. Aside from shooting, he has two new moves when doing this. First is the standard bow special move, which sends down a rain of arrows. This engulfs the entire platform and can cause huge damage. Second is a charge attack, where he glows purple and charges at Pit.

When playing as Dark Pit in Scorched Feathers, he can change his weapons for any weapon the player provides him with. He also shows the ability to use powers just like Pit. While Pit will often shout Palutena's (or Viridi's, in Chapters 19-21) name when using these, Dark Pit will say phrases such as "Come on!" or "Take this!". Where he gets his power from is never revealed. Dark Pit's indefinite power of flight also comes apparent, as the player flies for most of the level, only landing for the boss battle with Pandora. 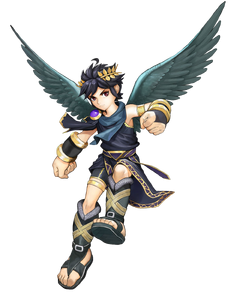 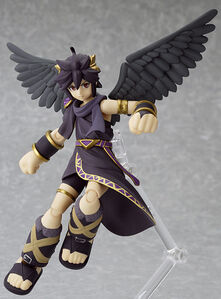 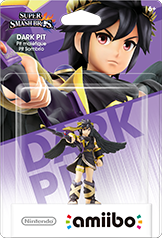 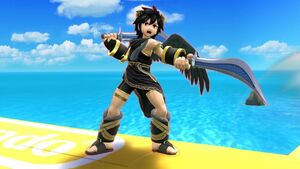 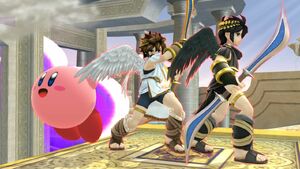 Dark Pit alongside with Pit and Kirby. 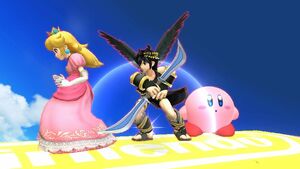 Dark Pit along with Princess Peach and Kirby. 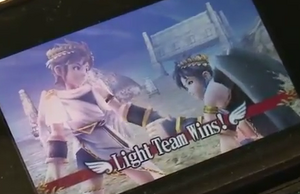 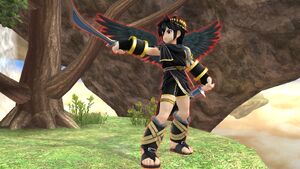 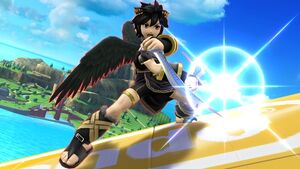 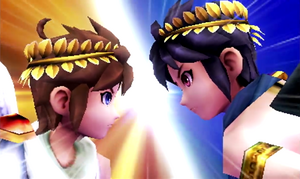 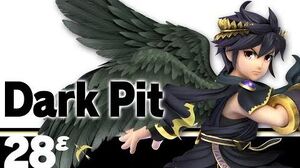