Her name comes from how she is a dark copy of the hero Samus Aran and the reborn form of the Phazon-mutated Metroid Prime.

Similarly to Ridley, another villain of the Metroid franchise, Dark Samus never talks (unless one counts her deep and sinister laugh), this makes it hard for people to analyze her personality, though there are some notable characteristics that she has.

Her name is quite telling, Dark Samus is extremely ruthless and cruel, as she will do anything to win a battle, even risking her allies' lives just because she wants the advantage. She once corrupted Rundas, Ghor, and Gandrayda, so that she would not risk getting damaged. The only creatures she is shown to respect are the Metroids. If her greedy and egotistical qualities were not shown enough yet, she is very materialistic for the Phazon, most likely because of her origins as Metroid Prime as she wants to grow and grow and become more powerful, and if anyone tries to get in her way, she will instantly destroy the threat, regardless if they are friend or foe, even fellow space pirates get killed if they even try to question her goal.

While she has always been insane, her character changes a lot depending on the game, which might be related to her growing from the Phazon, in Metroid Prime 2: Echoes, she is a complete maniac who is completely out of control and has a terrible laugh, while in Metroid Prime 3: Corruption, she is presented much more sophisticated, which can also make her seem more threatening, considering that she can be emotionless while killing people.

After Samus defeated the Metroid Prime, it clung onto Samus's Power suit and tore the Phazon suit off of her in a desperate move to save itself. After Samus leaves the planet, the DNA of Metroid Prime combines with the DNA of Samus and the Phazon Suit in order to reincarnate itself as Dark Samus.

After fully regenerating, Dark Samus left planet Tallon IV to search the universe for Phazon, driven by her instincts from Metroid Prime. Samus eventually found a planet named Aether, which had suffered a war with a dark dimension when strange dark creatures had invaded Aether and its native species, the Luminoth. Dark Samus traveled through Aether and found portals to a dark dimension which she entered, and to her delight, she found tons of Phazon from the meteor impact. Coming and going through the portals, Dark Samus ate all the Phazon she wanted, and grew in power, regenerating herself after her defeat on Tallon IV.

The Galactic Federation, who would later be her enemies, came to Aether and were attacked and killed by the Ing. Dark Samus later found her old nemesis, Samus Aran, come to Aether in search of the Troopers. Samus did not get far before she met Dark Samus, and Dark Samus lured her almost to death in Dark Aether, where the Ing attacked, but only barely missed the bounty hunter. So Dark Samus traversed Dark Aether for awhile.

Samus later met Dark Samus again when she was in the Agon Wastes. Dark Samus was feeding off of Phazon crystals, and Samus entered, unaware of who Dark Samus was. She soon learned she was the Metroid Prime when she used Phazon to attack. This became a fight to the death which Samus won.

Dark Samus exploded into blue particles upon "death". However, it was just a maximum overload and she repaired herself. The particles reached the Torvus Bog, where she solidified and laughed at Samus before flying off. Dark Samus then returned in the Sanctuary Fortress, where she was seen sadistically laughing after gunning down some Space Pirates trying to protect their Phazon. Samus challenged her to an epic elevator battle, in which Dark Samus became invisible after a while due to all the Phazon power. Later, rather than admit defeat, Dark Samus committed suicide by jumping off the elevator tower and falling into the city below.

Dark Samus was unseen through the rest of Samus' adventure, but right at the end, she made a surprise return. Dark Samus returned and she was now skeletal, bereft of armor, and her organs resembled the Metroid Prime's, thus confirming who she truly was. Enraged, Dark Samus blocked off Samus' escape from Dark Aether by gliding and firing Phazon missiles at her, Samus noted that if she repelled them back at Dark Samus it would cause another overload. After enough hits, Dark Samus crashed to the ground and crawled towards Samus, trying to absorb her Light Suit, but she disintegrates and was believed destroyed in Dark Aether.

Despite her disintegration, Dark Samus' particles re-formed in space around Aether. In Metroid Prime 3: Corruption, on the planet Phaaze, the source of all Phazon, she controls the Leviathan Seeds: living creatures that are spawned from Phaaze and contain rooms within their bodies, and carry massive amounts of Phazon.

She plants a seed first into the Pirate Homeworld. Then, Dark Samus, along with the help of the space pirates, leads an attack on the Galactic Federation and manages to implant one of the gigantic Seeds on the planet Bryyo.

Samus manages to stop one seed from crashing into Norion, a planet important to the Galactic Federation. Dark Samus appears then and hits Samus and her bounty hunter allies and implants Phazon within their bodies. Soon after, a Seed is implanted into the planet, Elysia. The Seeds begin to corrupt the planets and the forms of life (In Elysia's case).

To destroy each of the Leviathan Seeds, Samus enters them and must destroy a monster who is powered by the Phazon energy inside (probably inside a lung-like cavity). Every time she destroys a monster, the Phazon released begins to corrupt her even further.

In the end, Dark Samus merges with Aurora Unit 313 to fight Samus, but is defeated, and is destroyed for good.

In Super Smash Bros. Brawl, Dark Samus appears as a trophy and a sticker, the latter of which can be equipped to increase Samus' resistance to battering attacks. An enemy called "Dark Samus" appears on "Co-op Event 7: Battle of the Dark Sides" allied with Dark Link, but it is just a black silhouette of Samus rather than her Phazon doppelganger. In the Subspace Emissary, when Zero Suit Samus accompanied by Pikachu comes across her power suit, they are confronted by two shadow bug Samus's who somewhat resemble Dark Samus.

Dark Samus makes her playable Smash Bros. debut in Super Smash Bros. Ultimate as a playable character. As Samus's Echo Fighter, Dark Samus plays nearly identically to Samus, except her attacks have a shadowy effect, as well as levitating in her idle animation. She was added to the game due to high requests from fans. Her Classic Mode campaign "The Great Poison Given Form" is based on team battles against heroes while allied with dark, evil, or corrupted variants of the heroes, such as Zelda possessed by Malladus against Link, Ken brainwashed by M. Bison against Ryu, and Luigi brainwashed by Nastasia/Dimentio to become Mr. L against Mario, Peach, and Daisy. The only exceptions are the penultimate battle, which is a free-for-all against Ridley and Samus, and the final battle against Master Hand and Crazy Hand. 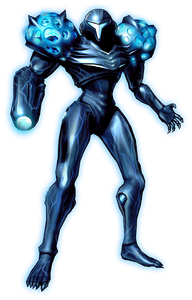 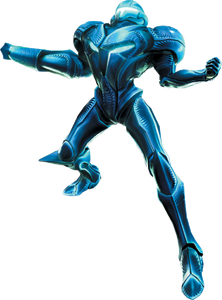 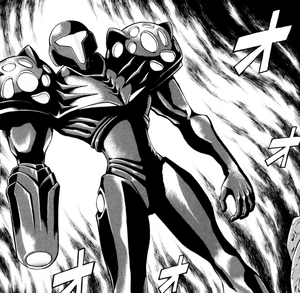 Dark Samus as she/it appears in the manga. 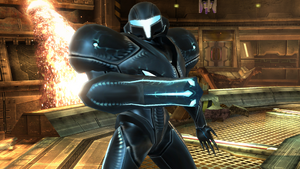 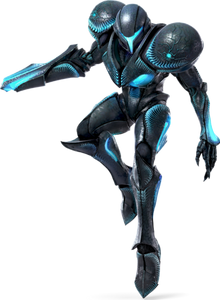 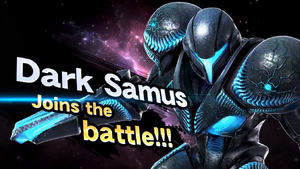 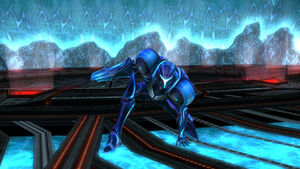 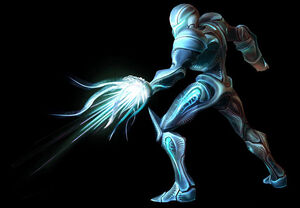 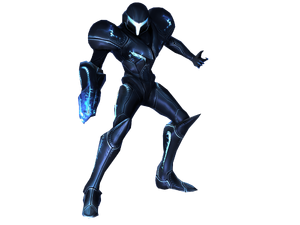 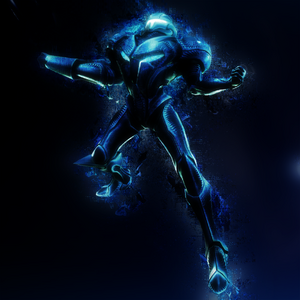 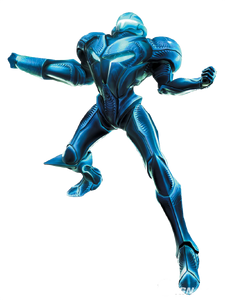 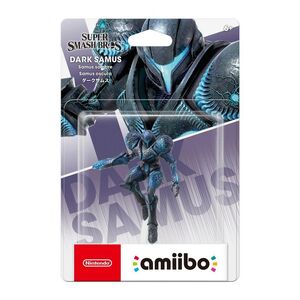 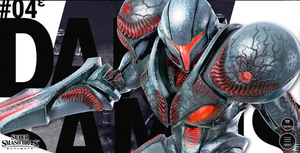 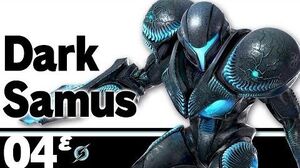 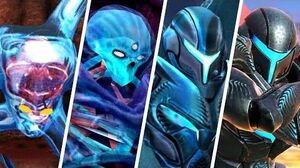