Each members have their own additional agendas and objectives to become Dark Signers (creating a new world, personal vendettas, etc)

Each one is a deceased individual revived by the Earthbound Immortals, enemies of the Crimson Dragon and the Signer Dragons. In their new states, the Dark Signers were given great power and a thirst for revenge. Each Dark Signer, with the exception of Roman and Rex Goodwin, had some sort of personal grudge against or connection to one of the five Signers. The Dark Signers' transformations derived from the Netherworld itself. Because of this, there was no way to undo the transformation and it was said the Dark Signers were no longer among the living. When a Dark Signer is defeated in a Shadow Game, instead of simply dying like they once did, their bodies instead turn to dust. 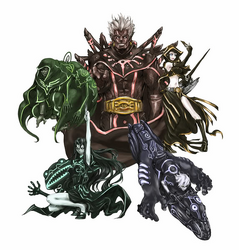