Absorbing power from others.

Plunge the world in darkness.

Defeat Bowser and the Mario Bros (both failed).

The Dark Star, later known as Dark Bowser (in Japanese: ダークスター, Dāku Sutā), is the overarching antagonist of the 2009 Nintendo video game Mario & Luigi: Bowser's Inside Story and its 2019 remake. It is an ancient artifact of terrible power that was sealed away beneath Toad Town. After it was reawakened by Fawful, it absorbs Bowser's DNA and transforms into Dark Bowser, the game's final boss.

When the Dark Star is in its dormant state, it appears as a violet sphere with a black star-shaped mark on its front. When it's active, it gains two pupil-less red eyes and eight black spikes that are constantly rotating around its sides.

Upon absorbing Bowser's DNA, the Dark Star became an almost exact duplicate of him, except that its limbs, head and shell are violet, the mouth, underbelly, spikes and horns are a dull white, its eyes are red with a thick, black rim and no pupils, and its hair is a black mohawk. At first, Dark Bowser appeared ghost-like with a wisp instead of legs, but when it reabsorbed its lost power, it became whole and gained legs. Its voice was almost the same as Bowser's, but with a metallic echo added to it.

At first, the Dark Star was silent aside from inhuman growls and gargles, and could only express its personality through actions alone. After becoming Dark Bowser, it became capable of voicing its desires.

In either case, the Dark Star has a dark and almost emotionless personality, with its ultimate desire being to plunge the world and everyone in it into eternal darkness. When some of its power was drained, the Dark Star will become obsessed with finding and reabsorbing it, or occupy itself by finding other forms of power to absorb, such as a tyrant's genetic code. Dark Bowser was also an extremely cocky and arrogant individual who believed himself to be all-powerful and invincible. This is most evident in his final moments where it is utterly shocked at the fact that it was killed despite being at full power.

The only way to defeat Dark Bowser is to keep attacking him until he assumes his giant form, then punch him in the gut which will eject the Dark Star Core/Fawful. On the next available turn, assuming that Bowser isn't KO'd, the player must hit his Vacuum Block and then mash the X Button quickly to prevent Dark Bowser from sucking it in instead which effectively restarts the battle. Once it is sucked into Bowser, Mario and Luigi must smash it's eyes before destroying it's legs (since it will retract the legs harmlessly into itself if the eyes are intact) and then target the Core on top of it's head (now attackable since it was off-screen and untargetable with the legs intact) and go all out on it whilst avoiding and sometimes sending back it's attacks, The player should use their most powerful Bros. Moves (Mighty Meteor or Magic Window although the latter is more effective since it does far more damage) to quickly eliminate it since the Core will only remain in Bowser for 10 turns. Once the "turn counter" has expired, it will retract into itself and jump out of Bowser before rejoining Dark Bowser and basically restarting the battle from scratch although it will still retain it's lost HP and not heal up.

Long ago, Toad archaeologists unearthed a mysterious artifact that housed a terrible evil. The artifact, which became known as the Dark Star due to its appearance, soon came to life and began attacking the Mushroom Kingdom. It is also theorized that if an evil being were to obtain the Dark Star, they would have the power to dominate the world and plunge it into total darkness. To protect the world from such a reality, the Star Sprites sealed the star in a secret labyrinth deep beneath Toad Town, with only the true monarch of the Mushroom Kingdom having the power to break the seal on it.

At some point, the evil Beanish mastermind and former lackey of Cackletta, Fawful, learned of the Dark Star and begins formulating a convoluted plan to obtain it alongside his own minion, Midbus.

Mario and Luigi: Bowser's Inside Story

During the game's events, Fawful successfully retrieves Princess Peach from Bowser's body (after having him inhale her and everyone else in Peach's Castle) and then heads to Toad Town Caves to obtain the Dark Star, which he does after defeating the guards and destroying the security field. He then heads off to Peach's Castle to take control of it, and using the Dark Star's power, he erects a barrier to prevent anyone from entering. This barrier was ultimately destroyed when the Mario Bros, along with Starlow assemble the Miracle Cure, allowing them to enter the castle, which had been reconstructed to his liking.

After finding Bowser, who had been previously imprisoned in his own vault and thrown into a garbage pit, the Bros re-enter his body and allow him to travel through the castle's interior, which was patrolled by mechanical guards empowered by the Dark Star. He then confronts Fawful and Midbus, who had hooked up Princess Peach and the Dark Star to a machine in order to unseal its full potential. Bowser manages to defeat Midbus, who had been granted ice powers by Fawful, causing him to freeze up, but it was too late to stop the Dark Star from reawakening. Fawful then attempts to absorb the star's evil power into himself, transforming himself into "Dark Fawful", but Bowser punches him away just when the process was half-way done.

Bowser then gloats his victory and planned to take both Peach and the Dark Star for himself. However, the Dark Star began levitating itself around the tyrant before turning into smoke and entering Bowser's body through his mouth, hiding itself within his respiratory system. This causes his chest to start burning, so he uses the cold wind blowing through the frozen Midbus' nose to relieve the pain, allowing the Mario Bros. and Starlow to enter and travel through it in search of the Dark Star while battling several enemies that have either been created or influenced. During which, they witness the star absorbing Bowser's DNA and try to attack it while it feeds, but it counters all of their strategies by utilizing the abilities it copied from Bowser, such as his punching strength, fire breath and shell smash. They finally corner it, but then it separates into four parts and disappears again to absorb more DNA. The parts return and each form a different section of Bowser's body, combining to form a darker version of Bowser with a ghostly wisp. The star then uses Bowser's vacuum breath on the Marios, but only takes Luigi and spits him out afterwards. It then changes back into its original form and engages in battle with the heroes, only to lose.

The Dark Star then turns back into smoke and exits Bowser's body through his mouth, resuming its Bowser-like form, which shocks and enrages the original. Realizing that half of its power was stolen, the newly formed "Dark Bowser" begins searching, absorbing Princess Peach in the process. When it hears Fawful's voice, Dark Bowser recognizes it as the one who took his power, so it punches its way through several obstacles to get to him. Bowser goes after his dark copy, but Dark Fawful finds Bowser and forces him to engage in combat with Peach's Castle itself, which had been modified into a fighting robot by Fawful and empowered by the Dark Star's energy. Growing to equal size with the Mario Bros' help, Bowser defeats the castle and resumes his search of Dark Bowser, who continues its own search for Fawful.

Bowser then finds Dark Fawful and engages him in combat. Despite being empowered by dark energy, the evil Beanish loses the fight and regresses to a small bug-like form, known as the "Dark Fawful Bug". He attempts to run away, but Dark Bowser finds and absorbs him, thus reclaiming the power it lost and becoming whole again, gaining new legs. The fully-formed Dark Bowser then smashes Peach's throne into a secret chamber, with Bowser in hot pursuit. They clashed using their fire and spike ball attacks, and Bowser was able to overcome his counterpart with the Marios' help, and Dark Bowser escapes upwards.

Bowser chases Dark Bowser to a platform atop Peach's Castle. There, Dark Bowser creates a black hurricane that sweeps over the entire Mushroom Kingdom, sucking up everyone within it. Bowser was nearly blown away by the vortex as well, but was encouraged by Starlow and the Mario Bros to continue fighting. Dark Bowser mocks at Bowser's tenacity while claiming victory, but the Koopa King boldly states that the kingdom is his alone to conquer and proceeds to the final battle with his dark counterpart. During the battle, Bowser gets Dark Bowser to cough out the Dark Fawful Bug and sucks him into his own body, allowing the Marios to fight and eventually vanquish him. This in turn causes Dark Bowser to weaken, allowing Bowser to land the final blow.

Dark Bowser becomes shocked by the turn of events, and then reverts back into its original form. The Dark Star then rises into the sky and explodes, dispersing the storm it had created and ending its threat once and for all. Any last remains of the Dark Star were destroyed when Fawful attempted to kill the Mario Bros in a suicidal explosion.

When it is first fought, the Dark Star is inside Bowser's body, faced within the Airway area. It can attack by creating duplicates. After their creation, the Dark Star and its duplicates (known as Satellmites) will charge. Mario and Luigi have to use their hammers to find off this attack. Blocking a Dark Star copy will knock out any Dark Star copy that follows behind, as well. King Boo has a similar move when he is fought in Mario & Luigi: Paper Jam.

The Dark Star can also bring the brothers' shadows to life. Mario and Luigi have to jump to make sure their shadows are undamaged, as any damage the shadows take will be transferred to their respective brother. After its health is cut down to half or lower, more shadows will be created.

After it loses all its stamina (Overkill damage has no effect), the Dark Star will launch a vacuum breath move to deal massive damage. Mario and Luigi have to mash their buttons to escape. After it is done, the Dark Star is defeated.

In the final battle, the Dark Star and Fawful are one. It retains the laser attack, but loses the rest. Instead, it can drag an arrow on the ground (This can be jumped.) and then fire the arrow at a brother depending on the rotation (clockwise for Mario and counterclockwise for Luigi). The Mario Bros. have to use their hammer to deflect the arrow, lest it explodes, dealing massive damage to them. There is an alternative attack in the remake, where orbs are dragged in the first part, but the second half is the same.

Once the Dark Star is destroyed, Dark Bowser is defeated. 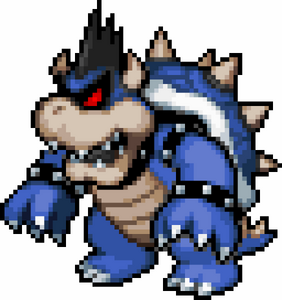 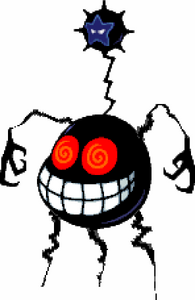 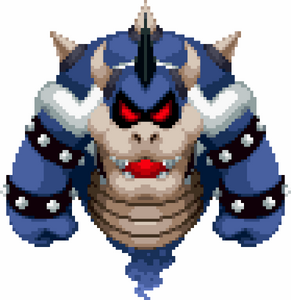 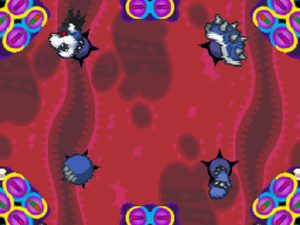 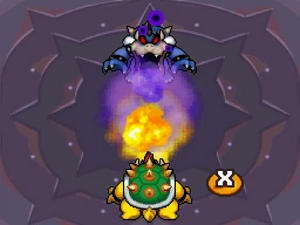 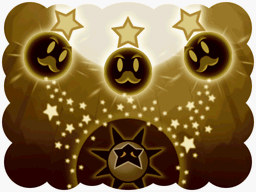 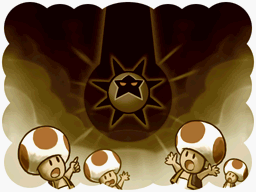 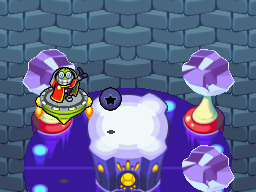 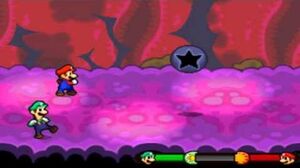 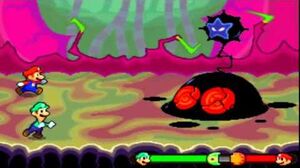