Head of the Blades of the Darkmoon

Head of the Princess Guard
Acting Lord of Anor Londo

Continue the Age of Fire.

Dark Sun Gwyndolin is a minor yet pivotal antagonist and optional boss in Dark Souls. He is the youngest son of Lord Gwyn, the de-facto ruler of Anor Londo, and an integral character in the game's lore.

He was voiced by Harry Lister Smith.

Eons after the war between the Gods and the Immortal Dragons, Gwyn established his own kingdom in Anor Londo where he married and had children. Gwyndolin was the youngest of his sons, and because he possessed inherent abilities associated with the moon (which was considered a feminine trait), he was raised as a daughter.

When Gwyn left to the kiln of the first flame to link the fire and stave off the Age of Dark, he told his family to look after the humans in his absence. Not wanting to let him down, Gwyndolin sought to keep the humans safe and soon had humanity corralled to the north or exiling them to stone prisons to keep the curse of the undead under control.

All of the other deities in Anor Londo would soon leave as well, horrified by what was happening. Gwyndolin, however, decided to stay in the now abandoned city of the gods. Using his power over illusions, he creates an illusion of his sister Gwenevere to help guard over the city.

Despite his lackluster status as a deity, he does manage to gather a group of followers called the Blades of the Darkmoon, a covenant created to find and hunt down those who are guilty of crimes against the gods and claiming vengeance. They accomplish this by reading out a list from the Book of the Guilty from Goddess of Sin Velka.

For this blasphemy against his family, Gwyndolin angrily reveals his presence and will proceed to send his covenant to kill the Chosen Undead. He then fights the Chosen Undead himself when trespassing into Gwyn's tomb, where Gwyndolin supposedly dies.

It is revealed that Gwyndolin survived the events of Dark Souls and is living out his days in what was left of Anor Londo. After some time, however, he contracted an illness so severe that he was no longer capable of leading his covenant, the Darkmoon Knights, which meant his younger sister Company Captain Yorshka had to take command in his stead.

After Aldrich was revived as a Lord of Cinder, he began dreaming of the Old Gods and sought to devour them. He traveled to Anor Londo, which was under the control of his ally Pontiff Sulyvahn; having usurped control of the city from Yorshka after Gwyndolin fell ill and imprisoned the God of the Darkmoon in the cathedral for Aldrich.

As the Lord of Cinder took to slowly devouring Gwyndolin, he gained access to his memories, dreaming about a young pale girl in hiding. He would never fully complete his assimilation of the Moon God, as the Unkindled would slay him halfway through the process, finally granting Gwyndolin peace.

Being a God of Anor Londo, Gwyndolin has a very unique appearance. He wears white silk robes and a golden crown meant to represent the image of the sun.

He also has a very feminine physique, appearing to possess breasts even though he identifies as male. He also has pale skin and silver/gray hair. In the place of his legs, there appear to be snakes. Whether or not these snakes are illusions or real, is unknown.

In Dark Souls III, Gwyndolin's appearance has changed. He wears a new set of dark clothing with gold woven into it. His crown is also different and not quite as ornate as the one he wore before. His health has also deteriorated drastically, becoming severely malnourished. This is most likely the result of Aldrich slowly digesting his body. His lower half is no longer visible, so Aldrich has already devoured it.

Gwyndolin seems to hold a "deep adoration for the sun", including his father and livelihood. He has a deep desire for his father's affections, and not only does he cast in illusionary sunset over Anor Londo to create the illusion of a prosperous city, but he even guards his father's tomb himself, attacking the Chosen Undead should they trespass even though he is fully aware that the tomb is empty. He demands full worship from all who would enter Anor Londo.

Given his power of illusions, Gwyndolin is appropriately a masterful schemer. His illusion of Gwynevere is used to trick the Chosen Undead into linking the fire and continuing his reign in Anor Londo.

As a God like the rest of his family, Gwyndolin was immortal, living beyond the human lifespan. Curiously, he has access to a variety of illusionary sorceries so powerful they range from hiding pathways behind walls to boosting the guard's threatening demeanor to even casting an illusion over the entire city, disguising it under a false sun.

Gwyndolin is also a skilled archer, using his Darkmoon Bow to fire arrows of pure light.

While technically immortal, his eternal life was not absolute. Like other gods, he could be killed by another, be it by the Chosen Undead's hands or by Aldrich, and even fell ill by the events of Dark Souls III. As a god, he is also vulnerable to occult weapons. 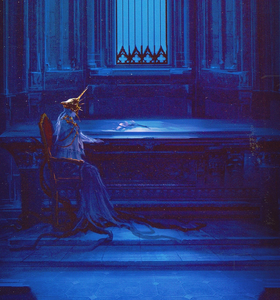 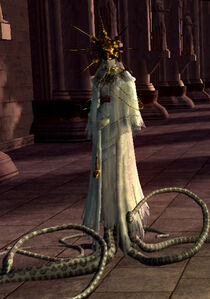 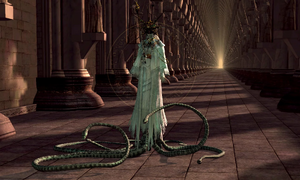 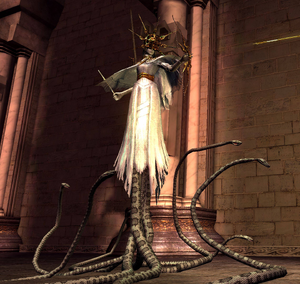 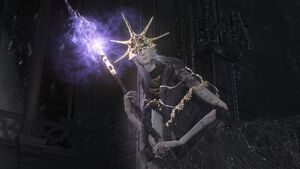 Gwendolin after having been assimilated by Aldrich. 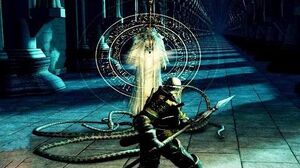 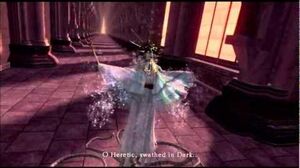