In any case, the Jedi General named Murrtaggh, a perennial enemy of the Dark Underlord, prepared to eliminate the dangerous Dark Lord while his forces were stationed there. Unknown to the Dark Underlord, Murrtaggh paid a large group of Mandalorian mercenaries to stage a diversionary attack on the Black Knights while Murrtaggh prepared to sneak behind the enemy lines to assassinate the Sith leader.

As the battle commenced, the Dark Lord sent his foremost general to lead his forces against the Mandalorians. During the chaos of the battle, Murrtaggh executed his plan and infiltrated the Dark Underlord's fortress. As the two engaged in battle Murrtaggh fell to the dark side, striking down the Dark Lord of the Sith, ultimately killing him and ending his reign of terror once and for all.

The Dark Underlord is completely emotionless, and seems to have enjoyed the destruction of the Jedi when he led the Black Knights of Malrev IV. He has no regret or remorse for all the things he has done, he is a pure Dark Side Force entity. 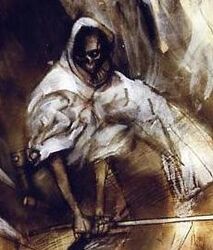