Beast of the Scourge Plague

Eating escapers of the Hypogean Gaol.

Prevent the Hunter from escaping the Hypogean Gaol.

Darkbeast Paarl is a minor antagonist and optional boss in Bloodborne. Much like the rest of the Beasts fought within Yharnam, this creature was once a human that succumbed to the Scourge Plague. Even reduced into an undead skeleton, it is still driven by its feral lust for blood. A stronger version called the Loran Darkbeast can be fought within the Chalice Dungeons.

According to the Spark Hunter Badge that Paarl drops, it may be related to or might be Archibald, a mentioned hunter who invented special weaponry for the Healing Church through the electricity produced by Darkbeasts. Some time ago, Darkbeast Paarl was captured and imprisoned at the bottom of the Hypogean Gaol, a secret prison in Yahar'gul that Kidnappers imprison those who caught the Scourge plague.

At the bottom guarding the exit of the prison is Darkbeast Paarl, a large undead beast that conducts electricity through the fur on its skeleton-like body. It becomes active when the player gets close enough. Although it is an undead beast, Paarl is an incredibly aggressive foe and very agile despite its size. Along with a bite and swipe from its claws, Paarl also deals electrical attacks, including slamming against the ground to create a burst of lightning, and an AoE where it discharges a burst of lightning from its chest. Even with its extreme agility, Paarl is surprisingly fragile, having not a lot of health compared to the other bosses encountered halfway through the game. Hitting it enough times in its legs or from behind staggers Paarl long enough to strike it with multiple powerful blows.

Once Paarl loses a little more than a fourth of its health, it enters its second phase, where it becomes more aggressive and generates even more electricity, making all of its non-electrical attacks be followed up by bolts of electricity. However, Paarl is still susceptible to becoming vulnerable by attacking it from underneath. If staggered, Paarl temporarily loses all electricity until it recharges itself. Once Paarl is defeated, it drops the Spark Hunter Badge and the exit to the Hypogean Gaol opens, taking the player back to Old Yahar'gul.

A stronger version of Darkbeast Paarl called the Loran Darkbeast can be encountered twice within the Chalice Dungeons, on the third layer of the Lower Loran dungeon and the final layer of the Lower Loran Root dungeon. It fights the exact same way as Paarl, only with more powerful attacks and a larger health pool. Its defenses remain the same and it is still vulnerable to being staggered. 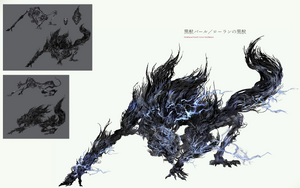 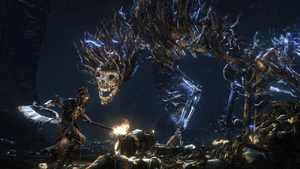 Darkbeast Paarl fighting against the Hunter. 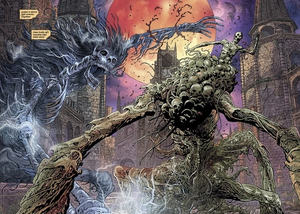 Darkbeast Paarl fighting the One Reborn in Bloodborne: The Veil, Torn Asunder.
Add a photo to this gallery 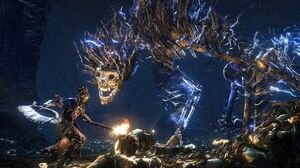 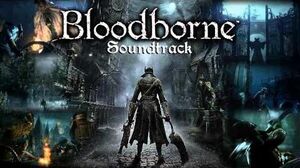 Bloodborne Soundtrack OST - Darkbeast
Add a photo to this gallery

Retrieved from "https://villains.fandom.com/wiki/Darkbeast_Paarl?oldid=3628775"
Community content is available under CC-BY-SA unless otherwise noted.