Being scourges to Gelfling.

Serve Skeksis and obey Skeksis' will.

The Darkened Creatures are created by the Skeksis and, with the exception of the Arathim and Nurlocs, are featured as their loyal minion monsters that carried out their masters' wishes in The Dark Crystal franchise.

The Skeksis bred the Crystal Bats to carry lenses of artificial crystal that sent images of all they saw back to the Crystal in the Castle. At first the bats flew only in the dark, but the Skeksis bred from the bolder and hardier strains, until no corner of the World was unknown to them. And when the Skeksis could direct the Garthim with their all-seeing crystal eyes, they made an end to the Gelfling.

Crystal Bats work in coordination with the Garthim. They fly all over Thra spying out stray Gelfling. They carry a purple crystal that shares what they see to the crystal in the castle.

While Kira and Jen were in the boat, they spotted a crystal bat, which Kira knocked out of the sky with a single shot from her sling. This, unfortunately, did not kill the creature, as it was still able to aright itself in the shallow water of the shore to continue its transmission of their location, which resulted in a Garthim attack on the Podling village later. Another Crystal Bat spied on Jen as he was climbing up Aughra's Hill, which resulted in the Garthim attack on her home later.

Spyeyes were small bug-like furry creatures that the Skeksis attached to prisoners to force them to serve as unwilling spies. The Gelfling Lahr had spyeyes attached to him after he was captured in the Castle on his quest to free imprisoned Gelflings. After his escape, Whouf, the dog-like creature who helped him herd mounders, ate the spyeyes off him, which freed Lahr from their powers. SkekLach the Collector was their chief utilizer.

The Garthim are large clawed warriors and the secondary antagonists of "The Dark Crystal". They were the strike force of the Skeksis, powered by The Dark Crystal. They were created after the Skeksis discovered the prophecy revealing that a Gelfling would reverse The Great Division. The word "Garthim" is a plural noun, with no singular.

The Garthim carried out the commands of SkekUng the Garthim-Master loyally and violently. The Garthim were dispatched to ravage Thra and returned with captive Gelfings or Podlings for the Skeksis to enslave and drain their essence.

The Garthim were huge, tentacled, black-carapaced insect-like creatures, resemble a cross between a beetle and a crab. Armed with powerful claws and they move with a loud ticking sound. The Garthim were also immensely powerful, easily able to smash through stone walls and destroy anything regardless of its construction, including Aughra's Orrery. When not in battle, they stood like sentries in the corridors and pits of The Castle of the Crystal, standing immobile until given a command.

They were created through the combined efforts of SkekTek and SkekUng, and were apparently modeled on sea creatures originating from the urSkek homeworld; however, the 2019 prequel series reveal the Garthim were actually constructed from Arathim and Gruenak parts. The Garthim's sole purpose was destruction, and would follow orders from their Skeksis overlords without question. It was unknown whether or not they could kill a Skeksis if ordered to do so by another, but SkekUng planned to test this when he suspected SkekTek of betrayal. They could also be controlled by the urRu to a limited extent. Aughra expressed doubt as to whether or not they were truly killable, though the Gelfling Lahr discovered that they could be defeated by stabbing at weak points in their armor. They were implacable enemies of the Landstriders which, although vastly outnumbered and outmatched in physical strength, could use their speed to swiftly cripple the Garthim.

When Jen healed the Crystal, and purged it of darkness, the Garthim collapsed into heaps of empty shells: apparently they are not alive in the truest sense.

The Garthim however were not destroyed as Jen had managed to use SkekUng's Garthim staff to reconstitute the Garthim and control them. When the Second Great Division occurred and the Skeksis were freed, Jen used the Garthim to apprehend the unruly creatures to restore order in his court.

The Arathim are a mass of giant spiders that form and function within a hive-mind known as the Ascendency. Originating from the Caves of Grot, they live in the Castle of the Crystal's catacombs due to their banishment by the Skeksis of the Arathim's home.

The creatures later team up reluctantly with the Skeksis, under the orders of SkekSo and SkekVar, to stop the Gelfling Resistance. Once they realize their former home is infected by the Darkening and that the Skeksis have intended to leave them to die, the Arathim switched sides and assisted in helping the Gelflings during the battle at Stone-in-the-Wood.

One member of the Arathim is killed and taken to SkekTek to be tested on. Later on, the Scientist managed to create the Garthim with the Arathim’s parts and, in addition, Gruenak parts.

Nurlocs are a species of worm-like creatures native to the Caves of Grot. While passive in nature, they now turn hostile due to being infected by the Darkening. One Nurloc attacked Deet and attempted to eat her, and a group of Darkened Nurlocs started to ravenously feast on the Sanctuary Tree. 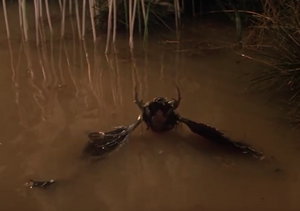 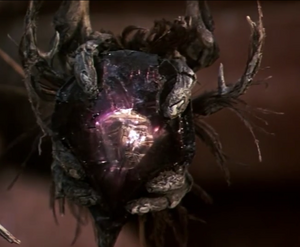 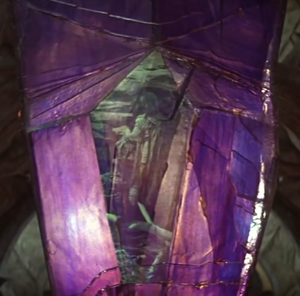 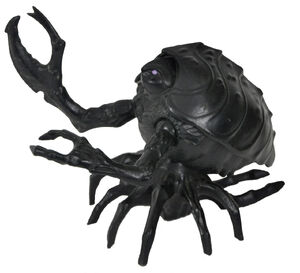 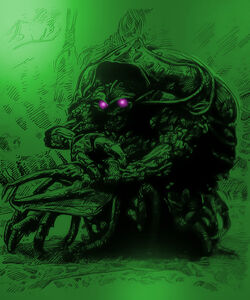 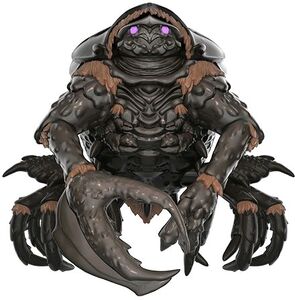 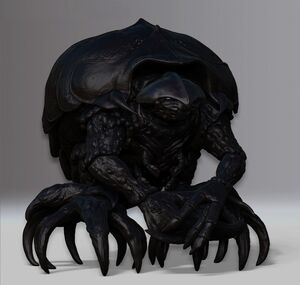 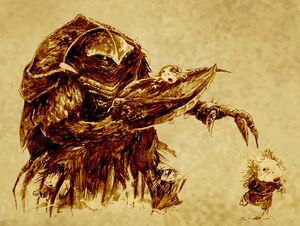 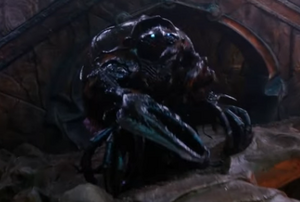 A garthim as seen in episode 10 of The Dark Crystal: Age of Resistance.