The Sleeper
The Betrayer
Jambabla

The Darkest Faerie (also known as The Sleeper and The Betrayer) is the most formidable and diabolical Dark Faerie and the titular main antagonist of the 2005 Playstation 2 videogame Neopets: The Darkest Faerie based on the popular Neopets universe.

She was one of the 12 heroes who founded the city of Altador, but betrayed the others and tried to take over the city for herself. She was turned to stone by Queen Fyora with the aid of fellow founder Jerdana, and stranded at the bottom of the ocean near Maraqua. She escaped after 1,000 years and tried to destroy Meridell and Faerieland, but was defeated by Roberta and Tormund and turned to stone again.

Her original name has long been forgotten and she have  acquired the names of "The Betrayer" and "The Darkest Faerie" long ago following her attempt to conquer Altador.

She was voiced by Pierra Coppola who also voiced Poison Ivy in The Batman.

The Darkest Faerie was the main antagonist and eponymous character of the game. The game opened with Jerdana's Orb falling from the neck of the Darkest Faerie statue, and she escaped her imprisonment. She washed up on the shores of Meridell, and set out to get revenge on Fyora. She started by possessing Illusen and went on to taint the entirety of the kingdom - save for Tormund, who had been given a charm to protect him.

Learning that 1,000 years had passed since she had been defeated, and that she was all but forgotten, she decided to announce her return by destroying Meridell entirely - by crashing Faerieland into it. She surprised Fyora and took over the flying city - the only people immune from her magic were Roberta, who had been given an amulet like Tormund, and an Aisha the Darkest Faerie thought looked familiar - in fact, she was Jerdana. Roberta escaped Faerieland and united with Tor, recognizing that he had the companion amulet to hers.

The Darkest Faerie employed the Gelert Assassin to pursue them, but he was unable to stop them reaching Fyora's wand, which had been used to imprison the Darkest Faerie the first time around. When the pair brought the wand back to Faerieland, however, The Darkest Faerie disguised herself as Fyora so that they would give her the wand, then used it to trap the real Faerie Queen in a bottle. Tormund and Roberta escaped through a portal to Altador, a city it was believed the Darkest Faerie had destroyed before her imprisonment.

The heroes returned from Altador as the Darkest Faerie started the city falling over Meridell. Using Jerdana's Orb, which they had recovered while in Altador, they turned her back to stone and freed Fyora, who used her wand to make Faerieland fly again and save both cities. The Darkest Faerie's statue was kept in Faerieland, where Fyora could keep a close eye on her.

During the Altador Plot, users were guided by a series of puzzles to restore the city's history, which had been concealed by Jerdana to prevent the Darkest Faerie rewriting it, with herself as sole founder. These puzzles involved finding constellations representing each of the twelve founding heroes, include the Darkest Faerie herself. The clue to her constellation is the first one to be found, and is in the markings on the door of to the Restive Tomb.

Ultimately, her statue in the Hall of Heroes is destroyed by the player, as it was where Jerdana had hidden the power source for the history-hiding spell. It was the one place in the city they could be sure The Darkest Faerie would not destroy if she succeeded in taking over the city.

The Book of Ages revealed details about how The Darkest Faerie had came to join Altador in founding the city. The Lupe had set out to save a peaceful farmland from a terrible beast, but after he killed it he was ambushed by another. The Darkest Faerie saved his life, and Altador, who had never seen a Dark Faerie act compassionately, asked her to join his quest to build the greatest city on Neopia. She agreed, and served the kingdom well. Although they had differences of opinion as to how the city should be built - with or without the aid of magic - and how the city's army should be used, Altador came to think of her as a friend - which made her betrayal all the more terrible: "no sword strikes as deep as the one wielded by a friend."

The Darkest Faerie's statue was mentioned in the epilogue of The Faeries' Ruin. It had gone missing when Faerieland had crash landed into the Haunted Woods, and King Altador set off on a quest to recover it. 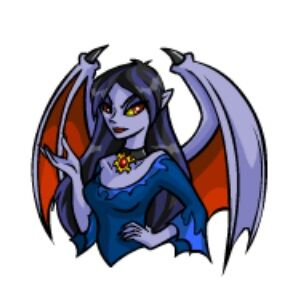 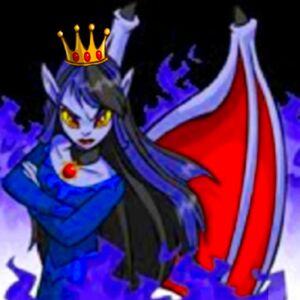 The Darkest Faerie knows no boundaries to her greed and her lust for power.