The Darkin are a villainous race of fallen god-warriors imprisoned in sentient weapons that appears in the fantasy MOBA videogame series League of Legends.

Once Ascended warriors of Shurima, the fall of the empire at the hands of Xerath led to a great civil war across the continent known as the Darkin War. Hungry for power, the Ascended that would become known as the Darkin transformed their own bodies using dark blood magic, which corrupted them beyond recognition. At the end of the war, the Darkin were sealed away in the form of sentient weapons, which only centuries later have begun to be rediscovered.

In ancient times, the Ascended were the protectors of the great Shuriman empire. Once mortal beings, these god-warriors were blessed with the power of the sun itself, granting them immortality and great celestial might. Because of this, they were often called Sunborn, and defended their emperor from the terrible threats of the Void.

During the Icathian rebellion, some rebels decided to weaponize the Void to aid their war effort, and the Ascended were forced to fight off the Void for many years. This conflict gave them a common threat to defeat, but when the Void was finally driven off, the Ascended were left with little purpose left. The war against the Void had taken a toll on the minds of many Ascended, leaving some corrupted and many thirsty for revenge against Icathia. To make matters worse, the fall of Shurima, after the assassination of Emperor Azir and the destruction of the great city, left the Ascended with no ruler to follow, which in turn led to a civil war between the rivaling factions of god-warriors.

One of these factions sought to conquer the ruins of their homeland, as well as the rest of Runeterra, for themselves, using forbidden blood magic to transform themselves into grotesque, monstrous beings. Striking fear into the hearts of mortals, these corrupted Ascended came to be known as Darkin, and fought against the Sunborn, mortals, and even the Aspects of Targon in the Great Darkin War. The war was long and the reign of the Darkin was terrible, but in the end, the corrupted warriors were defeated and sealed away into their own weapons. These weapons were hidden away, meant to hold the Darkin for all eternity to prevent their reign of terror from ever taking hold again.

As of today, only five Darkin are known to remain in Runeterra. Over the centuries they've been collecting power, perfecting techniques to possess any mortal hosts foolish enough to wield their weapons. When they are finally free, all of Runeterra will be in their warpath, and their may be no stopping them from unleashing ultimate destruction. 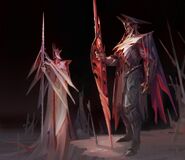 As We Fall Varus Music Video - League of Legends