Engulf the world in darkness (formerly).

Darkrai, also known as the Pitch-Black Pokémon, is a Dark-type Mythical Pokémon originating from Generation IV, and a member of the Lunar Duo alongside Cresselia. Although in the anime, Darkrai is seen as a hero, in some video games, he is a villain who is bent on ruling the whole world of Pokémon and making it a world of darkness. His most important role as a villain is in Pokémon Mystery Dungeon 2: Explorers of Time, Darkness, and Sky, where he is the main antagonist of the game.

Darkrai is the final boss in the video game Pokémon Ranger: Shadows of Almia, though he does not initially appear as a villain in this game, but must be stopped from engulfing Almia into darkness. Darkrai's power is exploited by Blake Hall, the main antagonist of the game. Blake uses Darkrai and the black crystal that Darkrai protects to fuel his machine. But when a malfunction occurs, Darkrai becomes enraged, becomes even more powerful, and engulfs Blake into a black hole, which was Darkrai's Nightmare technique. However, when the hero uses the power of the red, yellow, and blue crystals collected earlier in the game, Darkrai is able to be stopped.

In the post-game of Pokémon Legends: Arceus, Darkrai can be encountered during the request "The Darksome Nightmare", where it ambushes the player at night in the Clamberclaw Cliffs. The request can only be obtainable if the player has a savefile of either Pokémon Briliant Diamond or Pokémon Shining Pearl on their Nintendo Switch.

Darkrai only appears in Super Smash Bros. Brawl as a trophy.

Darkrai appears in Super Smash Bros. for Wii U and 3DS as one of the Pokémon emerging out of a Poké Ball, or Master Ball. When Darkrai emerges from the Poké Ball, he unleashes a Dark Void. Anyone who comes in contact with the Dark Void will be put to sleep, and those that are asleep will be dealt with heavy damage due to Darkrai's Bad Dreams ability.

In "Smash Tour" on the Wii U version, Darkrai is a red item trophy. When used, he will make a selected opponent start the battle asleep.

Darkrai returns in Super Smash Bros. Ultimate as a Pokémon that appears from a Poké Ball or Master Ball. He fights the same way he did in Super Smash Bros. 4 by using Dark Void to put fighters to sleep and damage them with his Bad Dreams ability. He cannot be summoned on the 3D Land or Jungle Japes stages.

In "World of Light", Darkrai appears as a support spirit, which grants the user immunity to falling asleep during battle. His Spirit Battle is against Greninja on the Luigi's Mansion stage with a sleep-inducing floor. Darkrai is summoned from a Poke Ball by the enemy and only Black Hole items will spawn.

Darkrai appears in the arcade version of Pokkén Tournament and Pokkén Tournament DX as a playable character, and one of the only two Dark-type fighters in the game alongside Weavile. He is labeled as a Technical style fighter, using both close and long range Dark attacks. One of his moves enables Darkrai to put the opponent to sleep and drain their dreams to replenish his health. His burst attack is Infinite Eclipse, in which Darkrai makes the opponent hallucinate before turning massive and crushing them in his claws.

Darkrai's Poképark incarnation is a nihilistic creature that is very lonely, but risks the whole Poképark's existence only so that he can get "friends", in which most of them would be because of being a fearmonger.

Easily the darkest and most evil incarnation of Darkrai, here, he is once again very destructive, nihilistic and sadistic, but has more sinister goals compared to the other versions. 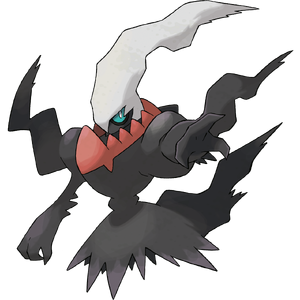 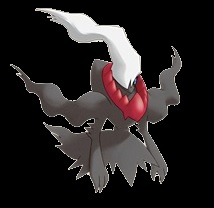 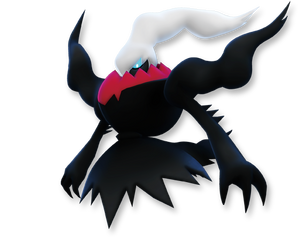 Darkrai in Poképark 2: Wonders Beyond.