Rule the entire universe and reshape it into his own image.

Destroy the Justice League.
Kill Superman (all failed).
Kill Trigon (almost succeeded; failed when both were sucked into the boom tube).

He is the ruler of Apokolips, who seeks to rule over the entire universe and destroy all those who oppose him, first of all, the Justice League.

In Justice League: War, he was voiced by Steve Blum. In Reign of the Supermen and Justice League DARK: Apokolips War, he was voiced by Tony Todd, who also played Candyman in the franchise of the same name, Grange in The Crow, Captain Darrow in The Rock, Earl Jenkins in Smallville, King Deucalion in Minotaur, Shadow in Shadow: Dead Riot, Benjamin Juma in the 24 franchise, The Fallen in Transformers: Revenge of the Fallen, Dreadwing in Transformers Prime, Zoom in the Arrowverse and Luther Thompson in Scream.

Sometime before Doomsday's creation, Darkseid's eyes had fully regenerated and he decided to employ strategic warfare against the Justice League rather than directly attacking them like last time. While he has created Doomsday and indoctrinated the beast into despising Superman before unleashing him on Earth inside an asteroid projected onto Earth via a Boom-Tube. Doomsday's asteroid shell accidentally collided with the Excalibur space shuttle and as a result Hank Henshaw, Terri Henshaw and the rest of their crew were killed.

Taking an interest in Hank Henshaw and his disappointment for Superman's failure in saving him and his wife, Darkseid used his power to bring Henshaw back to life before transferring his essence into a Cyborg body and deployed him to Earth under the guise of a false savior who was meant to deceive the people and even the Justice League into a false sense of security by making them believe he is their new Superman and protector.

When Darkseid finally realized that Superman has survived from his encounter with Doomsday, a surprised yet ecstatic Darkseid immediately ordered Henshaw to open a Boom-Tube so that Darkseid may personally kill the Man of Steel. After Henshaw state that killing Superman is his desire, Darkseid used his power to force Henshaw to open a Boom-Tube. However, due to Lois Lane's manipulation and mockery of Henshaw's desire to kill Superman, Henshaw ripped out the implant in his head and closed the Boom-Tube, angering Darkseid.

While the Justice League briefs over their planned attack on Darkseid and Apokolips, Darkseid, unbeknownst to the League, is listening in on the briefing via Cyborg's Apokolyptian technology, becoming aware of their plan. Upon the Justice League's arrival at Apokolips, Darkseid is one step ahead of their entire plan, sending his army of Paradooms, genetic hybrids of Parademons and Doomsday, to attack them. With the overwhelming might of the Paradooms, as well as Darkseid himself, the Justice League is completely decimated. Darkseid uses his omega beams to bifurcate Aquaman, killing him. Then he rips Cyborg's arms off after the latter helps Shazam escape, while the Paradooms overwhelm the rest of the League. With the Justice League defeated, Darkseid chooses to spare some of them, notably Superman, Batman, Wonder Woman, Cyborg, Flash, Martian Manhunter, Mera, and Hawkman, and killing off those he had no plans for. Darkseid laces Superman's body with liquid Kryptonite to leave him in a de-powered state, straps Batman to a Mobius chair to torture him, forces Flash to endlessly run on a treadmill to serve as a power generator, forces Cyborg to subjugate into Apokolips itself and brainwashes him to become subservient, and brainwashing Wonder Woman, Martian Manhunter, Hawkman, Mera, and later Starfire (after the Paradooms' invasion on Earth killing the Teen Titans) to become his Furies while equipping their torn bodies with cybernetic parts.

Two years later, Darkseid has gained almost complete control over Earth, as well as most of the space sector. Darkseid has brainwashed Batman into becoming his right-hand man, leaving most of his duties in Batman's hands. In order to thwart any remaining resistance, Darkseid departs for Oa to destroy the remainders of the Green Lantern Corps. Lex Luthor, acting as a New God representative, works as a liaison between Earth and Apokolips, and Darkseid tasks Batman with giving him orders as well as keeping an eye on him. On Oa, the remaining Green Lanterns are left utterly helpless by Darkseid's might, as they are easily killed off while Oa is destroyed. Batman reports to Darkseid about Lex Luthor's betrayal, who orders him to send the Paradooms to Earth, and to send a portion of Earth's magma to Oa to decimate it, killing off John Stewart, the last remaining Green Lantern in the process. With Oa destroyed and no one left to oppose him, Darkseid returns to Apokolips.

Darkseid reappears to confront the resistance force, consisting of Superman (wearing Lex Luthor's Kryptonite battle armor), John Constantine, Raven, and Damian Wayne, after they invade Apokolips. Darkskeid watches as Batman fights his son, ordering him to finish him off. However, the resistance force manages to break Batman free of his programming, and Batman retaliates by throwing Damian's sword into Darkseid's eye. Disappointed in Batman, Darkseid fires his omega beam, but Damian steps in the way of the attack, mortally wounding him. When Raven loses control of Trigon and Trigon assumes Superman's body as a host, Trigon turns his attention to Darkseid and the two fight as Darkseid is pushed back by Trigon's might.

After the death of Lois Lane on Earth, Superman regains control of his body and regains his powers (Trigon had removed the liquid Kryptonite when he assumed control of him) and fights Darkseid in an equal battle. When Superman appears to be pushed back, he is saved when Trigon (given a physical form by John Constantine and Raven) takes over the battle, eager to take down Darkseid and claim his position as the top of the universe. While Darkseid is barely able to defend himself against Trigon, he becomes aware of Cyborg's plan to transport him and Trigon into a black void and tries to escape, but Trigon drags him into the void, leaving them along with the Paradooms and Cyborg, still fused with Apokolips, trapped forever.

However, despite the enormous defeat of Darkseid and his forces, Batman said the damage has been done and people will die in the millions as a result of a third of the magma being drained by the Reapers. As a result, Constantine requests Flash to reset the timeline by making another Flashpoint to undo all the damage Darkseid did even if that means that some of them could be affected either negatively or positively by the change. In spite of this, Flash does so, resulting in another timeline which surely resurrects many heroes and villains by erasing their original fates, which possibly means that Darkseid may have well been freed in the new timeline. 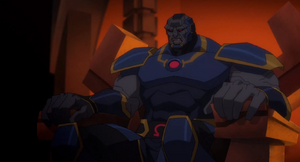 Darkseid sitting on his throne. 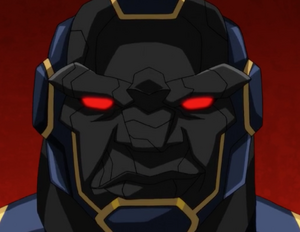 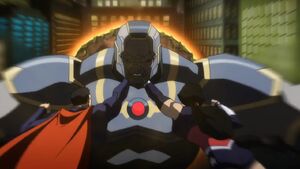 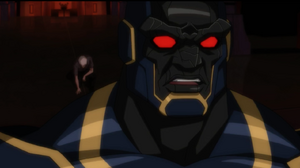 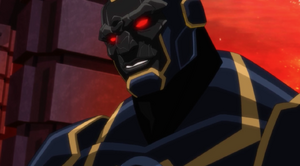 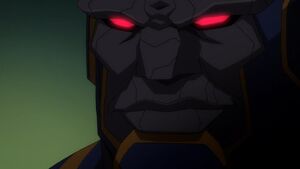 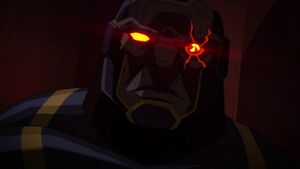 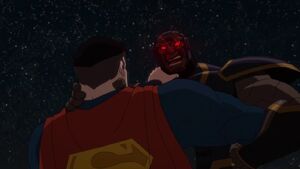 "You have spirit, Kryptonian!" 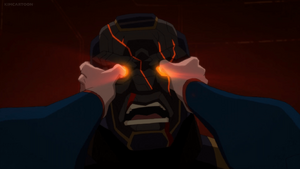 My Eyes are Cursed! 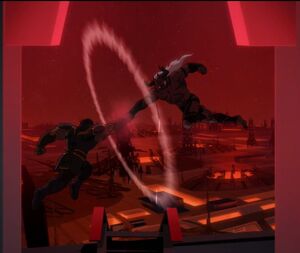