Kill Superman and the Justice League.

Rule/remake the universe in his image.
Destroy Earth (all failed).
Discover the Anti-Life Equation (succeeded).

He was voiced by Michael Ironside, who also portrayed Richter in Total Recall, Colonel Dugan in The Next Karate Kid and Emperor Zanramon in the 2012 Teenage Mutant Ninja Turtles series.

Darkseid seeks to bring the entire universe under his control. To achieve this end, he seeks the cosmic power of the Anti-Life Equation, which theoretically will enable him to control any and all existing life in the universe. Darkseid's perpetual rival is Highfather, the leader of New Genesis ― Apokolips's sister planet. For thousands of years, Apokolips and New Genesis waged war, claiming millions of lives until an truce was finally agreed upon. To seal their bond, Highfather and Darkseid exchanged their infant children: Highfather would look after Darkseid's son Orion and Darkseid would raise Highfather's son Scott Free. Scott, despite the influence of Darkseid and Granny Goodness, grew up to become a freedom fighter in opposition to his adopted father.

Orion took to the lessons of New Genesis and became an enemy to Darkseid as well. Though maintaining an uneasy peace, Darkseid still looked to acquire power without Highfather's interference. He soon took notice of the planet Earth, not only for its vast natural resources and vulnerable population, but also because a potential rival had appeared amongst the otherwise "unworthy" masses: Superman. In an effort to gauge Superman's power (as well as prepare Earth for his coming) Darkseid aided Intergang by supplying powerful weapons of his world to the greedy human criminals. Darkseid ordered his servant Desaad to destroy Superman, but his device failed. After his son Kalibak disobeyed orders by battling Superman, Darkseid made his presence known to the Man of Steel, injuring Superman with his Omega Beams before disappearing into a boom tube. Darkseid would later launch a full attack on Earth, beginning with the massive destruction of a nuclear facility in an effort to recreate the fire pits of Apokolips. Superman was again effortlessly defeated in personal combat and bound to the head of Darkseid's war machine.

The invasion would have succeeded if not for the timely intervention of Orion and the armies of New Genesis.

Orion declared that Earth was off-limits on decree of Highfather, and Darkseid grudgingly retreated (claiming he did not wish to spoil his reunion with his son Orion via bloodshed), but not before murdering Dan Turpin in front of all of Metropolis, then escaping through a boom tube before Superman could get to him. Darkseid would orchestrate several attacks against Superman, though keeping his word by avoiding a direct invasion of Earth. He dispatched Granny Goodness to build a device that would pull a comet to Earth, but was thwarted by Supergirl. His most crushing blow to Superman finally came when he brainwashed the hero into believing Darkseid had adopted him. He sent Superman to lead an invasion of Earth. Though Superman fought against the conditioning and eventually managed to break free of it, Darkseid had at least partially achieved a victory by shattering the public trust of Superman. Unfortunately for Darkseid, he had finally pushed Superman too far.

The Man of Steel invaded Apokolips, swatting aside the forces between him and Darkseid's palace, finally clashing directly with the Dread Lord of Apokolips. Darkseid gained the upper hand, telling Superman he would kill more humans, and was about to finish Superman with his Omega Beams when Superman clamped his hands over the overlord's eyes. The backlash of energy exploded against Darkseid's skull, wounding him grievously and knocking him unconscious. Superman threw Darkseid's prone form at the feet of his subjects and declared them free. However, the Lowlies respectfully carried their lord from the battlefield before an astonished Superman, with Darkseid reminding the hero, "I am many things, Kal-El... but here, I am God".

In the quest for the Anti-Life Equation, Darkseid invaded a sector protected by New Genesis, thus violating the rivaling planets' ancient peace treaty. Orion's fleet was waiting for Apokolips's invasion force and shattered Darkseid's armada. Upon this, Highfather gave Darkseid an ultimatum assuring that the next breach of their treaty would result in his annihilation. While Apokolips was rebuilding its military forces, the villainous Kryptonian supercomputer Brainiac arrived with the intent of assimilating the planet.

Darkseid secretly approached Brainiac and offered him to hand over Superman and in return, Brainiac would spare Apokolips. So, Darkseid went to the Justice League and asked for their help to battle Brainiac, to which Superman reluctantly conceded. In Apokolips, Darkseid and Superman fought together until Brainiac's forces retreated. Darkseid told the League to follow and finish him off, which they did. Afterwards, Darkseid boom tubed inside Brainiac's headquarters just in time to vanquish the League, thus delivering his end of the bargain: Superman. When Brainiac started extracting living DNA from Superman, Darkseid implanted a device that overrode Brainiac's control circuits, turning him into his puppet. Darkseid intended to use Brainiac's program to collect the Anti-Life Equation and reorder the universe at his will. At that point, Orion, Batman, and Wonder Woman showed up to thwart him.

Orion and Darkseid exchanged punches, but Darkseid was victorious over his son. Darkseid attempted to leave the asteroid, however, he was intercepted by Superman, who was determined to hold him inside until its destruction. Darkseid fought with everything he had, but was overpowered by the Man of the Steel finally. Superman tried to finish him off but Batman intervened though Superman was intent on finishing the long awaited fight. Not wanting him to become his enemy, Batman opened a Boom Tube, that sent him, Superman, and the unconscious Orion to safety while Darkseid was left stranded within the exploding headquarters. Despite his circumstances, Darkseid rejoiced and scorned Superman as a "loser" with his last breath before being destroyed with the asteroid.

Darkseid returned thanks to Lex Luthor, who had been trying to resurrect Brainiac instead. Darkseid, now enhanced by Brainiac's power as well, showed his gratitude to Luthor by unleashing the Omega Beams upon Luthor's spacecraft, destroying it. He then returned to Apokolips, halting the power struggle between Granny Goodness and Virman Vundabar in his absence. His return shocked his followers who immediately accepted him as their leader once more. Seething with hatred and vengeance for Superman, Darkseid declared war on Earth, implying that his treaty with Highfather would no longer apply as he was heading there afterwards.

He launched simultaneous attacks across the globe and set up magma-tappers to ignite Earth's core and generate fire pits, thus creating Apokolips on Earth. Darkseid found himself opposed not only by Earth's military and the Justice League, but by the surviving members of Luthor's Legion of Doom who had escaped death at Darkseid's hands only days earlier. With his flagship hovering above the Daily Planet, Darkseid was assaulted the unlikely trio of Superman, Batman, as well as Lex Luthor. Upon this, the Lord of Apokolips vowed to kill the Man of Steel, but not before making him and everyone he loved suffer dearly.

The two engaged in battle, demolishing the Daily Planet along the way. Darkseid was repeatedly hindered by Batman, who was then targeted by his Omega Beam but evaded it after having one of Darkseid's pawns take the blast. Darkseid was impressed to see how Batman adroitly dodged it, remarking on him being the first person to do so. He turned to Luthor to see if he would be as lucky, but Luthor promptly fled, an act Darkseid remarked as wise strategy. Then, Superman thrashed Darkseid across the city with his full might, but the tyrant managed to gain the upper hand by using a hidden pain amplification weapon ― the Agony Matrix. Darkseid gloated upon Superman's pain, but was impressed by his endurance and proclaimed how he was going to carve out his heart with a Kryptonite blade as a token of mercy. Darkseid would have succeeded, if not for Lex Luthor stepping in on time to bestow Darkseid with his greatest desire ― the Anti-Life Equation. Superman was forgotten, as Darkseid was mesmerized and overwhelmed by the Equation's dazzling beauty. He took it on and complimented its beauty, something Luthor agreed with before they vanished into thin air. The Justice League suspects that both of them survived and will be back in the future. However, both Darkseid and Luthor were absorbed into the Source Wall, as such is the fate of those who gain the Anti-Life Equation, where they will remain likely for all eternity. 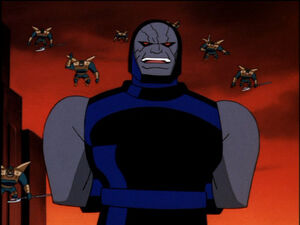 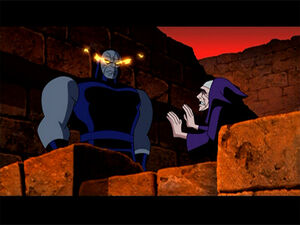 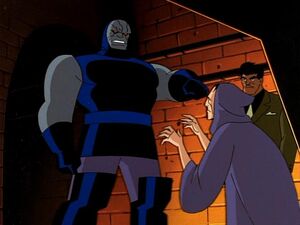 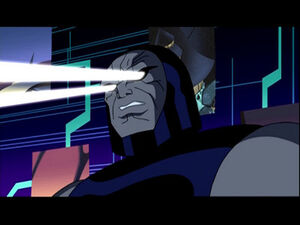 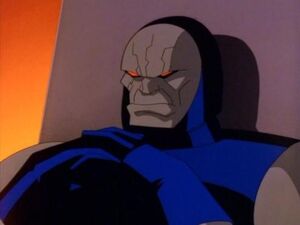 "I can't believe he is blood." 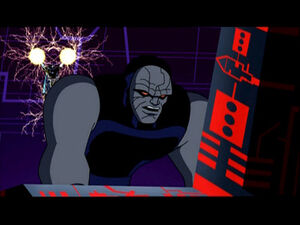 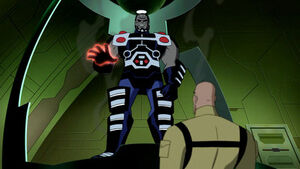 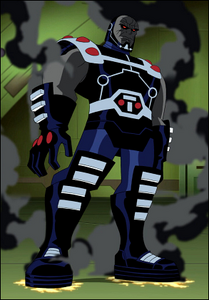 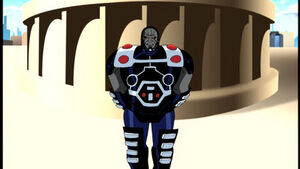 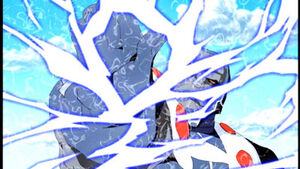 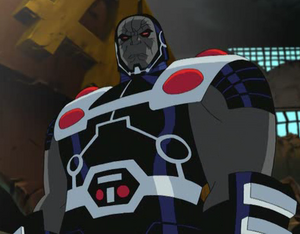 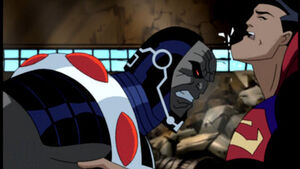 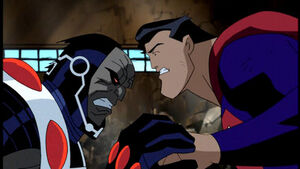 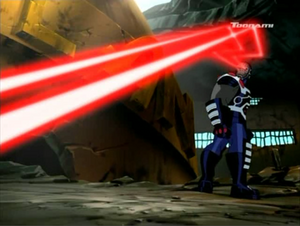 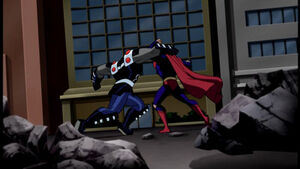 Darkseid and Superman having their final battle with each other. 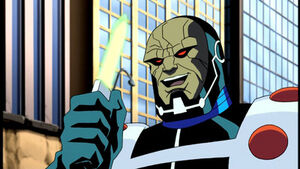 Lex Luthor and Darkseid get sucked into the Source Wall.
Add a photo to this gallery 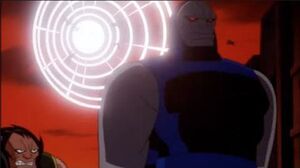 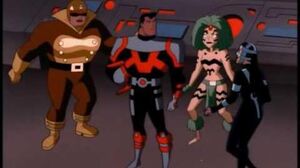 Darkseid Returns-0
Darkseid return back to Apokolips and stops a civil war.