Possessing people with a pure heart.

Return to Earth to corrupt it once more (failed).

Darkseid is the main antagonist of the tenth and final season of Smallville, and therefore the show's final antagonist.

Darkseid first appears at the end of the Season 10 premiere "Lazarus," materializing on the crow's nest and roaring skyward.

In "Supergirl," he possesses radio show host Gordon Godfrey and uses him to spread propaganda about superheroes, turning a majority of the public against them. Lois Lane seeks to discredit Godfrey and corners him in Club Desaad, a fetish club, where she snaps photos of him cavorting with two latex-clad women. Darkseid emerges within Godfrey and takes Lois captive, intending to use her to lure Clark Kent to him. The ruse works, and Darkseid taunts Clark about his inner doubts, sensing that Clark nearly killed someone before and that he wants to do the same to Darkseid. He vacates Godfrey's body and prepares to possess Clark, only to be warded off by Kara Kent using her Kryptonian bracelet.

In "Patriot," Darkseid is revealed to have been marking certain individuals (such as General Slade Wilson) with the Omega symbol.

At the end of the episode "Scion," Darkseid materializes before Lionel Luthor after the latter visits Lex Luthor's grave and expresses a wish for his son to be returned to life.

The penultimate episode "Prophecy" reveals that Darkseid had a son named Orion whose bow Oliver Queen goes in search of in order to remove his own Omega symbol.

In "Finale," the planet Apokolips begins to descend upon Earth. Tess Mercer is captured by Lionel, who plans to transplant her heart into LX-0, a clone of Lex manufactured from different body parts taken from other clones. Tess, however, manages to get free, shoot Lionel, and escape. As a mortally-wounded Lionel crawls toward LX-0 in a secret room, Darkseid materializes and Lionel asks him to return Lex to life; Darkseid agrees in exchange for Lionel's soul and rips out Lionel's heart, which he then puts into LX-0's body, restoring Lex to life.

Later, Darkseid possesses Lionel's corpse to confront Clark in the Kent barn. After a tense verbal standoff in which Clark bravely vows to defend humanity against him, Darkseid telekinetically strangles Clark and declares that he will lose his soul and that he (Darkseid) will annihilate him. Darkseid then throws Clark through the air, but Clark, after experiencing a vision of Jor-El showing him all the trials he's been through over the last ten years, finally gains the ability to fly and flies right through the entity and his vessel, seemingly killing him.

Later, after donning the Superman costume, Clark flies toward Apokolips and pushes it away from Earth, sending it back into space and removing the Omega symbol from everyone.

One year later Lois and Superman accidentally transported to a parallel Earth known as Earth-Omega. on this world Planet Apokolips managed the merge with this planet and among the ruin there was fallen ships of the Monitors wrecked Manhunters and skeletons of dead people with the Omega symbol on their forehead.

Superman getting curious if the Monitors didnt do it who did. Suddenly he hears a very faint sound, similar to a heartbeat so together with Lois they head towards its source to find out what exactly it is.

They discovering the origin of the noise which was a dark figure calls to him from the rubble, figure tells Superman he knows he is Clark Kent.

He ask how he know this, the figure turns and says they have fought each other in the past and then reveals himself as Darkseid, saying that he never forgets a face. Superman and Lois continue talk with the ruler of the Apokolips which he confirms he is the version of the Darkseid they meet in Main Earth he tells them that there isn't any other version of him in the multiverse.

Darkseid tells Clark how he travels to many universes, simple for Death and Destruction nothing more, he also mentions the only reason Superman achieved to defeat him before was because he hadn't reached his full strength at the time. However, the Monitors succeeded to break him, when he had already conquered this world.

Superman wanting a deal with the Darkseid to help them board on one of the Monitors' ships flying overhead, and in return Clark will also give him something. Darkseid accepts the offer so, while Superman carries Lois and follows the Monitors' ship into the atmosphere, he fires his Omega beams towards the ship, opening its side door so Superman and Lois can get inside it just before the ship enters the Bleed.

Back on the planet's surface, Darkseid holds the crystal shard that contains the presence of Jor-El from Earth-Majestic. He says this feels like a second chance and throws the shard into the distance. A fortress of solitude forms, and Darkseid says it could be a new beginning, a "New Genesis." 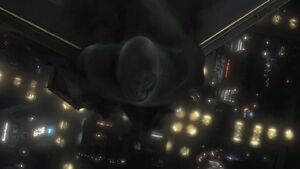 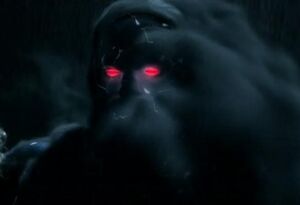 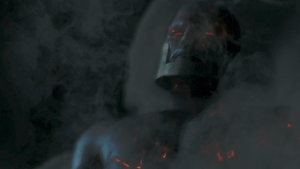 Darkseid reveals himself.
Add a photo to this gallery
Retrieved from "https://villains.fandom.com/wiki/Darkseid_(Smallville)?oldid=3436646"
Community content is available under CC-BY-SA unless otherwise noted.