Destroy all Life on Earth.

Darkseid is a major recurring antagonist from Teen Titans Go!. He is an evil alien overlord who reigns king of the planet Apokolips and plans on destroying all life on Earth.

He was voiced by "Weird Al" Yankovic, who also voiced Dr. Screwball Jones in Wander Over Yonder and The Learnerer in WordGirl.

In "Two Parter", Darkseid captured The Justice League and took them to planet Apokolips, where he planned to destroy them, by dropping them in a vat of lava. The Teen Titans tried to stop him but as Darkseid made his evil monologue, they could not get over how his voice sounded so gruff and gravelly and they just had to comment on it. Darkseid admitted that the reason for this was because he had a cold. Starfire offered him a lozenge and Darkseid took it, which cured his cold, but in the process, it made his voice sound very high-pitched and wacky. With that, the rest of Darkseid's monologue did not go as well as before, as his new voice made him sound underwhelmingly nonthreatening. Everything he said about destroying the entire planet Earth with his anti-life equation, just didn't give the Titans the dramatic fight the plan truly warranted.

Cyborg commented that Darkseid's new voice made him sound like Weird Al Yankovic. Darkseid would later go on to say that he can't begin to amount to the pure evil of Weird Al Yankovic, as nobody could ever be so cruel as to make a living off of mocking and ridiculing other people's musical work and then profit off of it. The Titans disagree about Weird Al Yankovic being evil, as they think he's a pretty heroic guy, and they argue with Darkseid on this.

Their argument later turns into a fight, where Darkseid easily destroys all of the Teen Titans (except for Cyborg) in a quick curb-stomp battle. However, Cyborg is able to utilize his Green Lantern powers to blast a giant green laser at Darkseid, eradicating him from existence, instantly.

In "The Streak", Darkseid made a brief cameo during a montage, where he was beaten relentlessly by Robin for accidentally littering. Darkseid ached in pain, as he struggled to pick up his candy wrapper and plop it back in the previously barely-missed trashcan, where it belonged.

In "How's This For a Special? Spaaaaace!", Darkseid made his second major appearance, where he was still voiced by Weird Al Yankovic. In this special episode, Darkseid went to intergalactic court, to propose the integration of Apokolips into The Solar System. Robin was against him, not wanting such an evil planet to be associated with their Solar System but Darkseid won the case when he told the court that if Apokolips joined the Solar System, the closest thing that would come to a negative benefit would be that all of the life on planet Earth would be eradicated twice every year. The court liked this and they approved his motion. 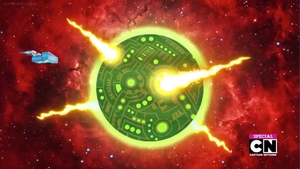 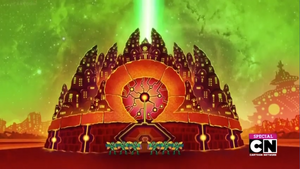 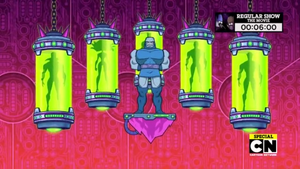 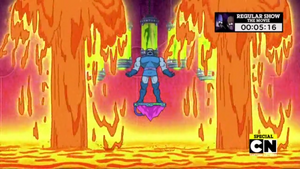 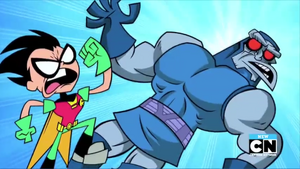 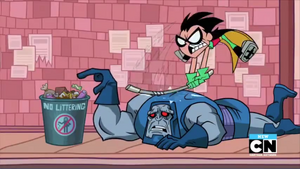 Darkseid getting punished for littering 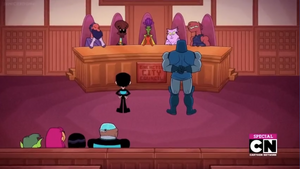 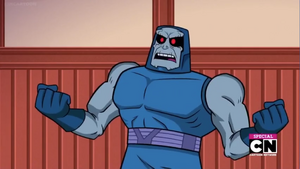 Darkseid asking for a legal permit to destroy the Earth 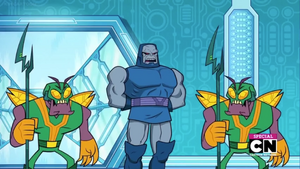 Darkswid and his moth minions