Expand his rule across the galaxy and the universe.

Uxas, better known as Darkseid, is the overarching antagonist of the DC animated series Young Justice. He is the enemy of the inhabitants of New Genesis and is the partner of Vandal Savage. He seeks to conquer the universe.

He is voiced by Michael Leon Wooley who also voiced the same character in Batman: The Brave and the Bold and Injustice 2.

Darkseid is ambitious in his goals of conquering the galaxy and would use his armada to wage war on worlds in order to conquer them. Despite his ruthless actions, Darkseid is open to allying with Vandal Savage when he saw a person of equal strength and opportunity. He is willing to partner with him to take over the galaxy until the day the two will clash for ultimate power. In most appearances Darkseid made, he is shown to be stoic and only speaks when it is needed. He is also willing to punish his own minions like Granny Goodness when he finds out that she was going against his goals.

Centuries ago, Darkseid has been trying to conquer the galaxy and would send his military to go to war against his enemies. As the leader of the new gods, Darkseid often got into conflicts with the people of New Genesis. The world of Apokolips would conduct torture and slavery and was in favor of the obtaining the Anti-Life Equation.

At one point in time, Darkseid sought to take over the Earth by having his military go to war with the people of Earth during the 13th Century. However, Vandal Savage under the name of Genghis Khan at the time and his two sons, ended the war despite losing miserably by impressing him with his genetic gifts and agreed to a partnership with Darkseid so that the two can take over the galaxy. They agreed that when the time came, they would also fight against each other for supreme control over the galaxy.

Darkseid continues his reign in Apokolips and seeks out individuals with the meta-genes. He continues his war against the people of New Genesis and the acquisition of the Anti-Life Equation. Darkseid and Vandal Savage would meet up to continue their partnership.

When an alien armada attempts to take over the Solar System, Vandal Savage contacts Darkseid for assistance against the enemy and was able to stop them. Darkseid continues to moderate the activities of Apokolips and their expansion across the galaxy. One of his minions, Granny Goodness, manage to get hold of the Anti-Life Equation for herself from kidnapping, torturing, and brainwashing Violet with the motherbox. Vandal Savage was against Granny Goodness's rise to power and helps the Team and the Justice League take her down. Granny Goodness tells Darkseid that it was Vandal Savage that got in the way of their plans. After getting into an argument with Savage, Darkseid and Savage came to a resolution when they found out that Granny Goodness was going against Darkseid and he had her tortured by Desaad as punishment. Despite the setback, Darkseid and Vandal Savage continued their partnership. 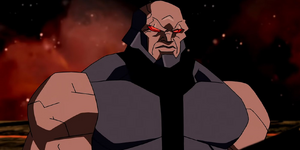 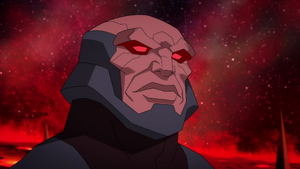 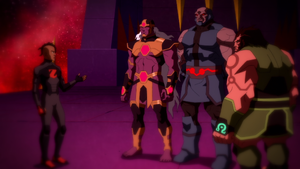 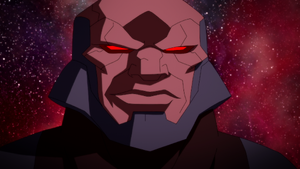 Darkseid looked at the new Female Furies with satisfaction.