Very High Speed
Dexterity
Low level superhuman durability
Superhuman Energy (Since he never gets tired and continues to fight in a beastly way.)
Incredible tolerance to pain (despite having very low qualities due to its very fatness and is even capable of having an incredible tolerance to internal pain from the very poor digestion it. However, after the battle, he was still able to keep fighting after taking so many hits from Nick. Her cause of death was that she herself slipped and choked on vomit.)
Skills with a giant spork to fight
Partial-regeneration (Only if she eat the food what have around)
Mastery of Intimidation
Fighting skills
Blade Throwing
Scooter Skills
Throwing Dishes
Slippery Vomiting (It makes anyone who passe on the vomit slip, serving as an advantage a she)

Eating, throwing up, and eating more.

Killing those who eat her food.

Keep the food to herself.

Darlene Fleischermacher is one of the bosses or psychopaths featured in the 2013 video game Dead Rising 3. She is also an optional boss featured in the main mode, first encountered in Chapter 3 in Ingleton at Uncle Billy's Buffet in side quest All You Can Eat Eat. She is a professional competitor eater of food competitions, who, due to obesity, has to move with a mobility scooter. Darlene sees the zombie outbreak as a fantastic opportunity to eat what she loves without restriction, so she locks herself into the Uncle Billy's Buffet in Ingleton to eat in peace and is ready to kill any survivors who try to touch or approach her food supplies. Darlene's anger is also aided by the fact that she is unable to eat everything at once. Darlene is also one of the psychopaths who carries one of the Seven Deadly Sins. Darlene's sin is Gluttony. She was voiced by Misty Lee, who also voiced the Ninth Sister in Star Wars: Jedi Fallen Order.

Jamie calls Nick telling him that he has spotted a survivor trying to open the kitchen door at Uncle Billy's Buffet and looks very desperate. Nick Ramos heads to Ingleton and heads towards the Buffet. Upon entering, Nick sees the surviving man trying desperately to open the door to the buffet kitchen. Nick talks to him, and the survivor immediately replies quietly that there is food in the kitchen and he'd better be quiet. Hearing the tone, Nick suspects that there are zombies in the buffet and the survivor replies that there is something much worse inside. Unfortunately, Nick slips and falls into a pool of vomit, which immediately alarms Darlene. The woman comes around the corner eating a turkey drumstick, ordering them to stay away from her food. Nick says there is enough food for everyone, but Darlene replies that all the food in this buffet is hers because she is fed up with diets. The survivor ignores her words and approaches the smorgasbord, prompting Darlene to show her abilities: the woman quickly gobbles up mountains of food and then vomits what she ate straight onto the two men. However, this does not discourage the survivor, who decides to continue scooping food. This enrages Darlene, who throws plates at him and screaming to leave her food alone and pulls out a huge fork. She hits him brutally and repeatedly into his chest which kills him in a matter of seconds. After killing a survivor, Darlene tells him that he had it coming for appropriating someone else's worth. Shocked, Nick tells Darlene that she had no right to kill him because he was only hungry and she had already eaten enough. This drives Darlene into an unbridled rage because she figured Nick called her fat and decided to kill him.

After the fight, the defeated Darlene begins to complain about the great stomachache caused by the fight with Nick, accusing the mechanic of indigestion. Darlene tries to make another charge at Nick to clear her stomach, but her scooter slips on a puddle of her own vomit and falls over. Darlene, lying on her back, begins to vomit and her body weight and scooter prevent her from getting up, causing Darlene to die choking on her own vomit to which Nick looks at the event with a little disgust. 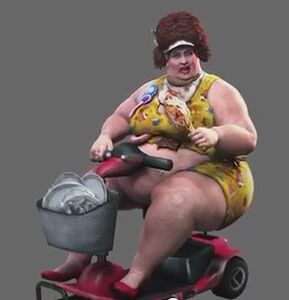 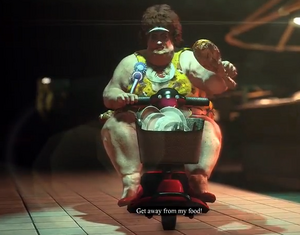 Darlene Fleischermacher in the buffet. 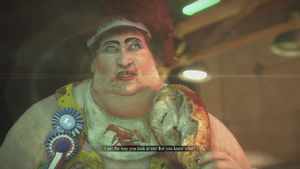 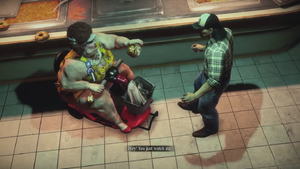 Darlene warning the survivor not to touch her food. 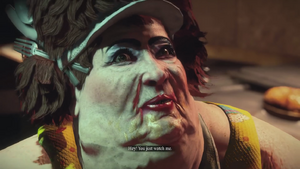 Darlene ready to show Nick and the survivor what she can do. 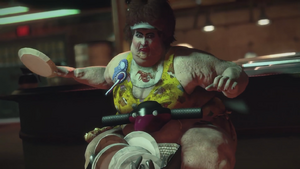 Darlene throwing the plates at the survivor. 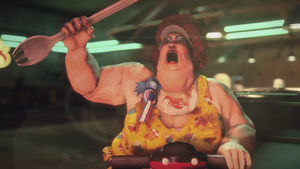 Darlene Fleischermacher about to kill the survivor. 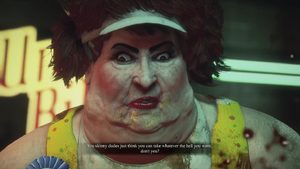 Darlene looking at the corpse of killed survivor. 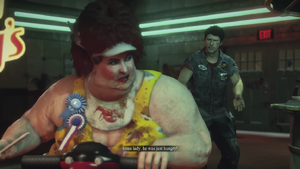 Nick Ramos is shocked by what Darlene did. 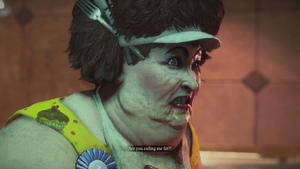 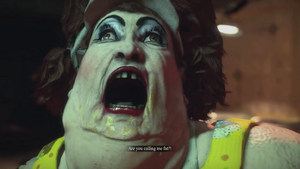 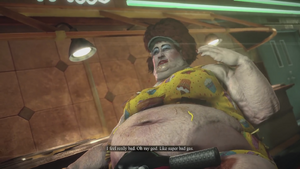 Darlene after the fight with Nick. 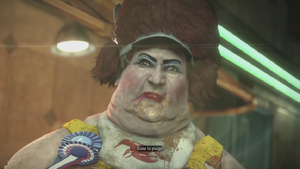 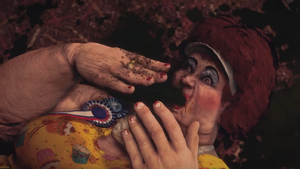 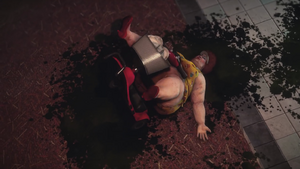 Darlene lying on her back. 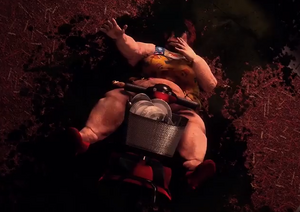 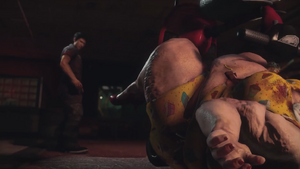 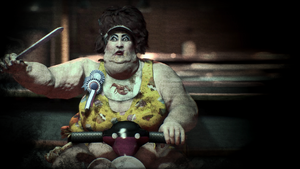 Darlene Fleischermacher as the Gluttonous Psychopath. 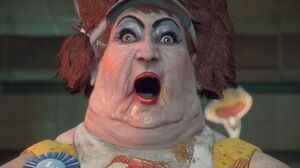