Making out with Buddy

Pull off the bank heist.

Monica Costello, also known as Darling, is a supporting antagonist of the 2017 action/crime film Baby Driver.

She was portrayed by Eiza Gonzalez, who also portrayed Maia Simmons in Godzilla vs. Kong, Santánico Pandemónium in the From Dusk Til Dawn: The Series, and Fran in I Care a Lot.

A bank robber working for the mysterious Doc, Darling is first seen robbing a bank with her husband Buddy and Griff before they escape in a car driven by their gateway driver and the protagonist Baby. Back at the hideout, Darling defends Baby as Griff insults him over his quietness. She and Buddy then leave to celebrate their successful heist with dinner.

Darling and Buddy seen again when Baby is brought in for another heist, accompanied by the high-strung and unpredictable Bats. The crew attempts to buy weapons from an arms dealer, but the deal goes sideways when Bats, recognizing the main arms dealer is a policeman in disguise, violently shoots the arms dealer and his crew. Darling is wounded in the fight, angering Buddy. The four then reconvene at Bo's Diner, where she, Buddy and Bats get into an argument and unknowingly meet Baby's girlfriend, a waitress named Debora.

Back at the hideout, Doc reveals that the policemen the crew shot were on his payroll, but Bats and Buddy lie that they shot first. Bats discovers that Baby has been recording the crew's conversations and prevents Baby from escaping to meet Debora. Learning that he is only making mixtapes, Darling laughs in amusement, but Bats discovers that Debora and Baby are an item.

The next day, Darling, Buddy, Bats and Baby proceed with the heist. After Bats kills a security guard at the Atlanta City post office, Baby rams the car into a rebar which kills Bats. Baby then runs away searching for another car leaving Buddy and Darling to shoot the pursuing police.

Baby accidentally rams into Buddy and Darling at a parking lot and police surround them. Darling is fatally shot, resulting in Buddy seeking vengeance. 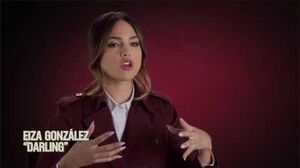