Darnell is a major antagonist as well as the deuteragonist of the Pico series. A pyromaniac who has an obsession for fire and explosives, he stars in his flash animation called Darnell Plays With Fire and is friends with Pico and Nene.

Darnell is a very trigger-happy pyromaniac, taking great interest in violence and destruction - until he is on the receiving end. He is often seen with some sort of weapon, such as a knife or uzi.

He is also a genius as well, according to Pico's World, he has an IQ of 241, which is classed as "gifted" intelligence, and he used this to lie about having only 5 years left to live so it would boost his chances of becoming class president, make others look away from his wrongdoings, and create bombs of his own.

Darnell is also sadistic as well, since he doesn't show any remorse, guilt, or shame after murdering over hundreds of firefighters and passengers during "Darnell Plays With Fire", instead, he just shed a tear of joy seeing them die.

Not much is known about his backstory nor background, however, it is suggested that his parents are divorced, and he managed to start a presidential campaign at Elite High School before the shooting.

Although he isn't physically seen in "Pico's School", he has a poster promoting his own presidential campaign which can be found in the hallways. It displays a message stating "I only have 5 years left to live!", next to an image of him with a sad expression (shedding a tear). He is also mentioned by Pico if he tries to leave the building, stating that "they're just lucky Darnell never started a fire in here."

After another confrontation with the Ghettobots on the school playground, Darnell and Pico leave the school, with Darnell instructing Pico to take the train to West Philly so he could "find out what's up". The demo abruptly ends with Pico saying he should head to Darnell's house, as nothing happens when Pico gets there. While Pico is playing his DJ Kit, Darnell stands on a floor which shows two burnt animal traces, implying Darnell has murdered them before.

Darnell appears as a background character of the fifth "week", "Red Snow", there is also a sneak peek of an upcoming update for Friday Night Funkin' confirming Darnell as either an opponent or major character, since he is seen fighting Pico.[1]

Darnell's presidential campaign poster reappears, the only differences now are that he has a very happy expression and said poster displays the message "Integriy. Honesty. Ingenuity.".

Darnell in Pico VS Bear DX. 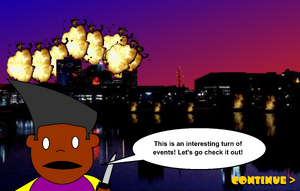 Darnell telling the viewers that he's ecstatic to see the 288 firefighters die in the 9 fire departments, which he planted bombs inside. 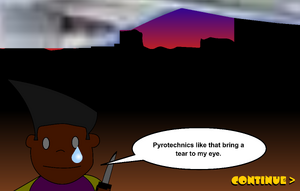 Darnell shedding a tear of joy to the viewers after seeing many passengers die inside the crashing airplane.

Darnell with an uzi. 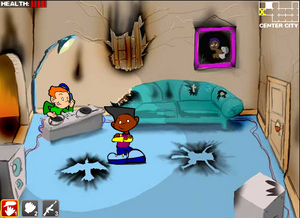 Darnell standing on a floor of two burnt animal traces (an unused background for Pico 2). 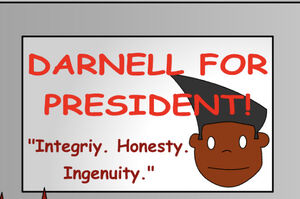