Master of Lancer of Black

Darnic Prestone Yggdmillennia is the Black Faction's leader and the central antagonist of Fate/Apocrypha, serving as the main antagonist in the first half.

Darnic later made an appearance in Fate/Grand Order as the main antagonist of the Inheritance of Glory event, which was connected to Fate/Apocrypha and happened right after its main events.

He is voiced by Nobuyuki Hiyama in Japanese and Ben Diskin in English.

Immoral, devilish and ambitious, Darnic is a cunning and treacherous manipulator who shows no qualm in manipulating and betraying others in order to reac his goal. He is also the main threat towards the existence of the Yggdmillennia homunculus, whom Darnic and his clan used as their tool.

Darnic wants the Grail to open a path to the Root in order to secure the Yggdmillenia clan's prosperity, stemming from a prophecy from the Clock Tower that foretold their decline. To do this, he participated in the Fuyuki Holy Grail War, sided with the Nazis, killed all his comrades, began eating souls to prolong his own life, and eventually betrayed and possessed his own Servant, all for making sure the prophecy wouldn't come true.

In spite of being a rather infamous mentor in the Association, Darnic's true strength never lie in education, but rather his political skills. Known as a first rate swindler, Darnic worked hard to keep his clan from falling into trouble. Although deceit is common within the Association, Darnic took the deceit up to eleven by utilizing his extraordinary political skills to manipulate and deceive both those who trusted him and even those who distrusted him, betraying and double-crossing all who stood in his path.

Darnic also achived an unexpected by-product of the alteration process, which made it possible to summon not only pure Heroics Spirits as Servants, but also "those who only have the aspect of a Heroic Spirit". In his progress of returning his family back to his glory and preparing to start the War of Great Holy Grail, Darnic worked hard over time to prepare the Greater Grail for his clan's own use, putting all events in order while discreetly avoiding any suspicion within sixty years.

However, in spite of his seemingly flawless manipulation, Darnic did accidentally let out information regarding the basis of the ritual to spread, which caused imitation rituals to spread throughout the world. Throughout years, Darnic regarded that as his only failure, and he managed to avoid detection for 70 years.

Nevertheless, Darnic is not pure evil. Despite his cruelty, it was undeniable that Darnic cares about his clan a lot and all efforts he makes, no matter how treacherous and cruel they seemed, are for the sake of his family to prosper. He also shows protective attitude towards Fiore, who he sees as his ideal heir. In Fate/Grand Order, he was able to move on once his condemned spirit was defeated, when the freed Vlad III persuaded him that his dream was no longer meaningful.

Eighty years before the Great Holy Grail War, Darnic had been decorated with a brilliant debut as an up-and-coming young magus. One day, he had suddenly obtained a marriage proposal to a clan of long lineage, which stood amongst the aristocratic Lords of the Clock Tower. However, at that very instant, Yggdmillennia was cut off from their dream of rising to the ranks of the Lords due to their polluted and impure blood linage, no longer maintaining itself past the fifth generation. Even if they overcame ruin past the fifth generation, the label that had been once slapped on them would never come off.

The disgrace had affected Darnic's life and made the clan he was about to marry disowned him, since the latter was a pragmatic clan that didn't like risks. In their point of view, Darnic immediately became an outsider that had to be excluded. Even his future brother-in-law and his fiancee, who were friendly to Darnic, left him for good. This contributed greatly to Darnic's ammoral ambition, and it only got strengthen after he learned a prophecy about the fateful downfall of his family in the future.

Showing no decision to give in, Darnic was determined to save his family even through betrayal and double-crossing. He later joined the Mage's Association like the rest of the clan. Gradually, Darnic climbed up the political ladder within the Association as a wish that would never be granted. He attained the highest rank of Grand and became known as the Eight-Forked Tongue, he was a second-class instructor in elemental conversion in the Association. Nevertheless, his students displayed unfavorable opinions to him.

Sixty years ago before the Great Holy Grail War, during World War II, Darnic searched for a path to reach the Root and he coincidently learned about the Holy Grail War in Fuyuki City. Darnic also discovered he had the unexpected fortune of finding a path that lead to the Greater Grail from a hole he had happened to fall into.

Knowing the Nazi Germany were interested in the occult, Darnic enticed the Nazis with skillful words. Eventually, Darnic persuaded Adolf Hitler himself to directly ordered huge military force for him. Since no one would expect a German army to be sent to an allied country like Japan, Darnic successfully obtained the power of this army and participated in Fuyuki's Third Holy Grail War as a master.

During the Third Holy Grail War, the situation had turned extremely chaotic due to an act of foul play committed by of Einzberns, which broke the war's rules and benefited Darnic to bring their defeat. During the battle, Darnic's servant Lancer, true name Fionn, fought to the death against the Einzern's servant Ruler, true name Shirou Kotomine.

The Third Holy Grail War concluded with no definite victor, but it served as a factor of Darnic's rise towards power. The exhausted Einzbern, Tohsaka and Makiri families had possessed no means by then to stop Darnic and the Nazi Germany. With the assistance of the Nazi Party army, Darnic found the location of the Greater Grail and plundered it.

However, as the Greater Grail was about to be transported to Germany, Darnic betrayed the Nazis and intentionally arranged for the transport, carrying the Greater Grail to pass through Trifas on the way to Germany. After his goal was achieved, Darnic killed of all the magi and soldiers whom he had fought alongside with in order to silence them on the disappearance of the Greater Grail.

After the Third Holy Grail War

Following that were days of research and politics. Outwardly towards the Association, Darnic feigned to have the Yggdmillennia clan content itself with the duty of being a receptacle for drop-out magi. He altered the Greater Grail little by little to adapt it to Trifas.

Three months before the Holy Grail War, Darnic put his plans into actions, seceding from the Association to form their own group based around their family. Just two months before the start of the War of Great Holy Grail, Darnic used his unparallelled strength within Romania to summon Vlad the Impaler as the Lancer of Black, but he started pledging loyalty to his Servant rather than commanding him.

Betraying the Mage's Association, both Darnic and Vlad intercepted a force from the Association, but one managed to start the reserve system on the Greater Grail, allowing for a team of Servants to oppose them. Darnic was never bothered as, while it had been unforeseen, he was prepared for such an eventuality when facing the Association.

At the beginning of the Great Holy Grail War, when sixty years had passed since the Third Holy Grail War, Darnic was playing chess with Avicebron, also known as the Caster of Black. As he recollected his past and ambition, Darnic realized that his culmination of over six decades of work has come to fruition.

Later, Darnic start ruminating in front of the plundered Greater Grail, before he gathered his clan and Vlad III to participate in multiple summoning rituals succeeded in front of him. After the ritual, the Black Faction successfully gained the remaining four Servants as a result - Frankenstein, Astolfo, Charion and Siegfield - as the Berserker of Black, the Rider of Black, the Archer of Black and the Saber of Black, respecitively.

Pleased with finally having the means to light the beacon of rebellion against the Association, Darnic showed no hard feelings with the unexpected Red Faction of Servants and was confident over the Black Faction's strength.

In Fate/Grand Order, Darnic is the main villain of the "Inheritance of Glory" event. Because of his fusion with Vlad III, upon death his soul was brought into the Grail alongside Vlad's but unable to be converted into energy because he was not a Servant. Several years after the events of Apocrypha the remnant of Darnic begins trying to usurp control of the Greater Grail from its new administrator, Sieg.

After his reveal as the mastermind, Darnic eventually fused himself with the Great Holy Grail, but is defeated by Ritsuka with the help of Sieg and nearly every Heroic Spirits (bar Vlad III) from both the Red and Black Factions all together. After his defeat, Darnic is mortally wounded by Vlad III, who is freed from Darnic's control. Darnic accepts his demise by Vlad's spear after the vampire lord tells him that his dreams were admirable but ultimately something to let go of, with Darnic deciding to let go of his dream and finally rest. 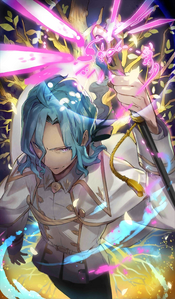 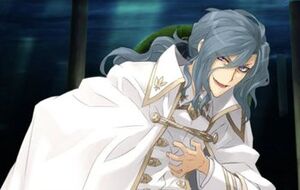 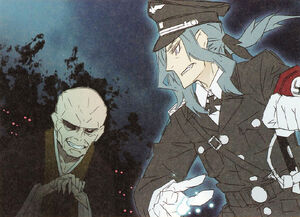 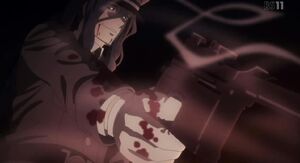 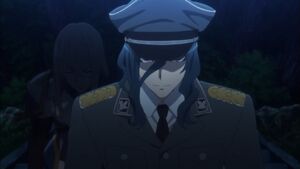 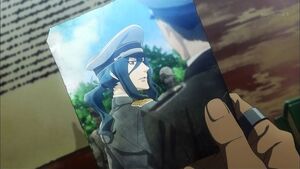 Darnic concealing his treacherous plan in front of Vlad III 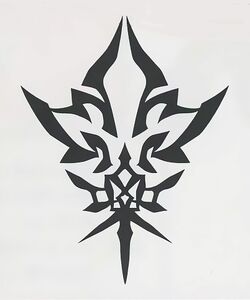