Nihilistic Doppelganger
Darquesse (real name: Stephanie Edgley and taken name: Valkyrie Cain) is the overall main antagonists of the Skulduggery Pleasant series .Like Lord Vile, she is split personality of Valkyrie. She awakens in Valkyrie's mind not long after being able to access the power granted by her true name. The prophecy states that she will destroy the world.

Originally Darquesse had black hair and wore black protective boots, trousers, shirt and jacket. When she took over Valkyrie forever she wore clothing similar to The Bride of Bloodtears saying that she looks like a 'psychotic belly dancer' this got burned when she saved China, the then donned clothing made of shadow which went from her feet to her jawline' when she possessed Valkyrie Cain's reflection she had the same physical look but her clothes (whilst they looked the same as her original black clothing) were crimson red.

Darquesse first shows up when Valkyrie is possessed by a Remnant. This only gave her a small sample of what she could become as she was in control of the Remnant rather than the Remnant controlling her. She kills a few Remnants before Skulduggery talks her into destroying the Remnant inside her. Turnig her back into Valkyrie Cain.

Darquesse's second appearance is when one of the Jitter Girls nearly kills Valkyrie, Darquesse emerges at the last second and sends all three Jitter Girls back into the box. She then flies to the sky but is talked back into becoming Valkyrie by Skulduggery. The third time she emerges is when Valkyrie and Melancholia are escaping from Lord Vile. Valkyrie asks Melancholia to try to kill her. Again at the last second Darquesse emerges and she fights Lord Vile. After Lord Vile snaps himself back into Skulduggery, he again manages to talk Darquesse back into Valkyrie.

Darquesse is forced to emerge in order to work with Lord Vile to kill Doran, Kitana, Sean and Argeddion. She gets sent into the alternative universe when earth is rused by Mevolent. The two battle, Mevolent nearly kills Darquesse but is stopped when she hits him with a horse. After travelling back to her own universe she kills Doran, Kitana and Sean but Argeddion resurrects them. He accidentlyly kills his alternative self and gives up. Lord Vile uses a tapping ryhthm to snap back into Skulduggery and uses sigils to turn Darquesse back into Valkyrie

Darquesse conflicts with Valkyrie's thoughts, and as they are escaping, Darquesse tricks Valkyrie into taking the wrong turn. Instead of escaping, she is stuck in a large room surrounded by hundreds of Brides of Blood Tears. They shoot beams of powerful energy, and Valkyrie's leg is blown off. Darquesse remarks that she can help. Valkyrie then loses an arm, and Darquesse tempts her again. Valkyrie loses another leg, and Darquesse manipulates her, telling her that if Valkyrie lets Darquesse take over, there is 'no more sharing'. Valkyrie gives in to Darquesse, and she obliterates all the the Brides. Fletcher and Skulduggery turn back to rescue her, but Darquesse flies off.

Darquesse is then seen next breaking through the ceiling of the Sanctuary to save China Sorrows' life. Skulduggery approaches her and she flings him aside. Darquesse places a small ball of light inside Ravel, cursing him with 23 hours of unbearable agony every day, with the pain heighting if his body gets used to it. China has the ability to kill Darquesse, but she hesitates, seeing Valkyrie's face. China touches her, and the heat is transferred to Darquesse, who heals China. Darquesse, still wearing the clothes of a Bride of Blood Tears, ignites, and her clothes burn and her Necromancer ring is destroyed. However, she cools herself, and the shadows tighten around her, becoming like a second skin. Skulduggery attempts to negotiate with her, but Darquesse says that Valkyrie is gone, not even a little voice in her head. She says that she does not want to kill her parents, she just wants to be alive. Darquesse then flies off.

Darquesse is first seen in a state of hibernation where Billy Ray Sanguine prepares to killer her. He decides not to as he doesn't wish to upset his fiancé, Tanith. Darquesse later wakes up and decides to release the Remnants to help her become smarter and more powerful. She and Tanith attack the Soul Catcher which held them and released them. She then talks to one Remnant that had possessd a scientist, after turning him into a chair for insulting her she then decides to steal a book called the hessian grimorie as the book would hold information that could help her gain god like abilities. When attempting to steal it she ran into Skulduggery and Stephaine Edgley's Reflection. The two kill Darquesse and accidentally trap Valkyrie's essence in a small Soul Catcher when the plan was to trap Darquesse, who now occupied Valkyrie's body alone. After she turns a man into a rubber duck she and Skulduggery and their friends travel to America where Darquesse fights a magic eating monster. She is then killed again so that Valkyrie can retake her body. Darquesse then possesses sorcerers with psychic powers until she kills Stephanie and possess her body. She then removes and consume Tanith's Remnant in order to get her information She then travels to Mevolent's universe to retrieve Ravel who had been sent there to attract Darquesse. She then fights Mevolent, Vengeance and Vile but is easily defeated, forcing her to go back to her own universe. She then attacks Roarhaven to kill Ravel, after fighting and quickly destroying an army made up of Vampires, various sorcerers and the Remnants, she and Valkyrie then face off to allow three psychic sorcerers to hypnotises Darquesse into thinking she has already burned all reality causing her to travel to the universe occupied by the Faceless Ones. It is unknown if she is still alive, but it is unlikely as Skulduggery said that she thought she was more powerful than she actually was due to the hallucinations.

As Darquesse, Valkyrie's personality undergoes a drastic and dark transformation. While still retaining her core behavior and principals (witty, sarcastic, frequently joking and bantering in life-or-death situations) as Darquesse is simply a darker version of her and not a separate entity, they are greatly twisted. She retains her witty and sarcastic personality, but it becomes cruel and malicious rather than playful. She relishes in causing and feeling pain and violence, and is constantly seeking opponents who can actually challenge her. However, it has been noted that Darquesse is not inherently evil - simply cold, uncaring, and above all curious in regards to her abilities and their limits. She is willing to ally herself with those who would usually be opposed to her, valuing self-preservation above all else. 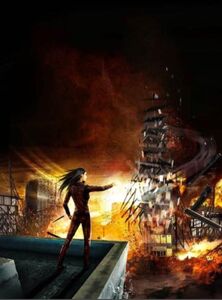 Darquesse destroys a building using telekinesis.
Add a photo to this gallery
Retrieved from "https://villains.fandom.com/wiki/Darquesse?oldid=3701180"
Community content is available under CC-BY-SA unless otherwise noted.