Save his own life by kidnapping heart donors and forcing them to transplant.

Darren Cross is a villain from the Marvel Comics. He later becomes Yellowjacket and the archenemy of the second Ant-Man, Scott Lang.

Darren Cross is a millionaire and the founder of a successful corporation, which rivals its top competitors. Cross was diagnosed with a heart condition due to overwork, and had to use an experimental nucleorganic pacemaker in order to save his life. The pacemaker was a success but enhanced Cross's circulatory system, mutating his body and giving him superhuman abilities. With a side effect that overuse causes the burning out of his heart, Cross went through various heart transplants, which led him to capture surgeon Dr. Erica Sondheim to replace his heart and to abduct "donors" from the slums. This attracted the attention of the second Ant-Man looking for Sondheim in order to save his own daughter's life. The resulting battle with Ant-Man burned out Cross's heart, as Sondheim had reimplanted his old, worn-out heart prior to Ant-Man crashing the surgery.

After his death, the family company created by Darren had been controlled by his cousin William Cross, and later his son Augustine Cross.

Darren's body is later revealed to have been kept in a cryogenic state as Augustine was obsessed with bringing Darren back to life and eventually forces Dr. Sondheim to help. Enlisting Crossfire's assistance, Augustine had orchestrated Cassie Lang's capture as the girl's heart is required to withstand the unique conditions when transplanted into Darren. While infiltrating Cross's company to rescue Cassie, Ant-Man came across his restored nemesis. Darren engaged in combat against Ant-Man while Ant-Man buys time for Sondheim to transplant another heart to Cassie. Darren is ultimately forced to flee with his son when the Pym Particles now in his body caused him to shrink down.

As part of the All-New, All-Different Marvel, Darren Cross was later approached by Power Broker to demonstrate his latest "Hench" App by hiring Whirlwind to kill Ant-Man. However, Cross was unwilling to give Power Broker the 1.2 billion dollars demanded for investment in the Hench app, causing Power Broker to cancel the demo and cancel Whirlwind's assassination on Ant-Man.

Cross later represented his own company when he attended a meeting at the Universal Bank with Tiberius Stone of Alchemax, Wilson Fisk of Fisk Industries, Sebastian Shaw of Shaw Industries, Zeke Stane of Stane International, Frr'dox of Shi'ar Solutions Consolidated, and Wilhelmina Kensington of Kilgore Arms where they discussed Dario Agger's and Roxxon Energy Corporation's plans to exploit the Ten Realms of Asgard. Cross also saw the arrival of Exterminatrix of the Midas Foundation who knocked out Dario and declared herself a new member of their assembly.

In order to combat Ant-Man, Cross recruited Egghead to work for his company. Egghead helped Cross control his Pym Particle abilities with the Yellowjacket armor. Yellowjacket, Egghead and Crossfire attacked during his nemesis's trial in Cassie's place, but were engaged by Ant-Man, She-Hulk (Scott's defense attorney), Miss Thing, Grizzly, Machinesmith and Stinger. Yellowjacket is defeated by Stinger, which led to Peggy Rae's final approval of Scott's superhero life and Scott's acquittal in court.

During the "Opening Salvo" part of the Secret Empire storyline, Yellowjacket appears as a member of Helmut Zemo's Army of Evil. 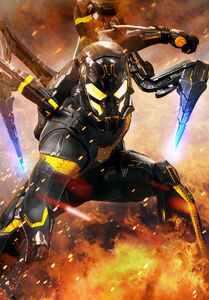 Yellowjacket appearing in the Ant-Man film.