Darren The Ancient Sleeper is a gigantic tree person/rock person that was summoned by Maja the Sky Witch in the episode "Something Big." He doesn't understand feelings, and appears to have a past connection with the Ancient Psychic Tandem War Elephant, who he calls "Ele."

Also in the episode "Something Big," Finn shoots off his right arm with the Ancient Psychic Tandem War Elephant and stabs his brain seed with a sword causing his head to explode. Darren is now deceased.

He was voiced by Alan Oppenheimer.

Darren is actually half rock person and half tree person. He seems to have some rock types attached to him, especially at his shoulder, left knee cap, and his hands. He also appears to have grass over his torso and his leg. Darren is classified as a tree person due to the fact that most of himself is made up of tree. His head is tree bark and appears to have roots as arms connecting to his rock hand. He also has legs made up of tree roots and a foot made of bark.

Due to his huge size, he has great strength. It is implied that anyone defeated by Darren is completely erased from existence, even disappearing from alternate universes. He can shoot a destructive laser from his mouth. He is able to open a portal to an alternate universe, through which he can summon a rain of eggs that hatch into an army of warriors known as "The Dragon's Teeth".

Upon being slain, he released a shower of "life sparkles" that revived the dead candy soldiers, although Root Beer Guy did not come back to life as his body was completely shattered, meaning that a corpse must be in a good enough condition in order to be revived by the sparkles. Finn was also seen sparkling after being hit by the wave of sparkles, although it is currently unknown if this has affected him in any way. 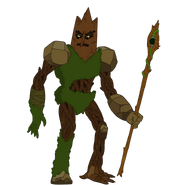 Retrieved from "https://villains.fandom.com/wiki/Darren_the_Ancient_Sleeper?oldid=4011349"
Community content is available under CC-BY-SA unless otherwise noted.