Tyrannical Parody
Darth Baker is the main antagonist of the Sesame Street short video, "Star S'mores", which is the parody of Star Wars.

In the clip, their goal is to save the Princess Parfaya, who got kidnapped by Darth Baker. Flan Solo (Cookie Monster) is very tempted to eat his partner, Chewie the Cookie. The mentors they met, Only-one Kenobi and Groda tried to have Flan Solo control himself not to eat Chewie, but all of these did not work. Luke Piewalker, Flan Solo and Chewie went in Darth Baker's lair. Darth Baker said to Luke Piewalker "I am your Father". Luke asked him about how to make Flan control himself. Darth Baker said "Pretend it is someone you won't eat". Flan pretand Chewie is his grandma. Princess Parfaya is finally saved.

It is likely that he tuned evil is because of fear, anger and hate. When he revealed to Luke that he is Luke's father, he told Flan the strategy of self-control. It is possible that the reason is because Darth Baker remembered his son. 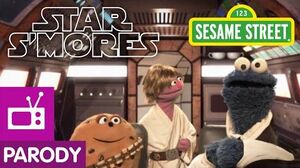