Mastery of manipulation and deception

Darth Jadus is a supporting antagonist in BioWare MMORPG Star Wars: The Old Republic. He was a powerful, enigmatic and dangerous Sith Lord who sought to plunge the Galaxy into chaos and from that rise up to rule. He appears several times in the Imperial Agent's story and serves as one of the Agent's greatest enemies, or possibly master.

Darth Jadus is one of the main antagonists of chapter 1 of the Imperial Agent Storyline and a possible ally in chapter 2 in Star Wars: The Old Republic.

Jadus had a great many power that led him to being referred to as the greatest Sith ever produced from Vitiate’s Empire. He had the ability to cloak himself with the Force, create Force Storms, teleport with the Force, control minds completely with the Force, and a plethora of other abilities. Though Jadus doesn’t use lightsabers often because his Force Powers are usually enough, he is an expert duelist and can use the Force to enhance his dueling skills. Perhaps his greatest feat is when he faked his death and teleported his entire flagship away with the Force then created his dominators and used his Force prowess to make them powerful Sith.

Little is known of Darth Jadus or who he is, with the Sith Lord being an enigma even to his peers. What is known is that he was second in power to only the Sith Emperor himself and also came to control Imperial Intelligence, exerting his influence over the organization. He also fathered a child who he turned into an apprentice, Darth Zhorrid, but was left disappointed with her and thus came to view her as an expendable failure that he felt nothing for. In fact, Jadus later planned to have her killed so he could reclaim his seat on the Dark Council.

Typically presenting himself as completely dispassionate, Jadus concerned himself little with the petty squabbles of his fellow Dark Councilors and instead pursued his own personal agenda. In truth Jadus planned to plunge the entire galaxy into chaos that would be devastating to both the Republic and the Sith, and from this Jadus would rise up to seize power for himself, in his own words uniting all of the Empire's citizens with fear. He also faked his death so as to better pursue his goals without intervention from the other Dark Councilors, he manipulated a terrorist network led by the Eagle to cover his plans.

The Imperial Agent known as Cipher-9 eventually came into conflict with Darth Jadus, who revealed that he had orchestrated his plans in such a way that no matter what choice the Imperial Agent made he would be victorious. Specifically, he had half the codes to his superwoman and Cipher-9 had the other half. If Cipher-9 refused to enter the codes, the weapons would fire randomly and kill millions. If Cipher-9 gave in and entered the codes, Jadus would have what he wanted at which point he would slay the Imperial Agent, who had no chance of besting Darth Jadus in a straight up fight. Jadus offered the Agent a place at his side in exchange for their cooperation, but whether or not Cipher-9 chose to join Jadus or try and stop him is up to the player. And though his plan was seemingly airtight, it was possible for Cipher-9 to convince Darth Jadus that his plan was doomed to failure, at which point he willingly surrendered, also making it clear to the Imperial Agent that he now both respected and despised him/her. Darth Jadus was then forced to flee.

Alternatively, Cipher-9 took Darth Jadus up on his offer and aided him in his plans, culminating in him allowing Darth Jadus to re-seize control of Imperial Intelligence and mold it in his image once again. 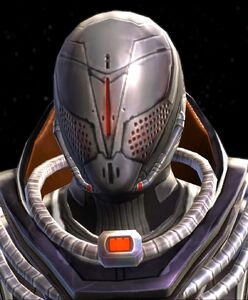 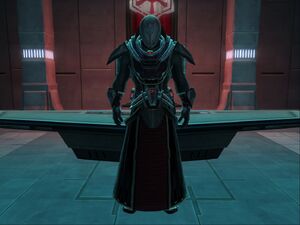 Darth Jadus as he appears in-game. 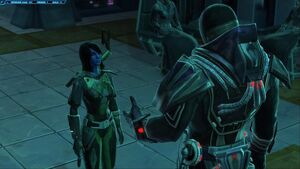 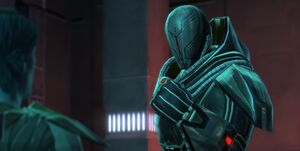