Connection to the Force
Lightsaber Duelling

Radaki was originally a member of the benevolent Jedi Order who became disillusioned with the Jedi Code and abandoned the light side, becoming a powerful Sith Lord called Darth Krall. He tamed the Nightmare Conjunction and participated in the Battle of Wasted Years. After his death, he was remembered as one of the Lost by the Jedi.

Born sometime before the formation of the Galactic Republic, Radaki was a Force-sensitive boy who was inducted into the Jedi Order at an early age. Like all Jedi, Radaki learned how to wield a lightsaber and how to harness the light side of the Force. Although he eventually became a Jedi Master, Radaki opted to leave the Jedi Order as he believed that Jedi should be allowed to keep their wealth and family ties upon being inducted into the Order.

At some point, Radaki became corrupted by the dark side of the Force and joined the Sith Order. As “Darth Krall,” he participated and emerged victorious in the Battle of Wasted Years and tamed the Nightmare Conjunction. Krall presumably later died at some point at the hands of his enemies or due to natural causes.

During the High Republic Era, when the Jedi and the Republic shined brightly throughout the galaxy, a Jedi Knight named Keeve Trennis began experiencing horrific visions featuring Darth Krall. The first nightmare came to Trennis while she was meditating in a Jedi temple. In the vision, Krall attacked the Jedi Knight in a dark forest and impaled her with his lightsaber. Later, while Trennis was battling Nihil raiders on the planet Chortose, she briefly hallucinated Darth Krall drawing his lightsaber against her.

After his death Darth Krall was remembered by the Jedi as one of the “Lost,” a name attributed to those few Jedi Masters that left the Order over the millennia. Busts of Radaki and the other members of the Lost were displayed in the Jedi Archives in the Jedi Grand Temple on Coruscant during the time of the Galactic Republic. Krall’s lightsaber was also kept in the Jedi Archives, albeit in a restricted section of dark side-related artefacts known as the Bogan Collection.

Decades before the fall of the Republic, Jedi Grand Master Yoda showed a group of Jedi Initiates the statues of the Lost during a lesson. He taught the younglings about Radaki's life and fall to the dark side. Ironically, one of those younglings by the name of Dooku would later join the ranks of the Lost and become a Sith Lord partially because he believed family ties should be kept, an idea that had been shared by Krall. 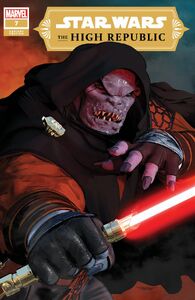 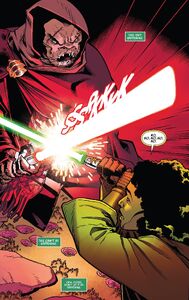 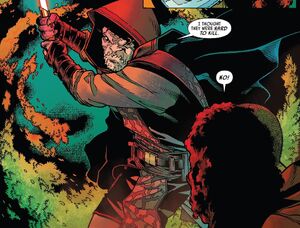