The Sith troopers are individuals strong in the Force, who were abducted by Darth Krayt shortly after birth and augmented through cybernetic implants. They were re-programmed into fanatically loyal servants of Darh Krayt.

Darth Krayt's Sith trooper project began decades before the One Sith took over the galaxy. Knowing that all his Sith followers would at some point seek his power, Krayt began the Sith trooper project to create an army that was both undefeatable and unquestioningly loyal. After Krayt's resurrection, he started implementing his Sith troopers and his Annihilator-class starfighters in his war. They were fused with robotics and cybernetic components from infancy. These components connected the Sith Troopers to their Annihilators. Another Sith Trooper mentioned that they don't tire.

The troops were housed in a secret location in the Valley of the Dark Lords on the Sith World of Korriban. To test their obedience, Krayt ordered one of the Sith troopers guarding the chambers to kill himself. The trooper immediately complied.

Soon afterward, Darth Krayt returned to Coruscant to seek revenge against Darth Wyyrlok. He was accompanied by Darth Talon and Darth Nihl as well as two of these troopers. During their march into the Temple of the Sith, Krayt's Sith troopers killed several renegade Sith supporting Wyyrlok with ease.

Months later, as the Sith Imperial assault against the Jedi Hidden Temple on Taivas ensued, and it seemed the Imperials would lose, Krayt sprung his trap, releasing his Sith Troopers on the battlefield. They tore through both the Imperials and the Jedi. Despite their power and ferocity, the Jedi continued to hold out against the Sith, culminating in an assault on the council chamber where T'ra Saa, director of the Jedi's side of the battle had resided. 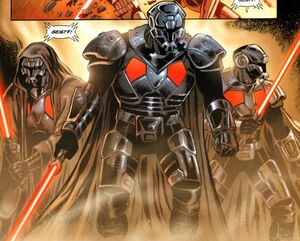 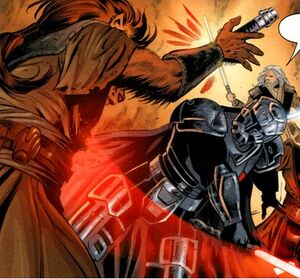 One of the Sith Troopers slaying a Jedi Master.