Darth Malgus is a major antagonist in Star Wars franchise. Malgus was a Human male Sith Lord of the Sith Empire during the Great Galactic War. He was born under the name Veradun within Imperial space, and raised by his adoptive father. While still young, Veradun killed a Twi'lek servant on his father's estate, revealing the dark will behind his sensitivity to the Force. The young boy was subsequently sent to the Sith Academy on the Imperial capital of Dromund Kaas, where he became a Sith Warrior and a successful commander of the Imperial Military.

Darth Malgus had a distinct personality among the Sith. He was a fierce frontline warrior who often utilized alien mercenaries to do his bidding even when they were considered to be unreliable by the Sith in his time. Because of his interactions with many alien species, Malgus learned many alien languages.

Malgus had a romantic relationship with an alien female named Eleena Daru, treating her not as a slave but like a wife. Interestingly, Malgus had an understanding with Daru that their private relationship should remain hidden from the strangers. He believed that his rivals may exploit him, if they found out about the true nature of their relationship. Only Daru was privileged to call Darth Malgus by his real name, Veradun, and that too in private.

Malgus's personality justified his reputation as a fierce frontline warrior. He believed that he was born to fight and the Sith Empire was the instrument through which he realized his purpose. To him, the cost of the war did not mattered regardless of how high it could be.

Malgus perceived the Force as a source of conflict. Upon questioning from his friend Daru, he pointed out that the Force has light side and dark side which supports his perception. The Jedi, in his opinion, understood the Force partially. He acknowledged that some of them were powerful in its use. However, he regarded the Jedi as fools.

Malgus did not tolerate failure at any cost. After he killed Jedi Master Kao Cen Darach and learned of Satele Shan and her comrades' escape, he felt disgusted with his Sith Master, Vindican for not assuring a total victory. Although he struck the wounded Pureblood Sith Lord down, he nonetheless savored their last victory together, which was of utmost significance. After the defeat on Alderaan, Malgus fell in to uncontrollable rage for a while, fought two Jedi regardless of his injuries, and killed them in an act of revenge before leaving.

As a confident individual, Malgus was brave and boldly entered the Jedi Temple for confrontation with the Jedi with only his friend Daru by his side. When the captured shuttle crashed through the Temple's main entrance and skidded along the walkway, Malgus held his position while the majority of the Jedi around him prepared to flee if necessary. When Jedi Master Ven Zallow remained stationary, Malgus acknowledged his lack of fear with a nod of respect. Malgus took joy in killing Republic soldiers, especially after a commando used heavy firepower against him during the Battle of Alderaan. When faced with a desire to slay someone, he was prepared to kill his own allies if no enemies remained just to satisfy his rage. In later years, Zallow has been recognized as Malgus's most notable kill.

Regardless of his contempt for the Jedi, Malgus was a man of principles. He was not accustomed to comforts and never drank wine. He always kept his promises. Jedi Knight Aryn Leneer wanted to avenge the death of her Jedi Master Ven Zallow, with whom she shared a powerful bond. She learned about the relationship between Malgus and Daru and wanted to exploit it. She decided to kill Daru to give Malgus a taste of the pain she felt because of his actions. However, Aryn controlled her emotions and let Daru live after encountering her in a Spaceport. Malgus also reached there and defeated Aryn in combat. But he spared her life in exchange of her sparing the life of Daru and gave her the option to leave Coruscant. Aryn was impressed but confused. While Aryn was leaving Coruscant, Malgus kept his promise and did not take advantage of her situation. However, Malgus realized his worst fears and his experience with Aryn changed him for good. He realized that Daru was his weakness just like the Jedi. He could no longer afford this weakness. Therefore, he killed his only friend and freed himself from the shackles of emotions.

On Korriban, Malgus saw a vision of the Galaxy in flames; the fall of a Galaxy-spanning government (the Republic). However, Malgus was also a critic of the policy matters of the Sith Empire. After the Treaty of Coruscant, he felt disgusted with the politics of the Sith Empire and felt that the Republic was not the only system that required cleansing. Malgus especially had disagreements with his Sith rival Lord Adraas on various matters and killed him.

Malgus desired reforms in the Sith Empire after the Treaty of Coruscant which earned him contempt from certain quarters. He was not interested in the backstabbing politics of the top-ranking Sith desiring seats on the Dark Council. However, he was reliable and preferred to lead military expeditions into the unexplored territories with the objective of increasing the influence of the Sith Empire as a whole.

Darth Malgus was phenomenally proficient in the use of the lightsaber. With just one lightsaber, he easily overwhelmed Satele Shan during their first fight, and she only survived due to Kao Cen Darach's frequent interventions. Later, during the Sacking of Coruscant, he massacred hundreds of Jedi Knights, Masters and Padawans. He later killed Jedi Master Ven Zallow, this has been regarded as his most famous kill.

In another event, during the retaking of Korriban, Malgus employed Jar'Kai to kill another powerful Jedi Master Kao Cen Darach regardless of the proficiency of the latter in the same fighting style who impaled his Sith Master, Vindican. Malgus's brute strength, rage, and clear focus, gave him advantage, and allowed him to perform overwhelming strikes to subdue Kao.

Malgus's extraordinary skill and efficiency in combat was down to the fact that he was, physically, enormously powerful and would use his incredible physical strength to amplify his lightsaber strikes to incalculable lengths. He would also call on his internal rage if he was facing an opponent one-to-one, and this rage would make him more terrifying and unpredictable to his opponent. This made his fighting style extremely aggressive and unbelievably dangerous to even the most formidable Jedi.

Malgus often performed acrobatics to increase his effectiveness in lightsaber combat. His speed was such that a normal human found it difficult to watch his movements in his duels.

Malgus was physically incredibly strong. In one instance, he grabbed the neck of a Jedi with a single hand, lifted him up from the ground, and throttled him to death. In another instance, he cracked the marble top of a table with a slam of his fist on it, outside the Chancellor's room. Later on, he killed Lord Adraas with bare hands. His arms were both extremely powerful, as - whilst carrying one lightsaber in each hand - when battling Kao Cen Darach, he was able to cut through huge objects with each hand, and then was capable of furiously attacking the Jedi Master and disarming him effortlessly, killing him in a matter of seconds. Later on, he used bare-handed/footed attacks whilst fihting in the Sacking of COruscant, and his landings from aerial attacks made craters in the floor.

Darth Malgus utilized a variety of Force powers during the Sacking of Coruscant to defeat many Jedi and Republic soldiers who stood in his path, including saber throw, Force push, choke, jump, speed and lightning. Malgus used his emotions, such as anger and distaste of others, to fuel his power of the dark side. Malgus demonstrated the skill and power to handle multiple opponents simultaneously without much effort. In one instance, Malgus unleashed a powerful blast of Force lightning and killed three Jedi with it.

Malgus also performed Force screams to make his hatred apparent to his opponents. During his raid of the Jedi Temple, Malgus unleashed power with an expression of his rage which shattered a nearby column of wall and send a rain of stone shards through the room when his friend Eleena Daru was struck down by his most powerful opponent in the region; Zallow. Malgus used this ability once again during his raid of the resting place of Adraas, making his extreme hatred for him clearly visible by leaving a trail of destruction around him with it during his advance towards his powerful Sith rival.

Malgus often used Force speed to augment his physical movements. When Malgus engaged Jedi Knight Ayrn Leener in a duel, an observer attempted to watch them but could not properly see their movements because of their immense speed. Later on, Malgus used this ability once again while he was rushing towards the hanger in a Spaceport to rescue Daru from a threat, leaving the troops accompanying him far behind.

Being strong in the Force, Malgus was proficent in the applications of telekinesis, allowing him to move and otherwise exert force on objects or people with the Force. Malgus could counter-push his opponents in the mid-air while they would jump towards him to knock then out in the process. He was also able to redirect two missiles fired at him on Alderaan before a third managed to hit him, leaving him disfigured, but otherwise unfazed. During the duel with Aryn, Malgus demonstrated the ability to hurl objects as missiles towards his opponent. Malgus could also perform Force grip and Force crush.

In Alderaan, a Zabrak Jedi used the Force to collapse two buildings on Malgus in an attempt to kill him. Malgus stood under the mountain of rubble composed of building parts made of duracrete and steel preventing it from crushing him beneath with the Force. Malgus controlled his anger and sharpened his power. He blew the rubble up and away from him, sending it crashing in adjacent buildings.

Malgus also performed Force wave when he attempted to disperse a large crowd gathered outside a Medical Facility in Coruscant to check on Daru. The blast shoved everything away from him in all directions, and bodies slammed in to each other, walls, and windows. The nearby Transport lurched, and all the doors of the Medical Facility broke loose and fell to the ground.

On Alderaan, Malgus also faced Jedi Master Satele Shan and her allies in single combat and tolerated heavy firepower and Force powers from his opponents which shattered large objects around him. He was seriously injured but he survived and felt no pain.

Malgus could also hide his presence in the Force. Interestingly, a Jedi in Alderaan used this ability to suppress his Force signature when he planned to ambush Malgus but it was not effective against him. Malgus still managed to sense his presence and foiled his plans.

Prior to duel with Adraas, Malgus became more powerful then ever before by eliminating his only source of weakness; Daru. Her death allowed Malgus to reach in such a mental state that he resided in the calm eye of a storm of hate. Power churned around him, within him. He did not feel as if he were drawing on the Force, using it. He felt as if he were the Force, as if he had merged with it. Within this state, Malgus became virtually unstoppable. 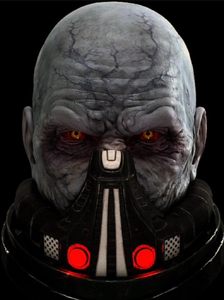 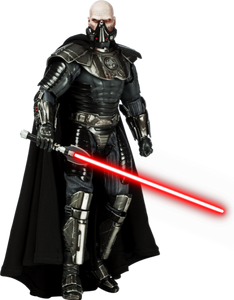 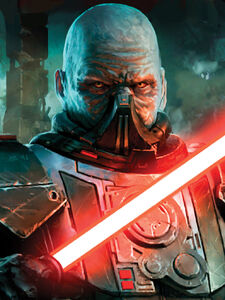 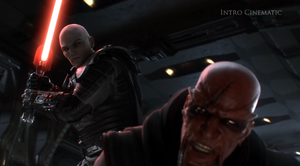 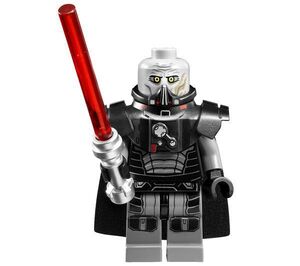 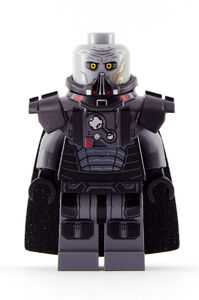 Darth Malgus as a Lego minifigure.
Add a photo to this gallery

Retrieved from "https://villains.fandom.com/wiki/Darth_Malgus?oldid=3491162"
Community content is available under CC-BY-SA unless otherwise noted.