He was a Human male Dark Lord of the Sith and a member of the Sith Empire's ruling Dark Council during the Great Galactic War, Cold War, and renewed conflict with the Galactic Republic. A fearsome warrior and stalwart defender of the Empire, Darth Marr was born in 3702 BBY and assumed a seat on the Dark Council in his early twenties, leading the Sith Empire as Head Dark Councillor in the absence of Emperor Vitiate, as well as the Military, as he drove back entire armies and halted Republic offensives during the Cold War. Marr led the Empire until he went on a mission with a being who would become known as the Outlander to find the Sith Emperor, but they found him leading the Eternal Empire. Facing his former master, Marr was vanquished by Vitiate when he refused to kneel before him.

He is voiced by Michael Harney.

Lord Marr had recovered the Sith Lightsaber of the ancient Dark Lord Tulak Hord and had used it as his own weapon shortly before his ascension to the Sith Empire's ruling Dark Council, a position that he achieved sometime around the beginning of the Great Galactic War with the Galactic Republic in 3,681 BBY.

By the end of the war in 3,653 BBY, Marr had trained an apprentice by the name of Darth Lachris to the rank of Sith Lord and was one of only seven remaining Councilors. He continued to strengthen Imperial defences and prepare for the inevitable conflict throughout the Cold War, distancing himself from the power plays and treachery that plagued the Council and weakened the Empire.

As war broke out with the Republic, Marr watched as the Dark Council's numbers dwindled thanks to both the enemy and internal feuding, and he assumed a leadership role alongside fellow Councilors Darth Mortis and Darth Ravage after the deaths of Darth Baras and Darth Decimus, the heads of the Spheres of Military Offense and Military Strategy, left him in sole command of the Imperial Military.

Later, the Sith Empire learned that Revan was alive and planned to reawaken Emperor Vitiate. Unable to risk the possibility of the Emperor returning, having recently learned of his former leader's plans to extinguish all life in the galaxy, Marr created a temporary truce between Republic forces under command of Satele Shan and the Grand Master to stop the Order of Revan from bringing the Emperor back to physical form. However, despite successfully defeating Revan, the Emperor was successfully reawakened after feeding off the death and chaos caused by their war and departed into the galaxy.

Soon after, Marr led a Republic and Imperial joint fleet into Wild Space in search of both the former Emperor Vitiate and the unidentified perpetrators who had raided several planets of the two major galactic powers and then retreated back into unknown space. However, the fleet was attacked and destroyed by the Eternal Empire and Darth Marr and the Outlander were held captive by Prince Arcann and taken to Zakuul.

There, Marr and the Outlander were brought before the Eternal Empire's leader, Emperor Valkorion, who Marr quickly deduced was just another identity of Vitiate. When asked to kneel before Valkorion and join him, Marr bluntly refused to serve him again and attacks several of the Emperor's guards before being hit with a powerful blast of Force Lightning from Valkorion, killing him. Despite his physical death, however, Marr returned as a Force ghost and began communing with Satele Shan five years later.

Marr was driven by a fierce dedication to warfare, one that bordered on zealotry. He believed that conflict was the only way that life evolved and grew stronger, and Marr's personal view was that death was inevitable; believing only cowards tried to avoid that which was a necessity. Darth Marr's power in the dark side gradually stripped him of emotion over the decades, leaving the man with a fraction of his humanity but a strong desire to ensure that the Empire survived.

Marr understood that the Empire needed to evolve in order to survive, and he was frustrated by his fellow Councilors' bigotry and the way that they clung to the old anti-alien philosophies even after the Empire began opening its ranks to alien species following the defeat of the traitorous Darth Malgus at the Battle of Ilum. Marr was also aware that the continuing of backstabbing and infighting would destroy the Empire and tried to keep it under control in the absence of the Emperor. Marr was disappointed when Karrid chose to destroy Gravus for her own ends, which made her a Dark Councilor, but made the Empire more vulnerable.

Darth Marr was a remarkably powerful practitioner of the dark side he was one of the most powerful Sith of his era, only behind Darth Jadus and the Sith Emperor (And eventually Darth Nox); his strength was such that he ascended to a seat on the Dark Council while still in his early twenties, and he was able to maintain his position over the next forty years while the tenure of some Councilors lasted mere weeks. He wielded a single red-bladed lightsaber in combat while protected by his specialized suit of Sith battle armor, and his prowess in battle was such that he had a reputation for routing entire armies. Darth Marr was also skilled in using Force lightning, as he was able to summon a crackling storm of lightning at a moment's notice in order to threaten the impudent Teneb Kel. 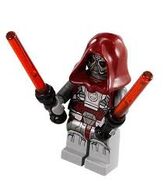