Leader of the Order of Revan
Dark Lord of the Sith

Maintaining loyalty among his followers.

Destroy the Galactic Republic and the Sith Empire and bring permanent order to the galaxy (failed).

Revan, renowned as the Revanchist, dreaded as the Sith Lord Darth Revan, and honored as the Prodigal Knight, is one of the central protagonists of the Star Wars Old Republic era.

He was an eminent Jedi Knight turned Dark Lord of the Sith until, stripped of his true persona, he returned to the crumbling Jedi Order and helped defeat the Sith Empire he had established. A human male, and acknowledged as a very gifted and powerful Force-sensitive pupil, he was trained as a Padawan by Kreia and a number of other Jedi Masters, both on Coruscant and at the Jedi Enclave on Dantooine.

Revan has always possessed incredible determination and intelligence, constantly seeking new ways of accomplishing what he sees as right. The Mandalorian wars have given Revan a very cold attitude that makes it so he will seek victory despite the cost. However, he prefers avoiding needless carnage, which is why he built HK-47. Nevertheless, he was utterly ruthless as a Sith and he also was highly dedicated to Sith ideals and believes power is everything, ignoring any ideals of mercy or loyalty. His ideals helped influence Darth Bane to create the Rule of Two as he believed that a Sith Master should have one apprentice to avoid being overcome by multiple lesser followers.

Revan favors the idea of turning his former enemies to his side through manipulation and corruption. However, he still has a sense of humor, as he was amused when HK-47 called Malak a "meatbag" and programmed him to refer to all organics as such. Revan has incredible will, which was what allowed him to endure centuries of torture from Vitiate, though he was not unscarred. His mind started to become twisted between the light and dark sides and after his light side left him, Revan was completely fueled by anger and hate. He sought to destroy his former tormentor forever, but while the dark Revan possessed his strength, he lacked his former wisdom and his mind was clouded by his malice.

Revan is extremely powerful in the ways of the Force, masterful in combat with a lightsaber. He possesses high agility, speed, and strength boosted by the Force that he uses in his fighting style. Revan mostly uses one lightsaber, but wields two as dark Revan, both his red Sith one and his original purple one. Revan is also an extremely cunning and able military commander, an expert with his tactics and strategies. He is respected by several cultures as the epitome of a warrior and commander, as well as very charismatic in recruiting allies. Revan is fluent in several languages, mechanically minded, skilled at constructing droids, and a talented pilot. Revan is extremely powerful with the Force, and a true master of the Dark Side as a Sith Lord.

Revan can use telekinesis, which he often uses to hurl heavy objects in battle, as well as crush and choke enemies, guide his lightsaber when he throws it and has even wielded two more lightsabers telekinetically. Revan can also influence other's minds and take knowledge from them. He was also skilled in Force sense, allowing him to sense others, their emotions, and even the future, making it so he often has visions. Revan can use the Force to heal his wounds and resist poison and drugs. He can also use powerful Force lightning and devastating Force storms. Revan can use the Force for various defensive purposes, even able to absorb energy and redirect it back at his foe. 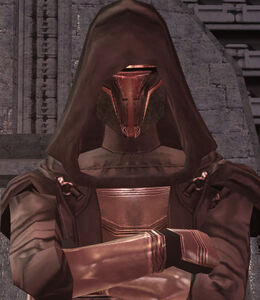 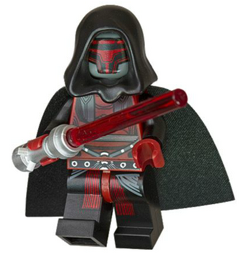 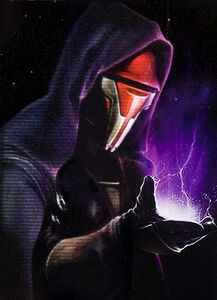 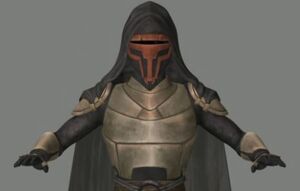 Darth Revan was planned to make an appearance in the Star Wars: The Clone Wars television series. 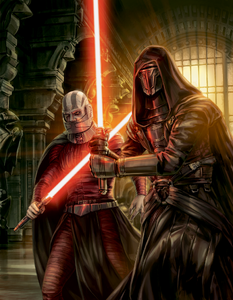 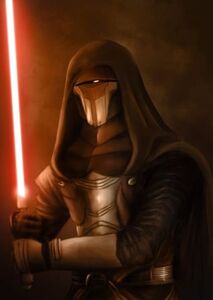 Revan with his lightsaber. 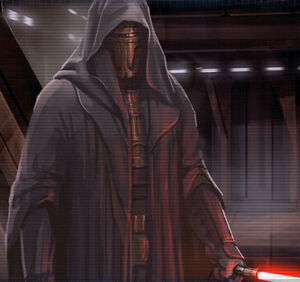 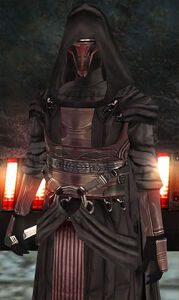 Revan with his armor in KOTOR. 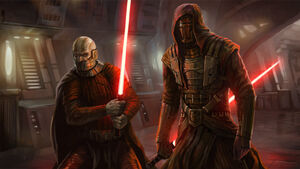 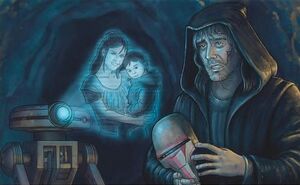 Revan watches the hologram of his family. 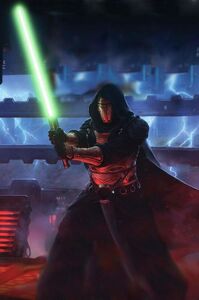 Revan facing off the against Sith Emperor. 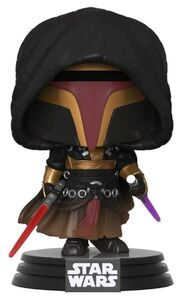 Darth Revan's Funko Pop.
Add a photo to this gallery

Retrieved from "https://villains.fandom.com/wiki/Darth_Revan?oldid=4125040"
Community content is available under CC-BY-SA unless otherwise noted.